Success in the streets: A hackathon for Sustainable Cities

#Hack4TheCity focused on the challenges and opportunities for sustainable growth in Uganda's cities. 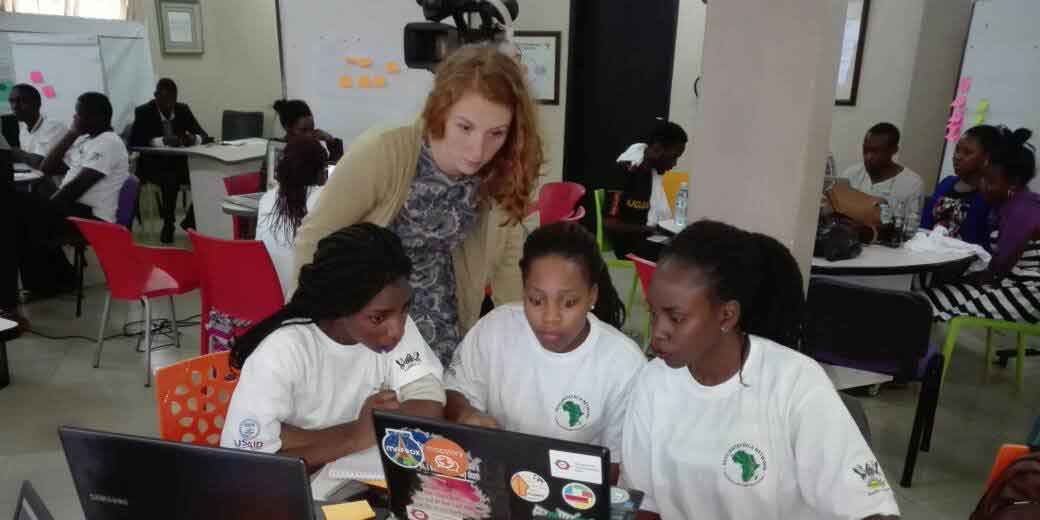 When I learned I would be AidData’s ‘point person’ for our joint hackathon with the ResilientAfrica Network (RAN) this summer, I was both excited and nervous, having never been to a hackathon before — let alone run one.

As a partnership between 18 African universities in 13 countries, RAN’s goal is to nurture and scale scientific innovations from those universities that strengthen the resilience of African communities to natural and man-made stresses. RAN’s Eastern Africa Resilient Innovation Lab (RAN Lab, for short), located at Makerere University in Kampala, Uganda, is one of AidData’s partners funded through USAID, and focuses on building community resilience to climate change and conflict.

AidData tapped me to run the Fourth Annual GIS Hackathon, where teams would compete in a design sprint to create web and mobile applications, web maps, GIS apps, and static maps that addressed a specific challenge using spatial visualization or analysis. With less than a month to plan time was limited, but I was optimistic we could design a hackathon that would be both fun to compete in and impactful.

I started by meeting with Natasha Kassami, Assistant Engagement and Research Officer for the RAN Lab, for some intense brainstorming. This was not Natasha’s first time working on a project of this scale, so her support would be vital. We decided to focus the hackathon on a Sustainable Development Goal that would be both interesting and relevant to applicants. (The Sustainable Development Goals are a set of global goals that 195 countries agreed at the UN in 2015 to achieve by 2030).

The seventeen Sustainable Development Goals will shape the next fifteen years of global development efforts. Image by the UN.

From Natasha’s experience, she knew that a hackathon worked best if the problem was relatable to all participants. Framing the challenge around Sustainable Development Goal 11 — which aims to “make cities inclusive, safe, resilient and sustainable” — did just that.

For one, SDG 11 lent itself well to incorporating spatial data, as understanding the spatial element to urban problems is key to finding solutions. The issue of sustainable cities was also tangible and pressing for the students and residents of Kampala who would be competing: Kampala’s population more than doubled between 2002 and 2014, to 2 million today. It is now the 13th fastest growing city in the world, and provides an estimated 60% of Uganda’s GDP.

But as people have flocked from the rural areas to Kampala, the city’s infrastructure and services are being stretched beyond capacity. By focusing on the challenges facing Kampala as an engine of growth for Uganda, #Hack4TheCity proved to be a salient theme for innovation.

With our theme and date set, we had 16 days to finalize the application process, create communications and instructional materials, and recruit applicants and facilitators. I agreed to hold five trainings in QGIS (a free and open source geographic information system) for RAN Lab interns and YouthMappers who were interested in participating in the hackathon but needed GIS software training. We invited four external judges and four additional facilitators to help run the hustle and bustle of the hackathon, including three AidData Summer Fellows working at other organizations in Kampala.

The morning of the hackathon kicked off at 8:45 am at the RAN Lab on Makerere’s campus, with a presentation from the Kampala City Capital Authority (KCCA) that gave some real-world context to the difficulties of managing urban infrastructure and service delivery. Participants could come in with prior ideas, but we encouraged teams to brainstorm outside their areas and keep an open mind to new solutions. By lunch, all seven teams had narrowed in on a proposed solution, and began to build.

The energy and drive in the room was palpable, as teams created a flurry of deliverables ranging from paper displays, to digital maps, to mobile app and website demos. Their ideas included solutions to crowdsource street problems; a new type of fire alarm system; ways to track medical supplies; and proposals for ride-sharing and better bus transportation information. There was even a way to improve garbage collection! Facilitators including myself circulated the room, helping with GIS and other questions to make sure everyone was staying on track and could finish on time.

At 5pm the bell rang — literally. Teams turned in their work, and drew straws to see who presented first. Each team had impressive solutions, but the winning proposal was a crowdsourcing app called Tag It. The app allows city residents to “tag” open manhole covers, flooded areas, potholes, and other typical street problems. Users can drop a pin, and add a symbol, picture, and description of the problem, with the information being sent to a government authority. (Since the hackathon, the RAN Lab has continued to work with Tag It and the app is getting ready for trial launch).

After a whirlwind three weeks of planning, the hackathon proved a success. The innovative ideas showcased GIS-based solutions, all with the aim of helping Kampala grow sustainably. Not only did the students learn new techniques for working with spatial data, but they also enjoyed doing it. I went home happy and proud of the students that participated.

Katherine Whitton is a second year Master’s student at the Lyndon B. Johnson School of Public Affairs at the University of Texas at Austin. This summer, Katherine worked with the Economic Policy Research Center and the ResilientAfrica Network (RAN) Lab in Uganda as an AidData Summer Fellow. The RAN Lab and AidData are two of eight development labs funded in partnership with the U.S. Global Development Lab under USAID's Higher Education Solutions Network.