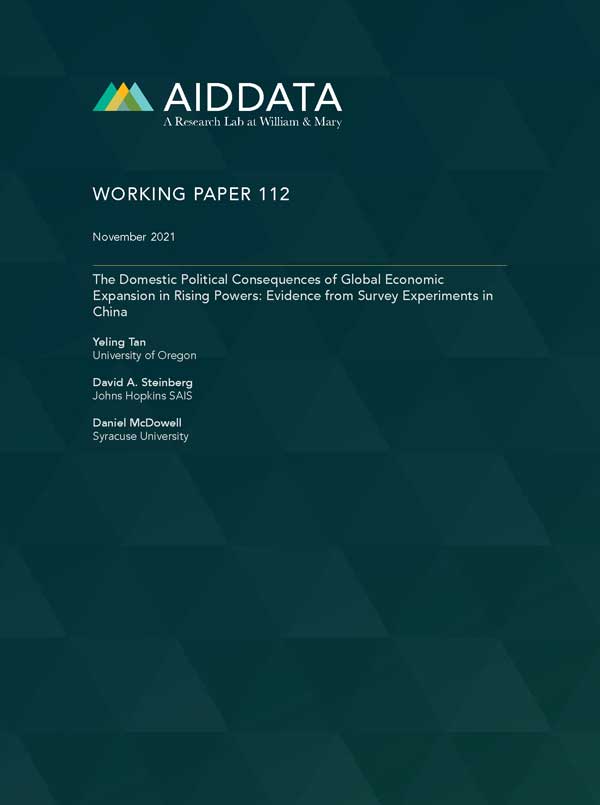 Rising powers typically seek to play a larger role in international economic affairs. This paper examines the domestic political consequences of rising states’ expansive foreign economic strategies. We argue that a successful global economic expansion can pay political dividends for national leaders, in the form of increased mass public support. However, when those efforts fail to increase the country’s global economic leadership role, national public opinion is likely to turn against the government. To test this argument, we fielded three original survey experiments in China, each focusing on one component of China’s expansive foreign economic strategy: the Belt and Road Initiative; the Asian Infrastructure and Investment Bank; and COVID-19 vaccine aid. Subjects either received no information about international economic efforts, or facts emphasizing either the success or failure of the three initiatives. In all three experiments, we find that information suggesting that China’s attempt to expand its role in the global economy have failed reduces individuals’ levels of government satisfaction. Our evidence suggests that this operates through a national identity channel: information about failed expansion lowers individuals’ level of pride in their nation, and this in turn reduces satisfaction with the central government. This study underscores the domestic political risks and rewards that rising powers like China must weight when expanding their country’s global economic presence.