A new video shows how to get subnational data on Beijing’s financial diplomacy, and generate granular country profiles to compare and contrast China’s overtures between and within countries. 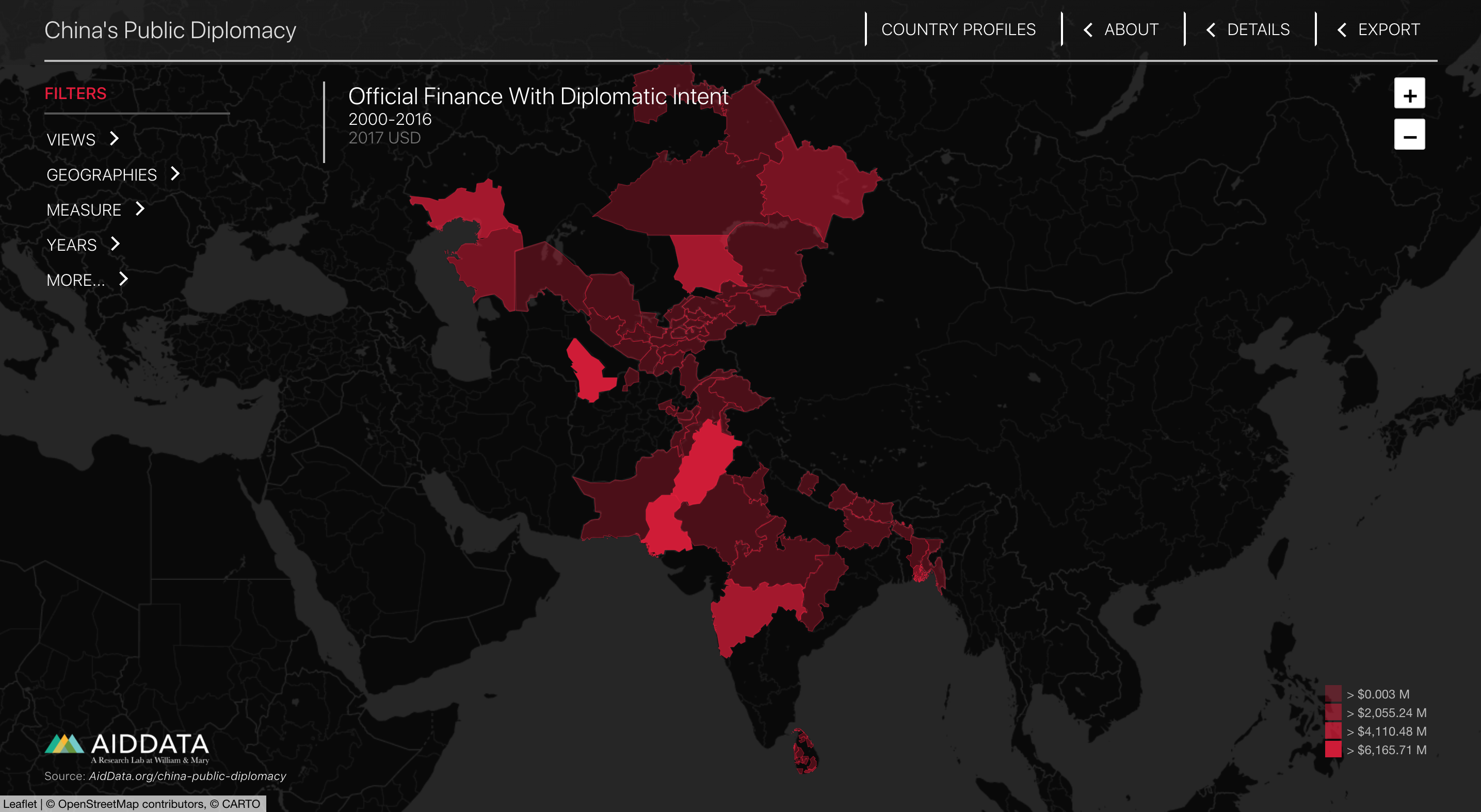 Last week, AidData released an extensive new study, Corridors of Power, on Beijing's efforts to cultivate and deepen economic, social, and network ties with 13 countries in South and Central Asia (SCA). These public diplomacy overtures, ranging from financing and education to culture and social media, seek to win over foreign leaders and publics in what Beijing considers its “greater periphery.”

This analysis was enabled by a unique dataset on China's economic and soft power tools. AidData plans to make this dataset publicly available early next year, to enable researchers, economists, policymakers, and journalists interested in China's foreign aid and development diplomacy to delve more deeply into the data.

In tandem, AidData’s interactive dashboard on China’s Public Diplomacy has also been updated with this dataset, allowing users to create and export visualizations and maps with the latest, comprehensive data on China’s soft power toolkit. Data for 39 countries in the Asia-Pacific (including 13 in South and Central Asia) is now available covering the years 2000-2018.

For the first time, users can visualize China’s financial diplomacy—arguably its most visible and controversial tool of public diplomacy—at the province and district level for countries in South and Central Asia. Data on cultural, exchange, informational, and elite-to-elite diplomacy is also available at the country level (and in some cases subnationally) for nearly 40 countries.

Get top-line findings from our new data and analysis in our blog.

AidData has created a video, embedded below, that walks you through (1) how to use the dashboard to get subnational data on Beijing’s financial diplomacy, and (2) how to generate granular country profiles to compare and contrast China’s overtures between and within countries. A transcript is included below the video.

Want to explore the full set of data behind the dashboard? You can download version 2.0 of our dashboard dataset here.

Hello, and welcome to another video from AidData. We’ve added new features to our China’s Public Diplomacy Dashboard that make it easier than ever to interact with data from our reports on China’s soft power toolkit to influence East Asia and the Pacific, as well as South and Central Asia.

I’ll guide you through some examples of how you can use the Dashboard to view subnational data on Beijing’s financial diplomacy and use the new recipient country profile generator to compare China’s public diplomacy overtures within and between countries.

Let’s start by using the dashboard to view subnational financial data in Pakistan. We are currently viewing the dashboard in its default setting, and you can see Pakistan received the largest amount of Chinese Official Finance with Diplomatic Intent between 2000 and 2017.

We start by opening the “Geographies” filter. Now we can select the level of administrative division at which we would like the data to be displayed. The dashboard offers two levels of granularity below the National level: admin 1 labeled “Province” and admin 2 labeled “District.” Let’s begin with the Province level.

Start by Deselecting All, then navigate to the South Asia region section, select Pakistan, and click Update. With the Province level selected, we can see China’s Financial Diplomacy efforts in Pakistan are concentrated on the country’s eastern side.

Now let’s drill down further. We can reopen the “Geographies” filter, select “District”, then “Deselect All”. Then navigate to the South Asia region section, select Pakistan, and Update. With the “District” level selected, we get the most granular picture of where China allocates its Financial Diplomacy within Pakistan.

The subnational view feature is not limited to being used for one country at a time. We can also view multiple countries at once to look for cross-border variations in China’s financial diplomacy.

Now, let’s explore the recipient country profile generator and one of the profiles it can create. You can open this feature by clicking the “Country Profiles” tab, located in the top right corner of the dashboard. This will open a new tab in your internet browser.

At the top of the profile, we provide a brief explanation of the data included, the reports where it was originally published, and the profile’s time period/Country specification. For added convenience, it also includes the appropriate citation for use in your own writing or presentations.

The profile also highlights the year in which Beijing’s financial diplomacy efforts peaked and the amount for that year.  We can see this occurred in Indonesia in 2009 when Beijing’s annual commitments reached $2.23 billion.

At the bottom of the Financial Diplomacy section, we also provide a definition of this type of Public Diplomacy and the original sources for the data. We provide similar data visualization and insights for the other types of Public Diplomacy Beijing deploys and the metrics AidData uses to quantify them.

We hope these new features help you gain valuable insights into Beijing’s public diplomacy efforts. To explore the dashboard, visit china-dashboard.aiddata.org. Thank you for watching! Please email us at info@aiddata.org or tweet us @AidData if you have any questions.