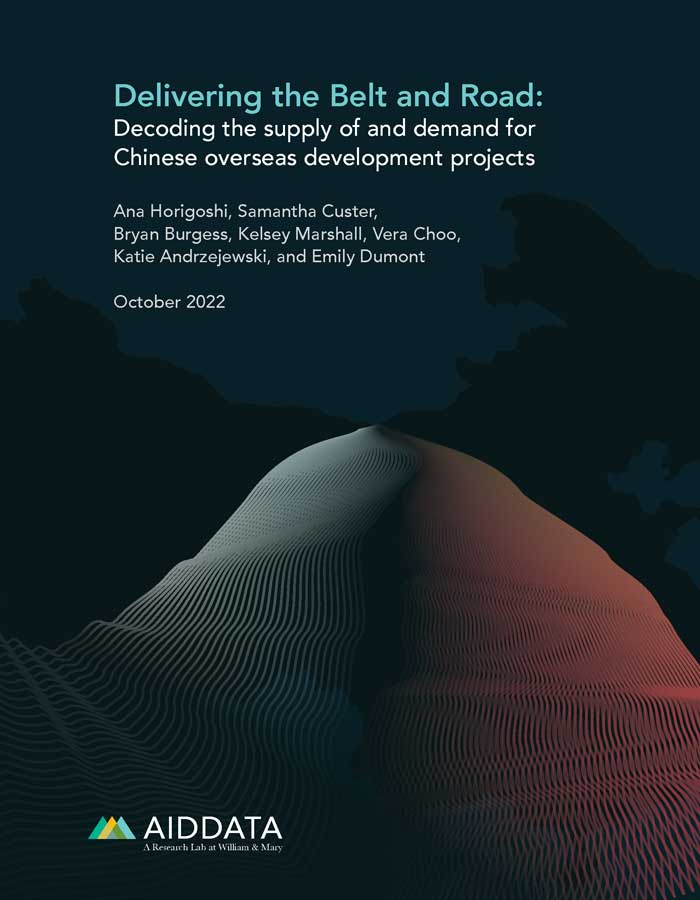 The “Delivering the Belt and Road” report provides new evidence on how Beijing has implemented the BRI in practice, how citizens and leaders view it—and where it might go next. 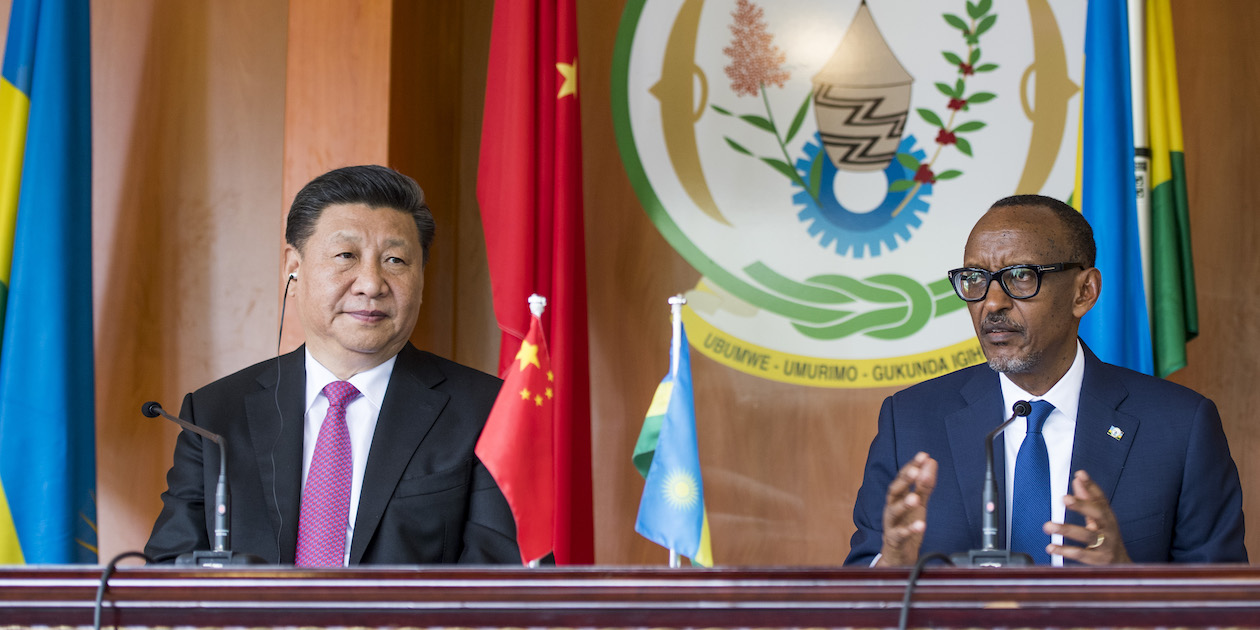 On top of headwinds at home, China’s image on the world stage is increasingly polarizing. Amid growing fears of a global recession, some 60 percent of low-income countries are at high risk of debt distress—or worse, already in it—according to the IMF and World Bank. All this comes as the Belt and Road Initiative (BRI), Xi’s flagship multi-billion-dollar “project of the century” that has been accused of being a contributor to the sovereign debt crisis, nears a decade old.

But how has China’s approach to overseas development evolved in the era of BRI, how are countries in the Global South responding to its overtures, and what does the future likely hold for China’s role as a leading financier of development? A new study by AidData, “Delivering the Belt and Road,” helps answer those questions. It decodes the supply of and demand for Chinese overseas development projects in relation to the launch of the BRI in 2013.

BRI: A new strategic direction, or a rebrand?

“BRI policies and speeches have made clear that the initiative does not end with just concrete and steel,” said Ana Horigoshi, a Senior Research Analyst and lead author on the report. “Our approach removes the noise of branding to reveal a substantial emphasis of BRI-like projects on connectivity in all forms, beyond just infrastructure alone.”

The authors find the launch of the BRI did not appear to have altered the character and composition of China’s overseas development projects, both in terms of who and what it funded and on what terms. In this respect, the BRI was more of a rebranding than a change in strategic direction.

“Taken together, these data points reinforce our starting hypothesis that Beijing’s interest in bankrolling projects along the five thematic areas of the BRI did not begin with Xi Jinping’s speeches invoking the Silk Road Economic Belt and the Maritime Silk Road,” said Samantha Custer, Director of Policy Analysis and a co-author of the report. “If anything, the BRI might be considered more of a formalization or reification of a strategic trajectory that began almost a decade prior.”

The study’s authors leverage a unique AidData dataset of over 13,000 Chinese state-financed projects between 2000 and 2017 for their analysis, comparing projects that are “BRI-like” in intent regardless of when they occurred and in what country. Unlike previous efforts to measure BRI funding, this systematic approach classifies projects as BRI-like if they correspond to clearly identified thematic foci laid out in key speeches and strategic frameworks introducing the BRI to the world.

Perhaps reflecting the BRI’s significant expansion, China’s standing as a development partner has increased in recent years in the eyes of its Global South counterparts.

Seventy-six percent of leaders who interacted with China in 2020 thought it was quite or very influential, making it the second highest-ranked bilateral donor in AidData’s Listening to Leaders Survey, behind only the US. China charted the single largest net improvement in influence between 2017 and 2020 of any development partner (+13 percentage points).

But one region in particular stands out for its high share of BRI member countries, large inflows of Chinese official finance, and majority share of local leaders (over 50 percent) who report receiving Beijing’s advice or assistance: sub-Saharan Africa.

To delve deeper into how leaders across the African continent assess China as a development partner, AidData fielded the BRI Perceptions Survey in July and August 2022. Nearly 900 African leaders from 55 countries and semi-autonomous regions provided timely insights on how active China is in their countries; whether they approve of Chinese leadership; their preferred development partners; and whether they find China’s development model attractive.

More than 75 percent of these leaders reported that Beijing had financed more projects in their countries over the past decade and that the average dollar value of these investments had also increased. With this backdrop in mind, the poll asked African leaders whether and how their views of China as a development partner had changed, in light of its support of the COVID-19 response in their countries.

Notably, over two-thirds of respondents said they had a more positive view of China now than previously, because of how it helped their country in navigating COVID-19 response and recovery. Consistent with media reports, when asked for specifics about Chinese support, donations of personal protective equipment (i.e., masks, face shields) as well as vaccines were most-cited by respondents. This was followed by donation of other medical supplies or equipment for hospitals and clinics, noted by nearly half of respondents.

“The PRC and the US clearly stand out in the eyes of African leaders, who viewed them as the most active in supporting their country’s development over the past decade,” said Custer. Over three-quarters of African respondents said they viewed China and the US as highly active, compared to roughly 60 percent for the UK and France.

Yet African leaders view development partners as having very different value propositions, based on their specialized expertise. China is a clear stand-out on infrastructure: forty-six percent of respondents identified it as their preferred partner in the energy, transport and telecommunications sector, with France and the US as distant second and third choices (16 and 8 percent).

But Beijing is an afterthought for African leaders seeking partners on governance and rule of law. Only 1 percent of leaders selected China as their preferred partner for projects in this sector.

“This revealed preference for working with Beijing on infrastructure and Washington on issues of governance and rule of law is consistent overall across the African continent,” said Kelsey Marshall, Program Manager and a co-author of the report, who helped implement the BRI Perceptions Survey.

China’s new Global Development Initiative (GDI), launched by President Xi in 2021 and seen by many as a successor to the BRI, has sought to portray Beijing as a global leader in sectors such as climate change, green development, health, and governance. Yet fewer than 10 percent of African leaders selected Beijing as a preferred development partner in health, education or social protection.

What’s more, African leaders see significant negative environmental impacts of Chinese official finance projects in their countries. Roughly half of respondents reported experiencing projects bankrolled by Beijing as detrimental to the sustainable use of natural resources (53 percent) and protection of wildlife, forests, and oceans (49 percent), as well as increasing their country’s vulnerability to climate change (46 percent).

In 2022, the future of the BRI appears less certain. It faces major headwinds: economic slowdown and negative publicity, with a spate of borrowing countries in debt distress as they struggle to repay loans. While Beijing’s role as a financier of global development does not hinge on the fate of a single initiative, where will it go from here?

The report’s authors make some recommendations. “China should be mindful to not lose sight of its comparative advantage in facilitating connectivities—physical, digital, people-to-people—in the eyes of its partner countries,” said Custer. China’s emphasis on continued pandemic recovery is a savvy move, building on the positive momentum it gained with leaders in the Global South from how it assisted with their COVID-19 response.

But Beijing must proactively address key vulnerabilities in the way it delivers assistance, which not only creates negative spillovers for its partners but also increases the risks to China. “The fact that African leaders view less local capacity and lack of transparency to be drawbacks of working with Beijing is problematic, as is the finding that they see PRC-financed projects as worsening corruption and environmental degradation in their countries,” said Custer.