Harnessing open data to help the most vulnerable in Uganda

One organization in Kampala is working to make open data more usable and accessible for citizens. 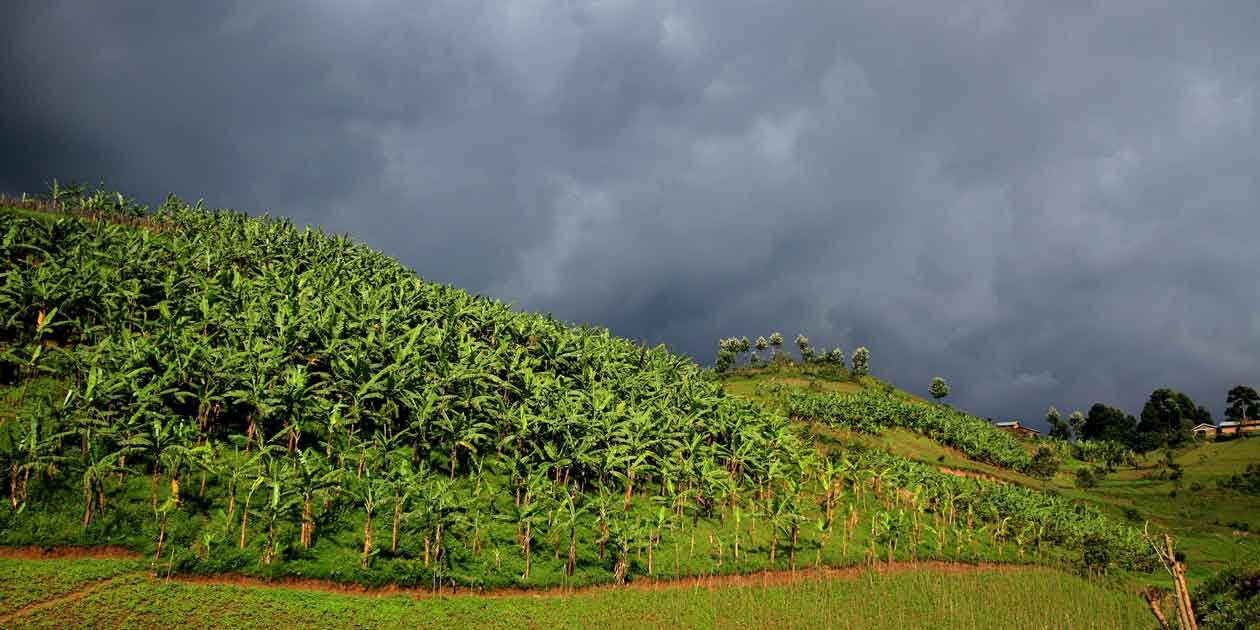 A storm gathers over farmland in the hills near Lake Mutanda, Uganda. Uganda’s farmers are under threat from increasing extreme weather events. Photo by Adam Cohn, licensed under (CC BY-NC-ND 2.0).

Surrounded by high fences, the imposing lines of the Ugandan Ministry of ICT building stand apart from its neighbors in Kampala. Would-be visitors must pass two rounds of security checks to reach the inside.

Yet this physically walled-off institution is at the center of a new surge in openness. In response to concerns of corruption and mismanagement of funds, the Ugandan government is moving to make all government data open to the public. The Ministry released the first draft of the country’s new Open Data Policy in May 2017. By 2020, Uganda plans to switch to an open-by-default data policy, where data surrounding all research done by publicly-funded institutions will be openly available on the Internet. But will this new culture of open data really be useful and usable by ordinary Ugandans?

One organization advocating for accessible and relevant open data is the Open Sustainability Institute (OSI) in Kampala. OSI specifically aims to make critical resilience and climate change knowledge available and understandable to those who need it most: Uganda’s farmers, agricultural workers, and others who live off the land.

OSI’s founder, Rushongoka (Rusho) Wa-Mpiira, recalls a trip to Eastern Uganda with his friend Michael Otti in 2013 that illustrated plainly for them Ugandans’ need for open data and ultimately catalyzed OSI’s current work.

Hiking through the foothills of the Rwenzori mountains, Wa-Mpiira and Otti passed an older woman carrying bamboo sticks. Curious, they struck up a conversation. They learned that Margaret, a widow and mother of six, was a farmer of land higher up on the mountain. Margaret was perplexed that her once fertile land was now failing to grow crops. She did not know why exactly her crops were struggling, or why the bees were disappearing. All she knew was that her land was “old land,” and that it had stopped producing food.

After returning to Kampala, the pair kept coming back to Margaret’s story. “[It was] not just about Margaret. She is a representation of thousands of Ugandans who have been affected by climate change. There at the foothills, we had nothing to give her, but her memory stayed with us long after the trip,” recalled Wa-Mpiira. They realized that Ugandans needed better knowledge about climate change and the tools to adapt their livelihoods to a changing environment.

While agriculture is a core industry in Uganda, the country lacks large-scale commercial farming. The sector mostly consists of small-holder farmers like Margaret who rely on subsistence farming, along with selling cash crops, to survive. Ugandan farmers depend on the natural patterns of rainfall and weather, but climate change has made these much more erratic. Many farmers are now unable to rely on their historical knowledge for the best time or best crops to to plant, and face long months of famine.

The information Margaret needed to make decisions about her crops can be found in the terabytes of weather, soil and other agricultural data collected by scientists and development workers. But for someone like Margaret, who has never touched a computer or worked with a CSV file, what good would open data do?

OSI believes one solution is their Open Knowledge Platform, where the public can upload short 2-5 minute videos with direct and relevant advice for sustainable agriculture and living. Since most rural farmers do not have Internet access, these videos are also shown at cinema halls or other community places where people gather. OSI also makes regular sustainability journeys across Uganda to directly train individuals.

“We cannot do our best work sitting in our offices in Kampala. So we go to these rural villages across Uganda to spread knowledge and get information on how farmers are coping,” explained Wa-Mpiira.

As climatic patterns continue to change, Uganda’s farmers will need the data and tools to adapt. Open data revolutions fail when they do not address the people who need information the most. OSI’s work — not only advocating for open data, but also engaging in mass collaboration to make that data scalable and consumable — is helping Uganda’s open data efforts move in the right direction.

Editor's Note: This research was made possible by generous support from the United States Agency for International Development (USAID) U.S. Global Development Lab and the William and Flora Hewlett Foundation.

Hina Acharya is a first-year Master’s student at the Lyndon B. Johnson School of Public Affairs at the University of Texas at Austin. This summer, Hina worked at the Open Sustainability Institute as an AidData Summer Fellow.