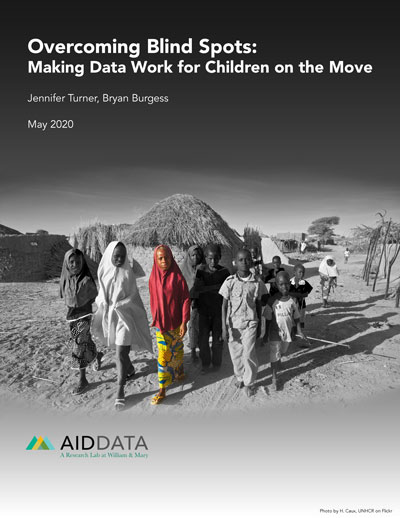 Overcoming blind spots in how we produce and use data about refugee and migrant children will help decision makers better direct resources to them. 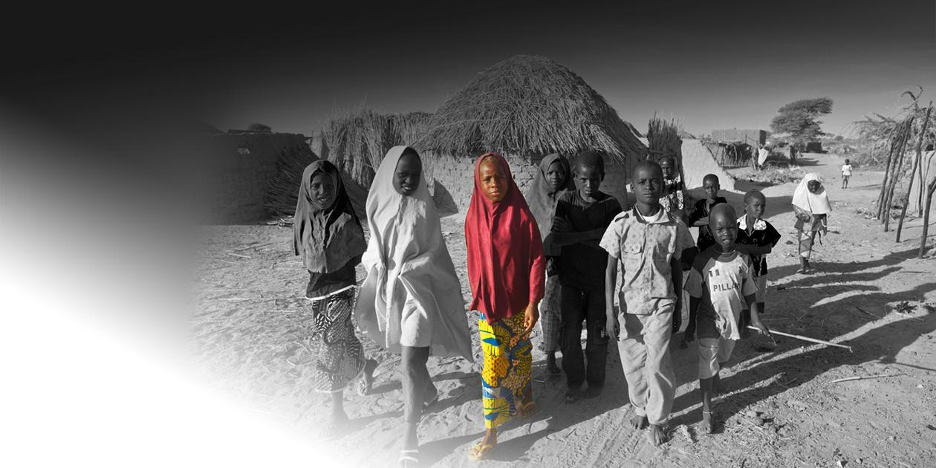 By the end of 2018, more than 31 million children worldwide had been forced out of their homes or displaced due to violence and conflict. According to UNICEF, children now represent half of all refugees, and their numbers have more than doubled since 2005.

These “children on the move” need life-stabilizing and life-saving aid and services, but we lack data on who they are, where they come from, where they live now, and what specific resources they need. Many countries do not have reliable statistics for even the number of child refugees or internally displaced children and their ages. Gaps in information on these children make it difficult for decision makers to identify vulnerable groups and target aid to them.

To better understand the data available on these children, and why decision makers do not or cannot use it, AidData has conducted a study of what is needed to make data work for children on the move at the global level. AidData’s work to better understand the data needed for assistance programs seeking to help refugee, displaced, and trafficked children was funded by a two-year, nearly $500,000 grant from the Oak Foundation Children on the Move Fund of the Tides Foundation.

The new policy brief, Overcoming Blind Spots, works to bridge the gap in understanding between data production and use, highlighting key limitations in the current data landscape, as well as challenges decision makers face in using data to help children on the move. The brief also recommends steps organizations can take to improve the production and use of data related to these children. A related data inventory serves as a practical reference guide for policymakers on the data available on children on the move and how they might draw insights from broader census, household, and administrative data, as well as new and innovative sources of data such as remote sensing and predictive analytics.

“There is a growing international consensus that we need to improve data on children on the move,” said Jennifer Turner, AidData Program Manager and co-author of the study. “Despite increasing efforts, too much of the current conversation centers solely on improving data production, rather than on how practitioners can better use data to reach children on the move. While this is important, without a stronger focus on who is using the data and for what purpose, these efforts will not translate into better outcomes for vulnerable children.”

“Children on the move” is an umbrella term covering a broad range of children moving within and between countries, including child refugees,  internally displaced children, victims of child trafficking, and child migrants.

To see how practitioners use data to reach these populations, AidData interviewed individuals from 74 organizations conducting research, policy, or project implementation involving children on the move in three case study countries: Colombia, Jordan, and Nigeria. These were selected as focus countries, as they have very different populations of children on the move and data landscapes: Colombia is home to large numbers of people internally displaced by long-running conflicts between the government and paramilitaries, as well as 1.3 million recent Venezuelan refugees; Jordan has one of the highest numbers of refugees relative to its native population, including Syrian refugees fleeing ongoing civil war; and Nigeria has the largest population of IDPs in West Africa and is both a source and destination for large numbers of child migrants.

AidData’s study finds that interviewees working with children on the move overwhelmingly believe that existing sources of data are insufficient to inform critical decisions. Basic data is often unavailable, and data that does exist is often incomplete, out of date, or missing sufficient demographic and geographic details. What’s more, frequently differing definitions, data collection methodologies, and indicators make producing comparable data difficult. Decision makers are often uncertain about which data to use, as organizations promote different statistics without transparent methodologies or third-party validation.

“When it comes to why decision makers do not use available data, we found that two reasons rose to the top: decision makers lacked the bandwidth to work with data, and also lacked trust in the accuracy of data,” said Bryan Burgess, AidData Junior Program Manager and co-author on the report.

Inaccurate data, whether due to technical deficiencies in data collection or intentional misrepresentation, and a lack of transparency surrounding data production were all found to contribute to distrust of the available data. For example, multiple interviewees in Nigeria reported that data accuracy varied greatly among states due to differing technical capacities at the local level; in Jordan, some interviewees believed that the government opposed efforts to improve the reliability of refugee statistics, because more accurate statistics could put a ceiling on incoming funds.

Many prospective users place a low priority on data, due to a lack of human resources and bandwidth, and even when decision makers want to use data, they may have trouble accessing it, as AidData’s analysis finds. Significant privacy concerns restrict data sharing. Organizations may also limit access to their data to maintain a competitive edge, with interviewees in all three case study countries citing interagency rivalry as a major barrier to greater data sharing. This “culture of information secrecy,” as described by one interviewee in Jordan, leads organizations to restrict the release of data or detailed descriptions of data collection methods or publish only sanitized data.

To overcome these shortfalls in supply and demand of data, AidData’s study makes several recommendations to improve data production and to help decision makers more easily use data and improve outcomes. One is to increase incentives for data transparency and information sharing. Donors could play an important role in incentivizing governments and organizations to not only increase the transparency of their methods, but also facilitate data sharing by tying it to their funding decisions.

Other actionable recommendations focus on avenues for increasing data literacy among those working with children on the move, as well as pushing for interagency groups and common information management systems to harmonize standard terminology and data collection practices to make data more comparable.

In late 2019, AidData convened a working group with representatives from international organizations to present findings and recommendations from this study and ensure that the recommendations made align with the needs of organizations working on issues related to children on the move. Earlier this week, AidData held a virtual panel discussion between practitioners and funders to discuss how data on children on the move is or isn’t meeting their needs, and how funders can play a role in encouraging better data collection and use to support these children.

Later this year, AidData will conduct targeted, one-on-one consultations with specific organizations working with children on the move, in order to share findings from the brief with key decision-makers and increase knowledge and interest in data use for children on the move.

Sasan Faraj is a student at William & Mary (Class of 2023) and the Partnerships and Communications Intern at AidData. He is pursuing a double major in data science and international relations.