Shining a spotlight on global inequality in the fight against HIV/AIDS: the view from Somaliland 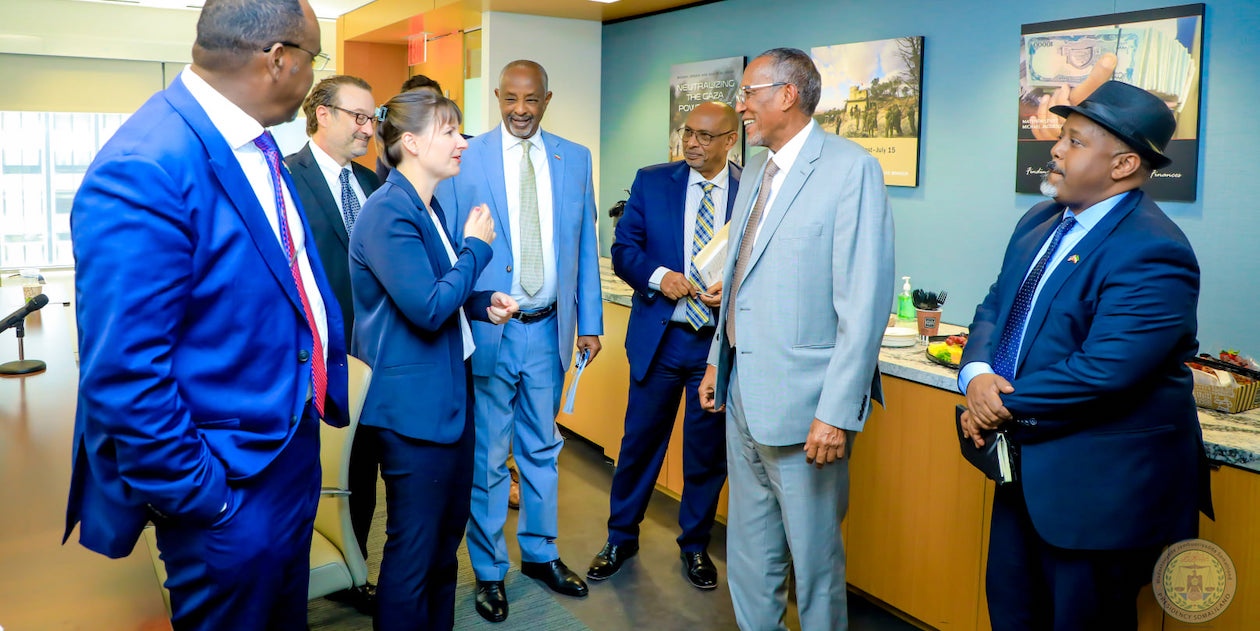 The President of Somaliland, Muse Bihi Abdi, meets with individuals at the Washington Institute for Near East Policy in Washington, DC during a March 2022 visit. Photo by SOLNAC (Somaliland National AIDS Commission), used with permission.

Editor's note: This guest post is by Dr. Ismail Muhumed Ayeh, the Executive Director of Somaliland's National AIDS Commission; Carrie Dolan, Assistant Professor of Kinesiology at William & Mary and Director of the Ignite Lab; and Alex Wooley, the Partnerships and Communications Director of AidData.

Today is World AIDS Day. UNAIDS is marking the occasion with the slogan “Equalize”, a call to address inequalities in who, globally, gets tested and helped. Meanwhile, the WHO’s theme is “Putting Ourselves to the Test: Achieving Equity to End HIV,” encouraging people to “unite globally to eliminate the disparities and inequities that create barriers to HIV testing, prevention, and access to HIV care.”

Both World AIDS Day themes resonate with the Somaliland National AIDS Commission (SOLNAC), a small governmental body with an enormous mandate: controlling HIV infection rates in the country. From its headquarters in Hargeisa, SOLNAC is responsible for research, prevention, intervention, treatment, advocacy, outreach, and communication to all 3.5 million citizens.

But what do broad themes of equality mean to a country where widespread poverty and high levels of stigma stimulate the spread of HIV?

In this environment, people living with HIV and those perceived to be at higher risk face increased discrimination in areas like medical care, housing, and employment. Equality demands customized interventions that address not only resource constraints and high HIV burdens, but also more severe stigma. Unfortunately, with the global economic recession brought on at least in part by COVID-19, significant uncertainty remains in donor government funding to support customized interventions. Even more, uncertainty surrounds how equitable distributions of limited donor funding will be determined. In Somaliland, SOLNAC has seen how global inflation particularly affects the PLHIV (People Living with HIV) population, the majority of whom live below the poverty line. Remittances from family members living abroad, a major source of Somaliland’s GDP, have simultaneously taken a hit as hard times affect countries worldwide.

SOLNAC, in partnership with William & Mary (W&M), is aiming to shine a spotlight on inequality by increasing local capacity to understand the drivers of local HIV epidemics, identify gaps in services among those most likely to acquire and transmit HIV, and provide evidence to support tailored interventions to reduce HIV transmission. This includes incorporating and expanding on tools and methods that AidData has developed and incubated, for example through spatial layer integration.

W&M’s Ignite lab has as one aim to work with SOLNAC to address the lack of routine surveillance data, an urgent need as the lack of local information significantly limits national efforts to scale up effective HIV programs. Ignite would work with SOLNAC to build research administration and management capacities, research integrity oversight, and biostatistics and data analysis capacities by training local stakeholders who want to know where to target resources to prevent new HIV infections.

With limited resources, SOLNAC works hard to battle the stigmas associated with HIV/AIDS for people living with HIV. It is an uphill challenge: a 2020 health and demographic survey found that 49 percent of women aged 15-49 have negative attitudes towards people living with HIV, and 64 percent of women aged 15-49 have reported not buying fresh vegetables from a shopkeeper living with HIV. The Commission employs several strategies to make the best use of limited resources. This year, SOLNAC was able to incorporate a quarterly nutrition support program for PLHIV, a measure that has the effect of encouraging them to stick with their treatment. Covering basic needs is critical: 72 percent of PLHIV in Somaliland are not engaged in any form of employment at all.

SOLNAC leverages its responsibility to act as an inter-agency coordinator among national government ministries and agencies. This includes working with the Ministry of Education to integrate HIV education and awareness into the national school curriculum. SOLNAC recently established a working relationship with the Ministry of Religious Affairs and many of the country’s religious leaders to jointly combat misconceptions among the population on how HIV is transmitted. The aim is to shift the narrative which, until now and especially among the less-educated, has been one where HIV is seen as an act of God. Having the religious community as SOLNAC’s partner is important, as the majority of people in Somaliland obtain their information from mosques, which they consider their most reliable and trusted source. There are encouraging early signs that this joint community awareness and advocacy effort will reduce stigma and discrimination and increase testing rates.

SOLNAC also coordinates and acts as liaison with UN agencies and international and national NGOs to prevent duplication and overlap of projects and services and ensure smarter allocation and targeting of resources.

SOLNAC has responsibility for coordinating and harmonizing HIV/AIDS data collection efforts across Somaliland and seeing that these data inform policy making, facilitate sub-national targeting, resource allocation, program, management, monitoring and evaluation. Public health infrastructure is lacking in Somaliland, as are resources, tools, and technologies, the combination of which puts lives at risk.

Research is a high priority in the National Strategic Plan (NSP) for the Somaliland HIV and AIDS Response (2021-2023). Among other elements, it mandates SOLNAC and its partners to:

While HIV incidence rates in Somaliland appear low, to some degree we are flying blind: there are gaps at each stage of the evidence-gathering and analysis continuum. There are no precise indicators of the prevalence of HIV/AIDS, partly due to fear of stigma, victimization, and social discrimination.

There are approximately 4,000 HIV tests conducted per year in Somaliland—a small number. In Somaliland, women are most vulnerable to HIV, but less than 30% of vulnerable women have ever had an HIV test. HIV testing kits are only available in 20 health clinics in the entire country. Resources are needed in order to generate greater rates of provider-initiated and self-test HIV kits. But there is also a fear of testing, so that in addition to more facilities and supplies, we need quantitative and qualitative research to better understand how we can increase rates of testing and treatment through targeted communications and outreach.

Routine collection of surveillance data is limited, and there is no precise geospatial mapping of incidence and treatments. This is key, because in other national and sub-national contexts the epidemiological data consistently points to geographic clustering of HIV. The lack of local information significantly limits Somaliland’s national efforts to scale up effective HIV programs.

SOLNAC also needs national and sub-national HIV databases with information that can be disaggregated by age, sex, region, district, etc. Information gaps like these affect not only national ministries and agencies but also international organizations like UNAIDS, WHO and The Global Fund, impeding our understanding of the state of the disease and the most effective response in a critical part of East Africa.

The people of Somaliland are young—nearly half under the age of 15 and 75 percent under 30. They are smart and ambitious, keen to build their country. But in a refrain common to many  Global South nations, SOLNAC faces challenges recruiting and keeping top staff. The Commission is heavily and unnecessarily dependent on external experts and consultants. In-house qualitative and quantitative measurement capacity is weak. In addition to brain drain, trained health professionals are lost to the private sector or international donors, multilaterals, and NGOs. These challenges illustrate the need for more research training, as limited research capacity is constraining the ability of SOLNAC to allocate limited HIV resources where they will have the most impact.

Given these challenges, how does a low-income country such as Somaliland meet the call to action for equality issued by World AIDS Day and ensure it is not forgotten for the other 364 days in the year?

Equality starts with the implementation of a platform that informs the gaps and strategies unique to specific populations, cities, regions, and countries in order to scale-up interventions and services that will achieve epidemic control. National-level data are available to inform the HIV response, but local data at the district level are often unavailable or inadequate. The lack of granularity at the district level prevents the strategic use of resources. Local programs do not know the characteristics of those most likely to acquire and transmit HIV or where to reach them. Although the HIV epidemic is global, all transmission is local. To be effective, local responses should be tailored to the local context and guided by empirical evidence and epidemiological principles. This approach dovetails well with one of the goals of UNAIDS World AIDS Day 2022—to “ensure the sharing of technology to enable equal access to the best HIV science, between communities and between the Global South and North.”

Inequalities between the Global North and South have received renewed attention in recent years in a number of areas: COVID-19 vaccine access and treatment, for example. Another is around climate change, as we witnessed at the recent COP 27 conference, where poorer countries came together to demand more resources for a crisis the cause of which they share little of the blame but much of the catastrophic effects. Somaliland, for example, is being devastated by drought, especially in the eastern regions. Meanwhile, the burden of HIV falls particularly heavy on some populations and geographies. As UNAIDS notes elsewhere, young women in Africa remain disproportionately affected:“in 19 high-burden countries in Africa, dedicated combination prevention programmes for adolescent girls and young women are operating in only 40% of the high HIV incidence locations.”

All three of these crises are global in nature and, in an interconnected world, require concerted, collective responses, sufficiently resourced and tailored to local environments and circumstances.

Dr. Ismail Muhumed Ayeh, MD, MPH/HP is the Executive Director of SOLNAC. He is also the Dean of the Medical School at Amoud University, in Borama, Somaliland, an OB/GYN, and a former Director of Borama General Hospital.

Carrie Dolan is an Assistant Professor of Kinesiology and Health Sciences and the Director of Ignite, a global health research lab at William & Mary’s Global Research Institute. Most recently Ignite has conducted research on global health resource allocation in St. Vincent and the Grenadines and in sub-Saharan Africa.