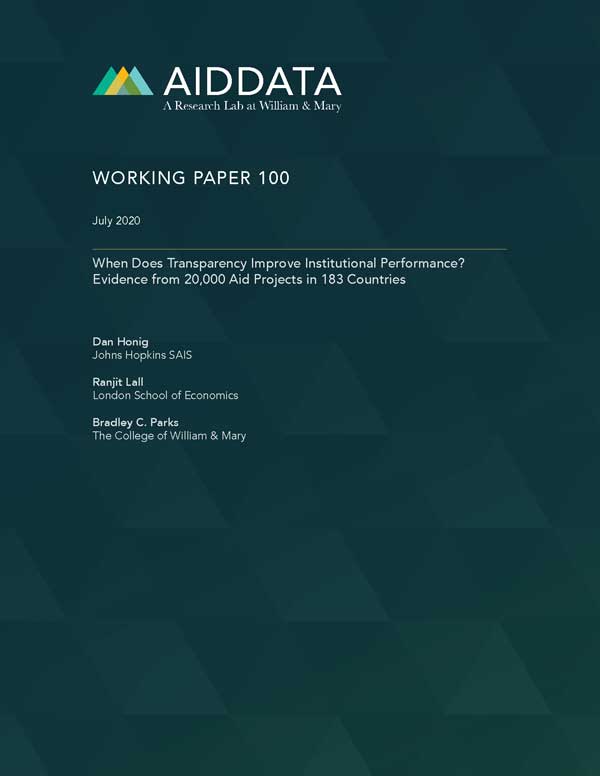 Testing transparency’s benefits: When does it truly improve how institutions perform?

Transparency and policies to promote it are usually believed to have many upsides and few to no drawbacks. Predicated on that assumption, access to information (ATI) policies have emerged as the most prominent form of institutionalized transparency in governments and international organizations worldwide.

ATI policies are often praised for strengthening transparency, accountability, and trust in public institutions. By guaranteeing the right to request information from institutions, these policies are thought to create new opportunities for stakeholders to monitor bureaucratic activities, bringing the disinfectant of sunlight to government activities and transforming the public’s relationship with the public sector itself.

Yet empirical evidence that ATI policies really improve institutional performance is mixed: some studies find they make bureaucracies more efficient and less corrupt, but others report the opposite of a desired effect, with increases in corruption and degradations in bureaucratic quality and decision making. When and why do policies for greater access to information actually improve how institutions perform?

A new paper, published last month in the American Journal of Political Science (AJPS), uses a novel dataset on the performance of more than 20,000 aid projects financed by 12 donor agencies in 183 countries from 1956-2016 to answer that question. An earlier version of the study was previously published as an AidData Working Paper; since 2014, the working paper series has published 115 papers, 57 of which have been revised and published in leading peer-reviewed journals such as AJPS.

In their article, When Does Transparency Improve Institutional Performance? Evidence from 20,000 Projects in 183 Countries, the authors—Dan Honig of University College London, Ranjit Lall of LSE, and Brad Parks of AidData—investigate the conditions under which ATI policies empirically improve the performance of public institutions.

ATI policies themselves establish a formal process where public or private actors in any country can request information from donor agencies about the projects they finance, and they are frequently used by both bottom-up actors (citizens, CSOs, media, and academic) and top-down actors (governments, international organizations).

The authors find that enforcement is key: development agencies that adopt access to information policies see better project outcomes, but only when these policies include an independent appeals process for denied information requests. The researchers also uncover evidence that, anticipating ATI requests and appeals, project staff actually adjust their behavior in advance: aid agencies, recipient governments, and others responsible for project delivery preemptively take steps to address design and implementation problems that could be exposed by ATI policies down the line.

What’s more, the presence of ATI policies with mechanisms to appeal denied requests is found to pay dividends in improved project performance specifically in contexts where bottom-up collective action is easier for external actors and the existing mechanisms of project oversight are weak. Ultimately, the authors argue that an important barrier to the effective adoption of ATI policies is the failure of bureaucrats to comply with information requests that could expose poor performance—making the inclusion of an appeals process key.

To perform their analysis, Honig, Lall, and Parks needed to construct a very unique dataset: the Project Performance Database (PPD), Version 2.0, which is the world's largest dataset of development project outcomes to date. It is distinct among large datasets of foreign aid projects in that it provides a measure of overall project success, in the form of project outcome ratings of holistic project performance. The full 2.0 version of the dataset has been made available for download on AidData’s site here, and the previous 1.0 version is available via the Harvard Dataverse.

Because the 12 donor agencies in the PPD adopted ATI policies and appeals mechanisms at different dates, the researchers could identify the impact of transparency policies on project outcomes by comparing pre- and post-adoption trends in performance ratings. This staggered difference-in-differences approach, exploiting temporal variation in the rollout of ATI policies and the wide temporal scope of projects in the PPD, allowed Honig et al. to identify the policies’ true impact on a large, diverse and lengthy sample of performance outcomes.

Honig et al.’s findings suggest that ATI policies can help repair the broken feedback loop between public institutions and their stakeholders by reducing information asymmetries. But crucially, the fix requires more than just the ability to ask for information from institutions: toothless ATI policies that lack enforcement mechanisms do not appear to lead to better project performance. Only when ATI policies are accompanied by robust recourse mechanisms, in the form of independent appeals processes, do benefits accrue, as bureaucrats are frustrated from avoiding complying with valid requests for information.

This new research supports an important emerging consensus that information and bottom-up monitoring alone are “not enough” to move the needle. Both bottom-up monitoring and a mechanism for top-down enforcement are necessary for holding public institutions accountable. The study adds to others in the literature that have found transparency interventions, like ATI policies with independent appeals mechanism, are most effective when enacted in contexts with higher civic engagements, greater press freedom, and other kinds of bottom-up accountability that make it easier for citizens to take advantage of the policy and appeals process.