Untangling the complex relationship between aid and conflict with subnational data

Outside actors frequently try to address the causes and consequences of civil conflict by offering aid to “one side” or to innocents caught in the middle. However, there are still some unanswered fudamental questions regarding aid's real effect on conflict. 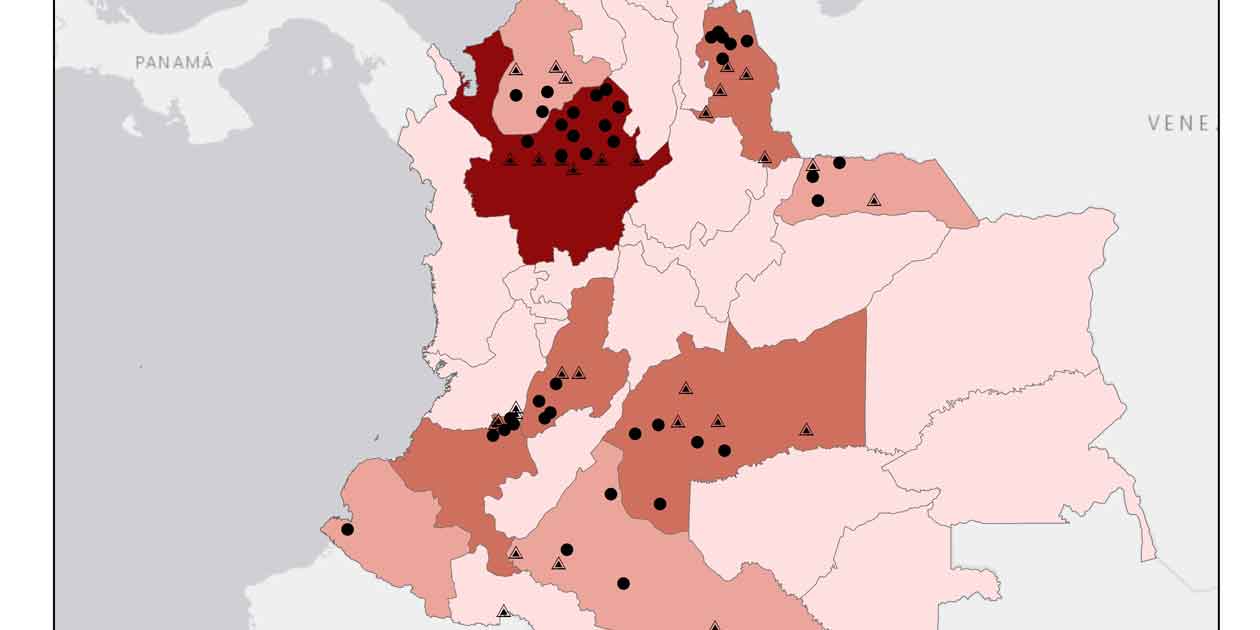 This map of RGA departments and municipalities within Colombia was generated using GADM administrative boundaries.

Outside actors frequently try to address the causes and consequences of civil conflict by offering aid to “one side” or to innocents caught in the middle. But the international community is still searching for answers to several fundamental questions: When does aid inflame conflict? When does it dampen conflict? Can aid tilt the scales in one direction or another?

To address these questions and many others, the Center for International Development and Conflict Management (CIDCM) at the University of Maryland has released a new book, Peace and Conflict 2016 (Routledge). Several AidData faculty and staff contributed to this publication. In a chapter entitled “Foreign Aid and Conflict: What We Know and Need to Know,” AidData's Brad Parks, Caroline Bergeron, and Michael Tierney take stock of the existing state of knowledge and call for more studies that untangle the multi-faceted and multi-directional relationships between aid and conflict by leveraging newly available sub-nationally georeferenced data.

In order to illustrate how subnational data and analysis can be useful, consider Colombia, a country that has experienced over 50 years of violence and instability and is now inching closer to sustained peace and prosperity. The animated map provided below uses 2006-2013 conflict event data from UCDP and AidData’s geocoded dataset of aid flows to Colombia. (From 2014 to 2016, under a Minerva Initiative grant from the US Air Force Office of Scientific Research to a consortium headed by the University of Maryland/CIDCM, AidData geocoded the aid information management systems of seven fragile and conflict-affected countries, including Colombia.)

The blue dots on the map represent aid-funded interventions in two sectors: (a) government and civil society, and (b) conflict prevention and resolution, peace and security. The red dots represent conflict events.

This data visualization reveals that many conflict events during this period of time were located in rural areas and near the country’s borders with Venezuela and Ecuador. One can also see instances of violence near Bogota, Medellin, and Cali, and relatively few conflict events taking place east of the Andes. At the same time, it's apparent that in the baseline year (2006), aid projects designed to improve governance and reduce violence are concentrated near cities and conflict hotspots. As time elapses, no additional aid projects (in these categories) are observed until mid-2008 in Cali. Then, a sudden influx of aid arrives in late-2008, followed by several conflict events.

This mapping of the subnational distribution of aid and conflict over time raises several questions:

With these questions in mind, it is also worth considering how social scientists are now using sub-nationally geocoded data and rigorous methods of causal inference to evaluate the effectiveness of aid programs in Colombia and other countries plagued by conflict and instability.

In partnership with the USAID Mission in Colombia, two AidData Research Consortium members, Dr. Joseph Young and Dr. Michael Findley, are currently conducting a geospatial impact evaluation of a program that aims to improve governance in 40 conflict-affected municipalities from 2015 to 2019. This program is designed to expand the reach of the state into traditionally rebel-controlled areas. By matching municipalities that received the program (the treatment group) with similar ones that did not (the control group), researchers will be able to create a credible counterfactual that makes it possible to estimate the causal impact of the USAID/Colombia-funded program.

This impact evaluation will answer a crucial question – whether increased municipal governing capacity and legitimacy contributes to reduced violence and improved stability. The insights from this study will also provide a valuable source of evidence that can inform the design of future programs to improve the capacity and legitimacy of the state. More generally, as social scientists help to develop an body of quasi-experimental methods that leverage the growing availability of sub-national data, it will become significantly easier, faster, and cheaper to evaluate the impacts of aid in fragile and conflict-related situations.

Caroline Bergeron was AidData's Partnerships Associate from 2014 to 2017

The project in Figure 1 was supported through a sub-award to William & Mary from the University of Maryland as part of a grant from the Air Force Office of Scientific Research (#FA9550-14-1-0353), funded by The Minerva Initiative of the U.S. Department of Defense. The research is the intellectual property of and reflects the views of the authors alone.