Ties That Bind: Chinese Public Diplomacy in East Asia and the Pacific

The S. Rajaratnam School of International Studies (RSIS) in Singapore, in partnership with AidData at the College of William & Mary, the China Power Project at CSIS, and the Asia Society Policy Institute (ASPI), co-hosted a conference on Chinese Public Diplomacy in East Asia and the Pacific at the Marina Mandarin Singapore on June 27. 2018. The conference presented the findings of a path-breaking study by AidData titled, Ties That Bind: Quantifying China’s public diplomacy and its “good neighbor” effect.

Four panel discussions and a lunch keynote, all featuring experts from around the world, dove deeper into the reach and influence of Chinese public diplomacy and the policy implications for countries across the Asia-Pacific.

Funding for this project was provided by the United States Department of State.

View recordings of the panels and keynote speakers at CSIS's website here.

June 26, 2018
Chinese public diplomacy in East Asia and the Pacific: Is it working?
A new report from AidData chronicles the nature and impact of China’s diplomatic programs. 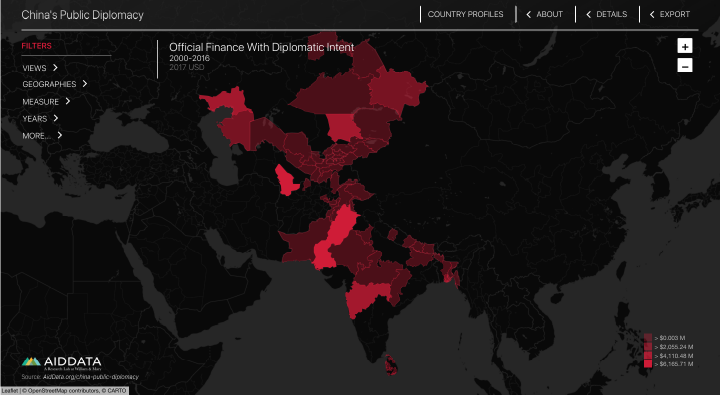