Does Development Aid Address Political Exclusion? A Disaggregated Study of the Location of Aid in Sub-Saharan Africa 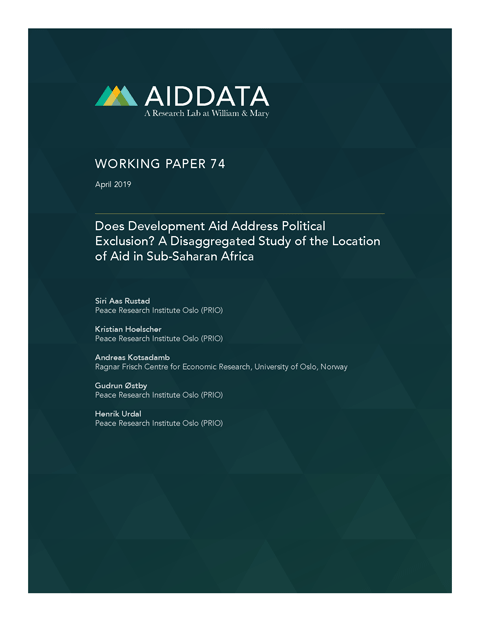 It has been demonstrated that development aid, while generally being directed towards poor countries, often fails to reach the poorest. In light of this, some donors are increasingly concerned with inequality and exclusion potentially undermining other sustainable developmental goals. Despite an increased focus on inclusive development, however, we know little about to what extent development aid reaches politically excluded groups and whether this varies across donors. This paper addresses these knowledge gaps, expecting that development aid is less likely overall to flow to areas where politically excluded populations live, but also that there will be variation among donors. Using a geographically disaggregated panel dataset covering African countries from 1995 to 2014, we combine sub-national data on the location of multilateral and bilateral aid projects and excluded ethnic groups. We find that World Bank aid is allocated less often to areas with excluded groups compared to both areas with included groups and mixed areas (i.e. areas populated by both excluded and included groups). No correlation exists between excluded groups and Chinese aid distribution, or a larger control group of ‘other donors’. When limiting the sample to donor countries with a particular focus historically and politically on inequality — the Nordic countries, Canada and the Netherlands — we find, however, that aid is disproportionally allocated to areas with excluded groups. These results suggest that the geographical allocation of development aid responds well to donor priorities. While the World Bank appears to be sensitive to the political agendas of the countries in which it operates, aid allocations made by the Nordics, Canada and the Netherlands seem to be reflective of the political agendas in their home countries.

Funding: Work on this study is supported by grants from the Research Council of Norway project, "Development Aid, Effectiveness, and Inequalities in Conflict-Affected Societies" (grant no. 250301).

This geocoded dataset includes all projects approved from 1995-2014 in the World Bank IBRD/IDA lending lines. It tracks more than $630 billion in commitments for 5,684 projects across 61,243 locations.