Grabbed trust? The impact of large-scale land acquisitions on social trust in Africa

The livelihoods of rural populations in Africa are closely tied to small-scale farming. In recent years, private investors as well as governments have shown a growing interest in large-scale acquisition of arable land across the continent. While researchers have started to analyze the local economic and environmental impacts of such investments, their socio-political as well as psychological consequences remain poorly understood. This paper investigates how changes in land ownership patterns caused by large-scale land acquisitions affect the level of interpersonal trust among rural communities. We maintain that the transition from community and individual-smallholder land ownership into large-scale investor property has a negative impact on local levels of trust. Furthermore, we assume that the deterioration of trust caused by large-scale land investments is stronger among women than men. To test our claims, we connect circa 71,000 respondents from Afrobarometer surveys to georeferenced information on the location of land deals from 33 African countries. Relying on a difference-in-differences type of empirical strategy as well as an instrumental variable approach, we show that large-scale land investments indeed disrupt local social fabrics by reducing interpersonal trust. Our results suggest that trust in relatives is particularly affected by large-scale land acquisitions. In addition, we find that land deals reduce personalized trust among women but not necessarily among men. 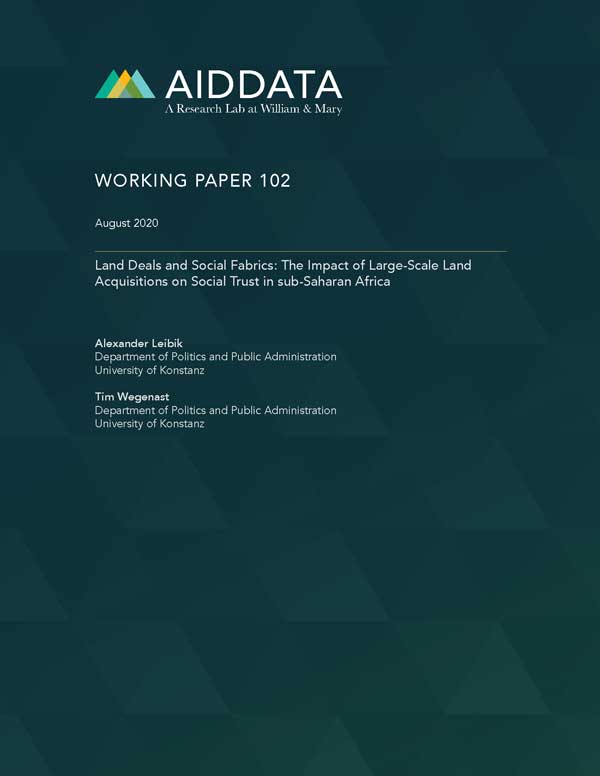