The dataset captures $161 billion in financial commitments between 2000 and 2014 and extends the geographical coverage of AidData’s existing database of Chinese development projects in Africa to parts of Asia and Latin America. 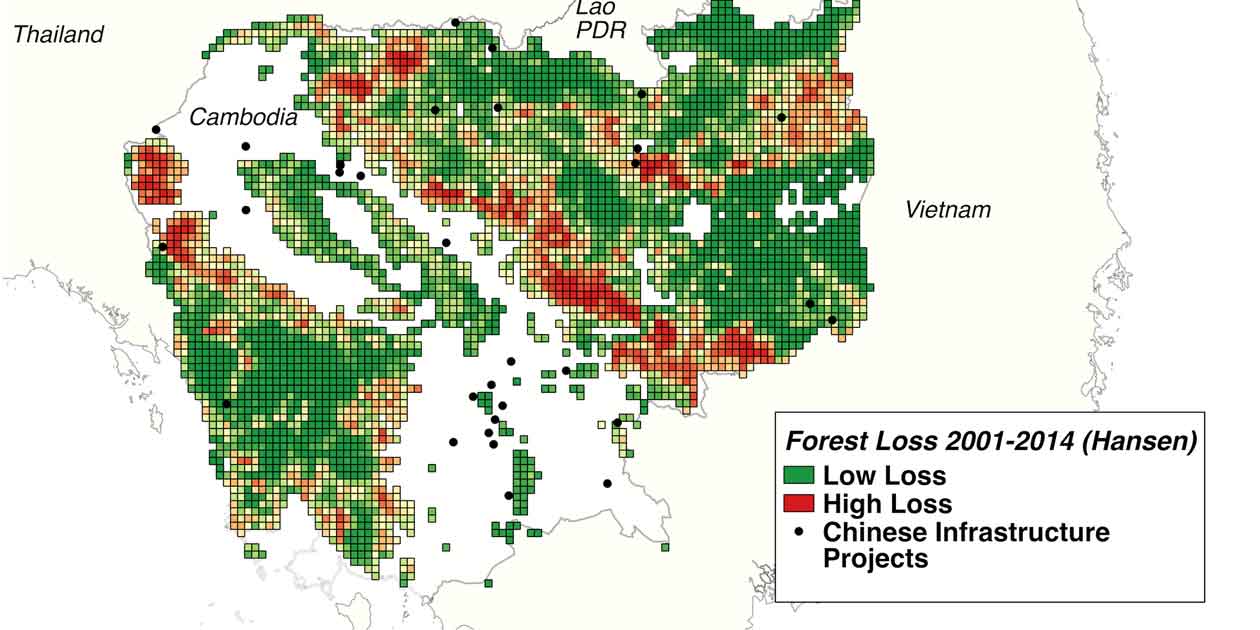 Conservationists and environmental advocacy groups have warned that the nature, pace and scale of Chinese-funded infrastructure projects in the developing world may lead to unintended environmental consequences, especially in so-called “ecological hotspots.” Until now, there has been no systematic, large-scale evidence that confronts the causal claim that Chinese-funded development projects have negative environmental impacts.

For the past 18 months, we have been working to answer the question: what are the land cover impacts of Chinese development finance activities in ecologically sensitive areas? AidData has teamed up with the MacArthur Foundation to evaluate the impact of Chinese-funded infrastructure projects on conservation outcomes in three ecological hotspots. In order to support the implementation of this geospatial impact evaluation (GIE), we used our “TUFF” methodology to generate and sub-nationally geocode data on 1,158 Chinese-funded projects in over 2,224 locations across 19 countries in the Tropical Andes, the Great Lakes region of Africa, and the Mekong Delta.

We are excited to announce that the complete dataset — TUFF China Ecological Hotspots, Level 1, Version 1.0 — is now available for download. It captures $161 billion in financial commitments between 2000 and 2014 and extends the geographical coverage of AidData’s existing database of Chinese development projects in Africa to parts of Asia and Latin America.

The publication of this dataset and a forthcoming GIE are precursors to another major milestone coming in 2017: the publication of a comprehensive dataset of Chinese development projects around the world from 2000 to 2014.

In order to estimate the forest cover impacts of Chinese-funded infrastructure projects on ecologically sensitive areas, we have fused our newly published dataset with 15 years of high-resolution satellite imagery on deforestation.

We have focused our impact evaluation efforts in Cambodia and Tanzania for several reasons:

These two countries shared a set of characteristics during our period of analysis (2000-2014) that made them similarly vulnerable to deforestation pressures, with similar GNI per capita and average rate of economic growth.These two countries had substantially different forest protection regimes in place during our period of study, which may help us gain insight into how forest protection regimes mediate the deforestation impacts of development projects.We were able to identify Chinese-funded projects with a high level of locational precision in these two countries, which in turn allowed us to construct a dataset of spatially referenced investment, outcome, and covariate data at the 5km square grid cell level.In these two countries there are sufficient numbers of geocoded investments that vary in the timing of their “rollout” to enable a GIE, which relies on variation in the exposure of forested areas to Chinese-funded projects over space (geographical distance) and time (as new project-funded interventions come into effect).

Our forthcoming GIE will draw upon the Hansen et al. (2013) dataset of forest cover and forest cover loss at the 30m spatial resolution to both (a) identify areas of standing forest in 2000 prior to Chinese-funded projects, and (b) measure forest loss in each subsequent year. To account for potential sources of forest loss other than Chinese-funded projects, we will also include in our analysis a battery of spatial covariate measures -- including precipitation, temperature, slope, elevation, population density, nighttime light (a proxy for subnational economic activity), travel time to urban centers (a proxy for market access), protected areas, plantations, and concessions.

The result will be a panel dataset with yearly outcome, treatment, and covariate measurements for 4,214 unique “forest cells” in Cambodia and 22,502 cells in Tanzania, which we will use to identify the impact of proximity to Chinese-funded infrastructure project locations on forest cover outcomes.

Our findings will be released soon, so stay tuned to learn more about this first-of-its-kind evaluation!

They are involved in several studies that evaluate the forest and biodiversity conservation impacts of international development projects, including projects funded by KfW and the World Bank.