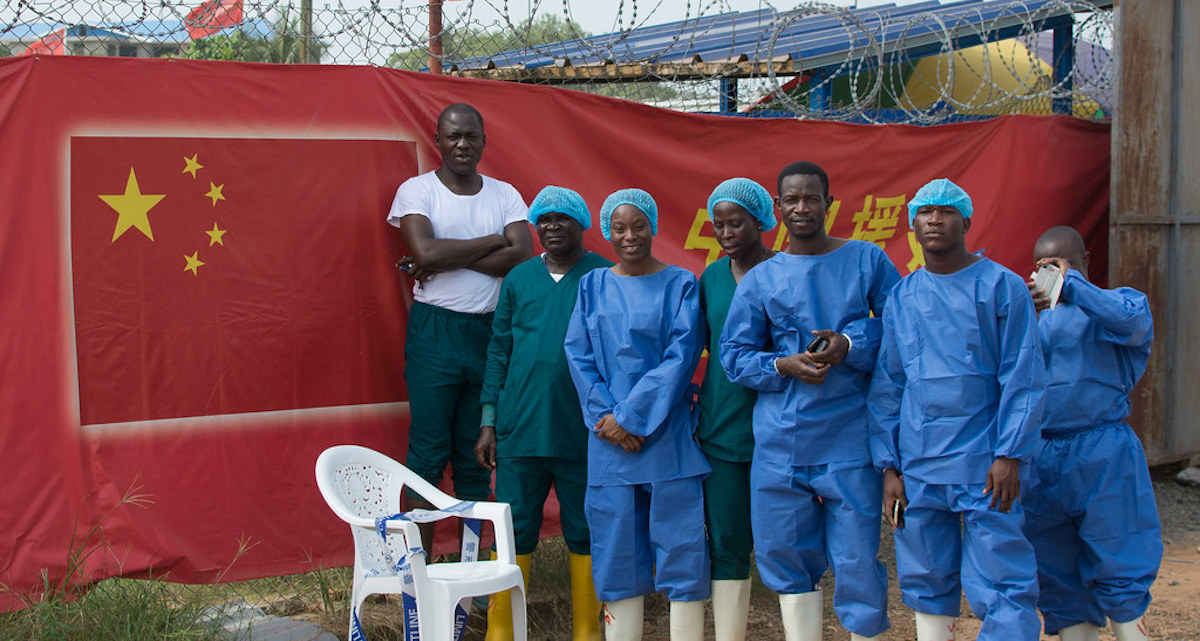 Ebola Response workers stand outside the Chinese Ebola treatment unit (ETU) in Monrovia, Liberia, during a ceremony as Liberia's last Ebola patient was released in March 2015. Photo by UNMEER via Flickr, licensed under (CC BY-ND 2.0).

AidData has received a $200,000 grant from the Ford Foundation to close the evidence gap on Chinese development finance for the global policy and research community. The support will enable AidData to extend and update its dataset of Chinese government-financed development projects, collect and analyze feedback data from the leaders of countries that manage grants and loans from Beijing, and continue building partnerships with policy and research organizations inside and outside of China.

As a result of the award, which will be monitored by the Foundation’s Beijing office, AidData researchers will examine how China’s Belt and Road Initiative (BRI) has shaped the volume, direction, and terms of its overseas development finance portfolio. This will provide a more comprehensive picture of the lending practices of China’s policy banks, state-owned commercial banks, state-owned enterprises (SOEs), and government agencies by publishing information on the terms and conditions of the loans.

“The Ford Foundation is leading the way in calling for China’s impact in the world to be responsible and sustainable. I think this project aligns well with the Foundation’s comprehensive efforts to better understand the impact of Chinese development finance on countries in the Global South,” said Samantha Custer, director of AidData’s Policy Analysis Unit. “We’re also delighted to be able to have the Foundation’s networks and convening power to assist us in facilitating constructive dialogue with Chinese academics, policymakers, and nonprofits working in our space.”

The award will also enable AidData to field and analyze the results of two elite surveys that provide feedback from leaders in 140 low- and middle-income countries who oversee Chinese development projects.

"With our new program strategy, the Foundation aims to improve the Environmental, Social and Governance (ESG) outcomes of China’s development finance in the communities of Global South countries by raising the social and environmental norms of Chinese outbound investment, by promoting communications between Chinese investors and local communities and CSOs, and by supporting knowledge-building in Global South countries," said Elizabeth Knup, Ford Foundation's China Regional Director.

"AidData's data, analysis and research has contributed enormously to the understanding of China’s development finance around the globe. We believe that this project will help AidData to provide increasingly current data and analysis to the researchers, CSOs and practitioners engaged with China’s development finance, including those in Global South countries, leading to greater transparency and understanding, and better policy responses."

Over the last two decades, China has transitioned from a net recipient to a net provider of development finance, and for many countries in the Global South it has become the financier of first resort.

Despite the fact that China’s overseas development spending now rivals or exceeds that of many other donors and lenders, its financial activities remain shrouded in secrecy. It does not participate in international reporting bodies such as the OECD’s Creditor Reporting System or the International Aid Transparency Initiative. Nor does it publish a country-by-country breakdown of its international grant-giving and lending activities.

“This project will help close the evidence gap for scholars and practitioners who want to better understand the social, economic, and environmental effects of China’s global development footprint,” said Brad Parks, AidData’s Executive Director. “We’re going to try to more effectively leverage survey data from citizens and leaders in the countries and regions where these projects take place.”

Since 2013, AidData has led an effort to shed light on official financial flows from China by developing a transparent, systematic and replicable methodology that enables the collection of detailed financial, operational, and locational information about Chinese government-financed projects. AidData’s Global Chinese Official Finance Dataset is the most comprehensive source of publicly available information about Chinese development projects around the globe. An overview on AidData’s China project can also be found here.

AidData’s policymaker surveys leverage a global sampling frame of over 100,000 leaders from 140 countries, which is updated annually. For this award, AidData will field short surveys of 12-15 questions focused on a single overarching topic and targeted to a subset of individuals from the global sampling frame over a four-week period of time.