The First Tranche
AidData's Blog
Filling the missing middle: A method for impact evaluators on a budget

Back to basics: A stronger case for bednets to fight malaria

A new study in PLOS ONE by a team including AidData, William & Mary researchers finds that a bednet campaign in the DRC led to a 41% decline in child mortality rates. 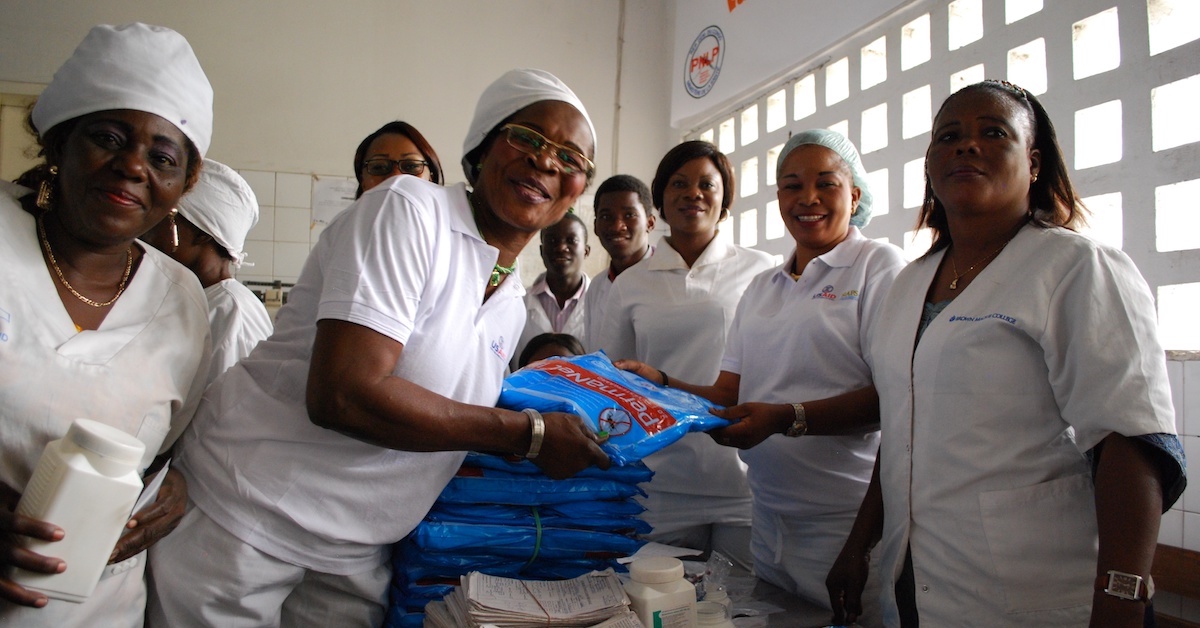 Staff at a prenatal clinic Kinshasa, in the DRC, show packages of insecticide-treated bed nets to be distributed to pregnant women. Photo by Kaukab Jhumra Smith/USAID via Flickr, licensed under (CC BY-NC 2.0).

Following a period of rapid growth, funding for malaria prevention and control has plateaued over the last decade. Despite remaining at a relatively high and stable level compared to 2000, this plateau in funding is a shame for two reasons.

First, the disease is far from dead, and it disproportionately kills children. After a decade of substantial progress, the numbers have stopped getting better, according to the WHO’s World Malaria Report 2018. Malaria cases have increased from 211 million in 2015 to 219 million in 2017; of the nearly half a million deaths attributed to malaria in 2017, 66% were children under five years old.

Second, new research is providing the kinds of relevant insights needed to increase the efficiency of scarce health funding to fight malaria. A study published in PLOS ONE today finds that a national bednet distribution campaign in the Democratic Republic of Congo (DRC) led to a 41% decline in mortality rates among children under five living in high-malaria areas. What’s more, the effect of the bednet campaign was found to be strongest among the poorest 20% of households.

"This study measures a lever that governments and aid donors can directly affect—access to a bednet program—rather than one that they can only indirectly influence, like ensuring household and individual use of bednets,” said Carrie Dolan, lead author of the study and assistant professor of Kinesiology and Health Sciences at William & Mary and a former research analyst for AidData.

Dolan and six other researchers from AidData, William & Mary, the University of California at San Diego, Wilfrid Laurier University, the World Bank, and Virginia Commonwealth University collaborated to conduct the geospatial impact evaluation of the national bednet campaign’s impacts on child mortality.

“We examined whether the attributes of a specific location—important factors like the malaria ecology index (MEI), or how malaria-burdened an area is—affected how well bednet programs worked to reduce child mortality. And what we see is that the bednet campaign reduced child mortality rates in a way that is statistically significant in areas with higher levels of malaria risk,” said Ariel BenYishay, a co-author on the study and AidData’s Director of Research and Evaluation.

Although there are many legitimate, competing priorities for increasingly scarce health aid, this study’s findings are particularly relevant given the dramatic but uneven progress since 2000 in the fight against malaria. High-risk malaria areas are now highly concentrated in a few countries like the DRC whose health systems are among the least well-funded. Maybe it’s time to reconsider the basics: governments and aid donors should support efforts to make sure that the poorest households in rural, high-malaria areas indeed have access to bednets.

As progress against malaria plateaus, where do we go next?

In many ways, the pre-2015 fight against malaria is a global success story.  In 2000, malaria grabbed headlines as the leading cause of death among children in sub-Saharan Africa. Governments and other donors responded, dramatically ramping up funding from USD $960 million in 2005 to $2.5 billion in 2014. The percentage of the population in at-risk sub-Saharan Africa who slept under insecticide-treated mosquito nets increased from 2% in 2000 to over 50% in 2015. Worldwide, the estimated number of malaria cases declined by 18%; malaria deaths fell by 48% overall and by 58% in children under five years old.

Fast forward to 2017 and look beneath the abstraction of global averages, however, and it is clear from the World Malaria Report 2018 that some countries are being left behind. Just five countries accounted for almost half of all malaria cases worldwide in 2017: Nigeria, the DRC, Mozambique, and Uganda. Of deaths among Congolese children in 2016, 40% were attributed to malaria.

Learning from past progress

The new study in PLOS ONE takes a closer look at one of these countries, the DRC, during a period of global progress against the disease. The researchers analyzed a series of mass distributions and replacements of bednets (referred to as Long-Lasting Insecticidal Nets, or LLINs) coordinated by the DRC’s National Malaria Control Program between 2009 and 2013. Since the timing of the program’s rollout varied across provinces, the researchers were able to compare child mortality rates in locations that were otherwise very similar—except for the presence of a bednet program.

Their study makes an important contribution to the evidence base on the effectiveness of large-scale campaigns against malaria, and differs from other consequential malaria-related research in three important ways.

First, this study evaluated how mere exposure to a bednet program affected mortality rates, not whether households actually used bednets. This is an important distinction, because the rollout of a public health campaign is an action a policymaker can directly affect—whereas ensuring use by specific households is not. This “intent to treat” principle also captures potential indirect impacts from the campaign. For example, bednet campaigns which did not reach 100% coverage in an area may still have contributed to a reduction in mosquitos, thereby also benefiting children who did not sleep under bednets.

Second, unlike clinical trials which can differ from real-world conditions, this study evaluated the impacts of a real, national-level campaign on child mortality in a country with high political instability, high pre-existing rates of child mortality, and a high burden of malaria—a challenging context for impact evaluation. And because a malaria infection can lead to death from other causes (such as dehydration or malnutrition), the researchers evaluated the effect of the bednet campaign on all-cause child mortality, a more relevant measure which captures malaria’s indirect contributions to child mortality beyond deaths directly attributable to the disease.

Finally, in contrast to cross-national studies, this study examined the precise locations within the DRC that were at the highest risk of malaria. As the PLOS ONE study notes, cross-national studies are often unable to compare areas with enough similarity, or to control for important variables such as the quality of governance, the strength of the health system, or the presence of other disease control programs. The PLOS ONE study controlled for these factors, as well as the presence of other aid spending, relative wealth, whether an area was defined as urban or rural, and other climate-related or environmental factors that might affect whether the risk of malaria transmission would be higher in a given location.

The high toll that malaria continues to exact on lives, communities, and countries makes it paramount to break the plateau in progress. Targeting bednets to areas with the greatest underlying risk for malaria may help increase the efficiency of limited anti-malaria resources. To regain momentum in the fight against malaria, governments and aid donors should consider how they can prioritize the mass distribution and replacement of bednets in high-risk rural locations, particularly to the poorest households.