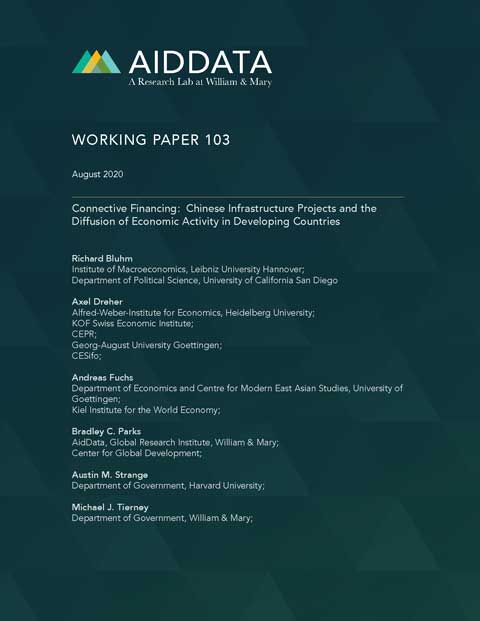 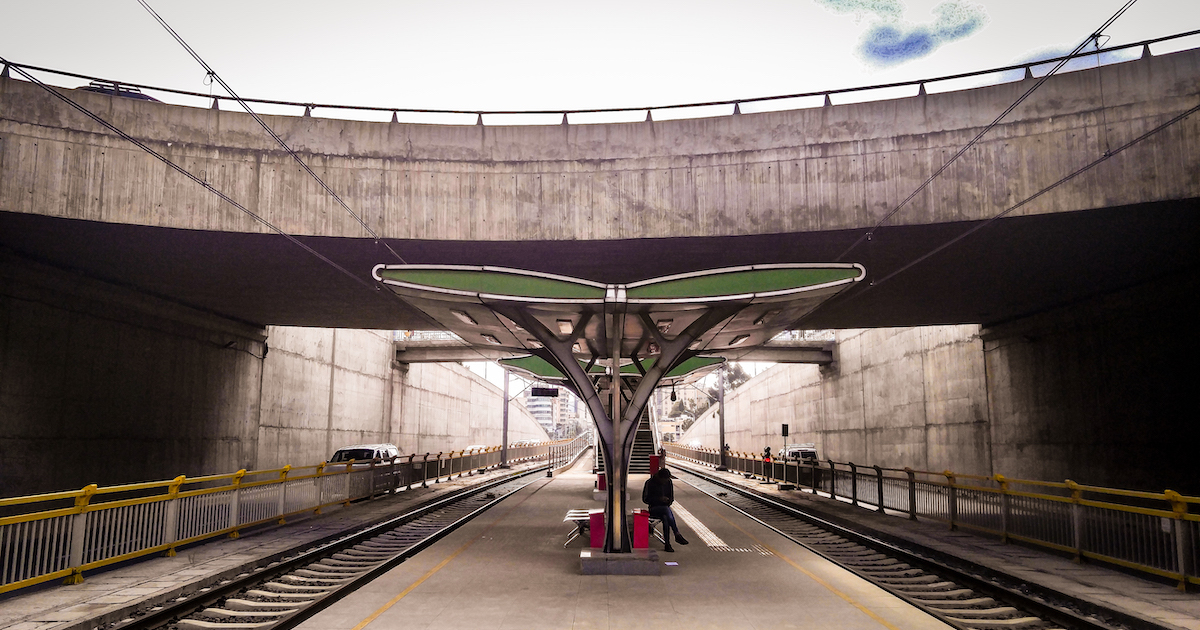 An AidData working paper published today substantially updates one of the most widely read papers in the series, Connective Financing: Chinese Infrastructure Projects and the Diffusion of Economic Activity in Developing Countries.

Originally published two years ago, the paper accompanied the launch of AidData’s geolocated dataset of Chinese official finance projects worldwide, and the publication page has been viewed more than 10,000 times. (A new version of this dataset, updated to cover new years but not geolocated, will launch later this year).

This new version hones in on the effects of Chinese-funded transportation and infrastructure projects in particular, finding that they reduce spatial inequality within (but not between) regions of developing countries. (Here, “regions” refers to both first- and second-order administrative regions, or provinces and districts). What’s more, the paper shows that these projects relocate economic activity from city centers to peripheries. The impacts are particularly strong for poorer regions that have more urban areas, lower travel times to cities, and are closer to the coast.

“In the first paper, we looked at all types of projects, all types of economic inequalities, (within region, between region), and many different patterns,” said Richard Bluhm, a coauthor of the paper and an assistant professor at Leibniz University Hannover and UC San Diego. “For this new research, we went back to square one. The data are the same, but almost all the research has changed to focus specifically on how Chinese physical infrastructure impacts urban economies. What happens to the development of a city when you implement Chinese infrastructure projects in heavily congested places where there is this very high unmet demand for transportation? And are these projects delivering on the promises of greater connectivity and economic equalization between cities and more rural areas?”

The researchers use data on the timing of China’s production of key goods of physical industry—aluminum, cement, glass, iron, steel, and timber—to demonstrate that China’s overproduction of these physical project inputs in excess of domestic demand translates into “shocks” of overseas investments down the line.

China strategically overproduces many of these commodities during economic slumps, resulting in large surpluses that are directed to projects abroad. And indeed, localities in developing countries that frequently receive Chinese infrastructure projects are found to be strongly impacted by annual fluctuations in the supply of physical inputs to projects. The researchers show that these places receive larger amounts of Chinese government financing in years of overproduction than other places, likely because existing capacity and relationships in these areas make it easier to implement additional projects.

In the original Connective Financing paper, a team of economists and political scientists from William & Mary, Leibniz University Hannover, Heidelberg University, University of Goettingen, and Harvard University leveraged AidData’s geolocated dataset of Chinese government-financed projects worldwide to evaluate how these investments writ large alter the geographic distribution of economic activity within provinces and districts in low- and middle-income countries.

The full dataset includes 3,485 projects that took place in 6,184 subnational locations across 138 countries from 2000 to 2014. For this new paper, the researchers narrow their focus to 269 Chinese government-financed transportation infrastructure projects undertaken in 1,211 subnational locations across 86 countries, worth an estimated US$64 billion. These “connective infrastructure” projects, such as roads, bridges, railways, and ports, are important engines of growth, brightening the landscape with economic activity while more closely connecting the features on it.

To consistently measure economic inequality year-to-year in more than 32,000 subnational localities around the world, the researchers use remotely sensed data—specifically, high-resolution satellite imagery of nighttime lights—to estimate economic output at the local level. The geographical dispersion of nighttime light within a locality tells an important story about how widely or narrowly the benefits of economic growth and development are being shared.

Using these yearly data on nighttime lights, the authors calculate a Gini coefficient to measure inequality on a scale from 0 to 1. A value of 1 represents complete economic inequality—for example, a province in which a single 1 km by 1 km area contains all economic activity in that province—while a value 0 represents complete economic equality, or a province in which every single 1 km by 1 km area has the same level of economic activity.

The results are promising: Chinese-financed infrastructure projects are found to create a more equal distribution of economic activity within the provinces and districts where they were located and accelerate the diffusion of economic activity around cities. Specifically, the Gini coefficient is reduced by about 3.4 percentage points in provinces and 3.6 percentage points in districts.

In particular, in line with the predictions of land use theory, transport projects are shown to shift activity from denser locations to their surroundings: economic activity moves from the highest quintile of the light distribution to lower quintiles. “What we see is that connectivity is being created and local growth really is taking place, albeit unevenly,” said Brad Parks, AidData’s executive director and a coauthor of the paper. “The impact of these infrastructure projects on the distribution of economic activity is very heterogeneous, with the biggest effects in Africa and poorer regions in developing countries, which tend to experience rapid population growth and have a large need for infrastructure.”

“These good things are happening but with a big “but”—we don’t see big shifts in the distribution of activity between regions, we don’t see connections happening between the urbanized areas and the rest of the country, the hinterlands,” says Bluhm. “So the picture is nuanced: these big infrastructure projects are not necessarily white elephants, but instead quite often are fulfilling a huge unmet demand for infrastructure, particularly from poorer regions, and reducing inequalities within these regions.”

“For future research, there are dozens more urban economics questions you could answer with this global dataset of Chinese government-financed projects, especially as you can see patterns with a level of generalizability that you can’t get from any other dataset,” noted Bluhm. “I, and I’m sure many other urban economists and political scientists, would love to get our hands on more detailed data on where exactly investments are taking place, where exactly Belt and Road Initiative projects are, to be able to more systematically answer how Chinese financed projects are changing cities.”