The First Tranche
AidData's Blog
New report on a global survey of leaders scores donors’ performance in an era of contested cooperation
Amidst calls to decolonize aid, what issues do developing-country leaders prioritize and what do they say they want from partners?
China rises sharply in influence among developing-country leaders, but does not yet surpass the US and G7 countries, according to new report 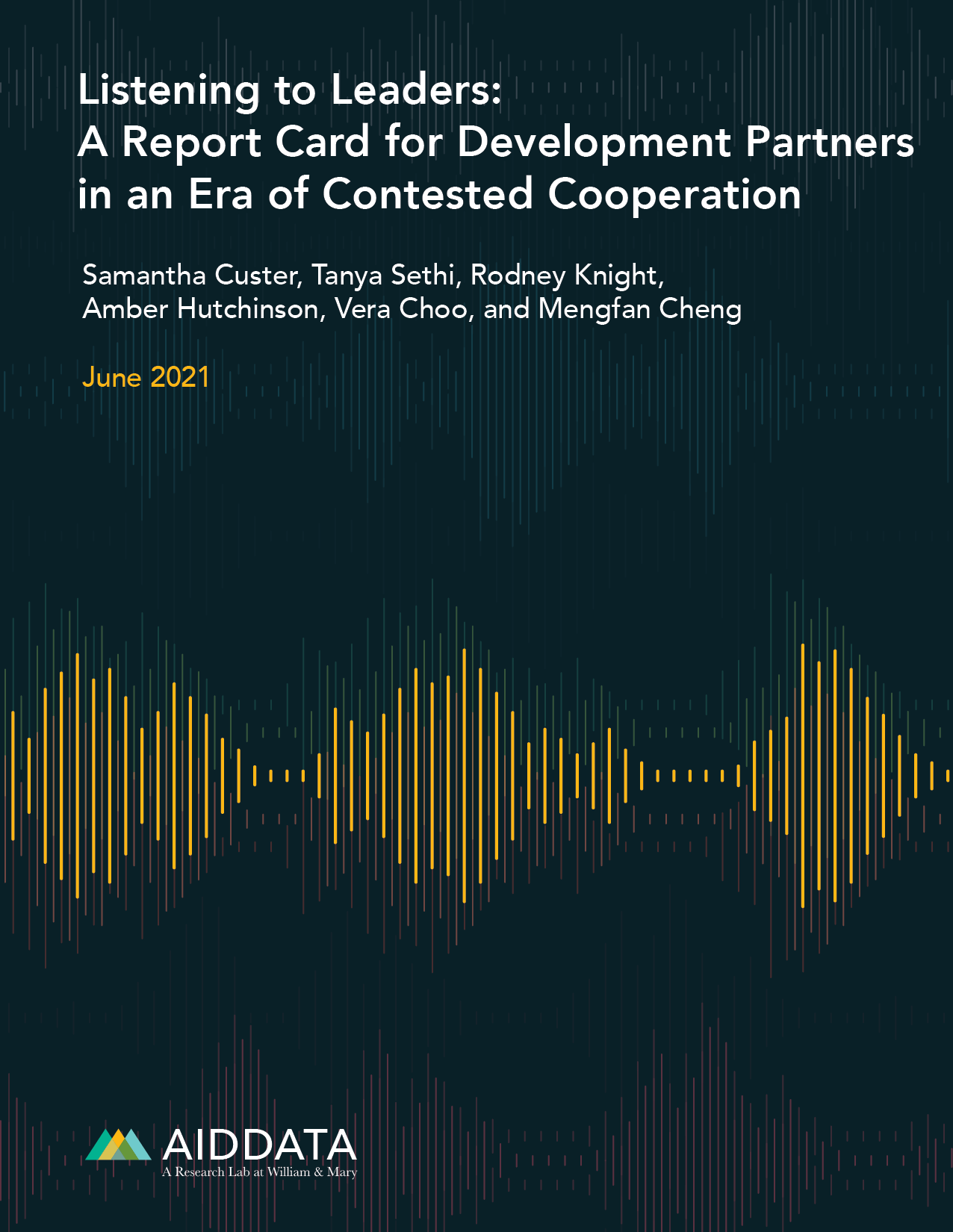 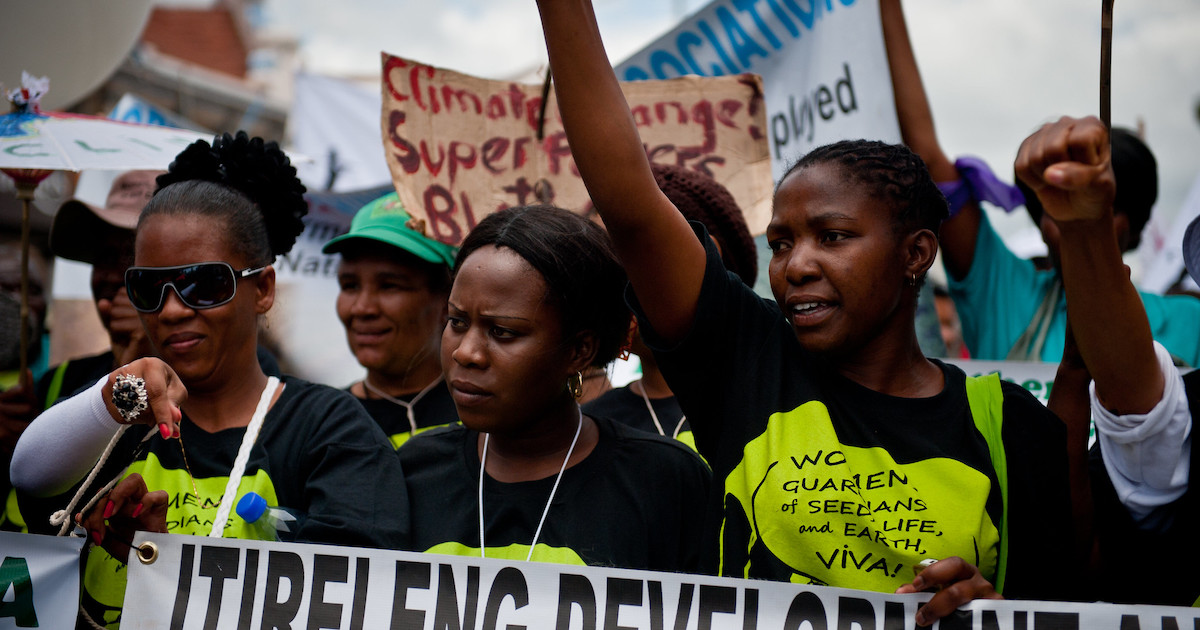 In the face of competing demands, developing country leaders don’t have much time for climate change or the environment. This finding comes from a new AidData report, Listening to Leaders 2021: A Report Card for Development Partners in an Era of Contested Cooperation.

As part of a 2020 survey of close to 7,000 leaders in 141 countries, respondents were asked to rank their policy priorities encapsulated by the Sustainable Development Goals (SDGs). The results? Climate action (SDG 13) ranked in the lower half for every stakeholder group surveyed. The story for the world’s oceans is even more dire: SDG 14, or life below water, which is the goal of conserving and sustainably using the oceans, seas, and marine resources, was the bottom priority for every stakeholder group.

Instead, over half of the leaders who responded selected education (SDG 4), jobs (SDG 8) and peace, justice and strong institutions (SDG 16) as their most important responsibilities, a finding consistent across respondent gender, occupation, region, and level of experience, and in keeping with findings from AidData’s 2017 survey.

June’s G7 meetings saw advanced economies agree to step up action on climate change, renewing a pledge to raise $100bn a year to help developing countries cut emissions. AidData’s 2020 Listening to Leaders Survey confirms what has been said elsewhere—the US is playing catch-up, as the environment was the only sector from which the country was excluded as a top 10 influencer in 2020. This may be symptomatic of the de-prioritization of climate and the environment by the joint US State Department and USAID strategy for fiscal years 2018-2021.

Meanwhile smaller donor nations, like Sweden and Norway, were among the top influencers in the environmental sector and prioritized funding for climate and oceans—a good example, the report notes, of spending allocations matching public rhetoric.

“G7 countries have been rightly chastised for not doing enough to combat climate change,” said Samantha Custer, Director of AidData’s Policy Analysis Unit and lead researcher on the survey. “But we see that environmental protection is sadly an afterthought for many leaders in the developing world too, where other priorities appear more urgent, or perhaps more achievable. We all acknowledge that leaders cannot prioritize everything simultaneously. But the question of climate is all the more important when one considers that keeping our planet habitable is the ultimate collective action challenge—and yet the results from our survey, as well as the policy choices and news reports we see from countries both wealthy and less well off, speak to a preference for collective inaction.”

One exception was leaders from two regions, South Asia and East Asia and the Pacific, for whom rising sea levels and extreme weather events represent imminent threats to their countries’ livelihoods. Respondents there placed greater emphasis on climate change (SDG 13) than eradicating poverty (SDG 1). But overall, environmental goals—life on land (SDG 15), life below water (SDG 14), and responsible consumption and production (SDG 12)—continued to be an afterthought for low- and middle-income country leaders.

AidData separately analyzed leaders' priorities compared to those of citizens. (Citizen priorities were derived from the United Nations MY World Survey for 2018-2019, where people worldwide voted on their six most important development issues). AidData found general publics more concerned about climate change than their leaders, perhaps indicating that they may already be seeing early symptoms of how a degrading climate may impact their lives and livelihoods. But, here again, other environmental goals, like responsible consumption and production (SDG 12) and life below water (SDG 14), failed to penetrate the top priorities for anyone—be it leaders, citizens, or donors.

The report authors do have a caution, however: when given options to select between aid programs of different attributes, developing country leaders voluntarily showed a preference for those with environmental regulations to minimize environmental damage, than those without. “Just because environmental issues were not foremost on the list of the most pressing development problems leaders said they wanted to solve, this should not be taken as an indication that they are unsympathetic to the importance of safeguarding the Earth’s biodiversity,” said Rodney Knight, Deputy Director of Policy Analysis at AidData. “The survey results show that leaders prefer projects that do not actively harm the environment, even if they may feel the need to prioritize their attention and resources to other concerns.”

For more, read the full report, Listening to Leaders 2021: A Report Card for Development Partners in an Era of Contested Cooperation.