The survey goes out to 100,000 in-country leaders, gauging attitudes on priorities, reforms, and partnerships. 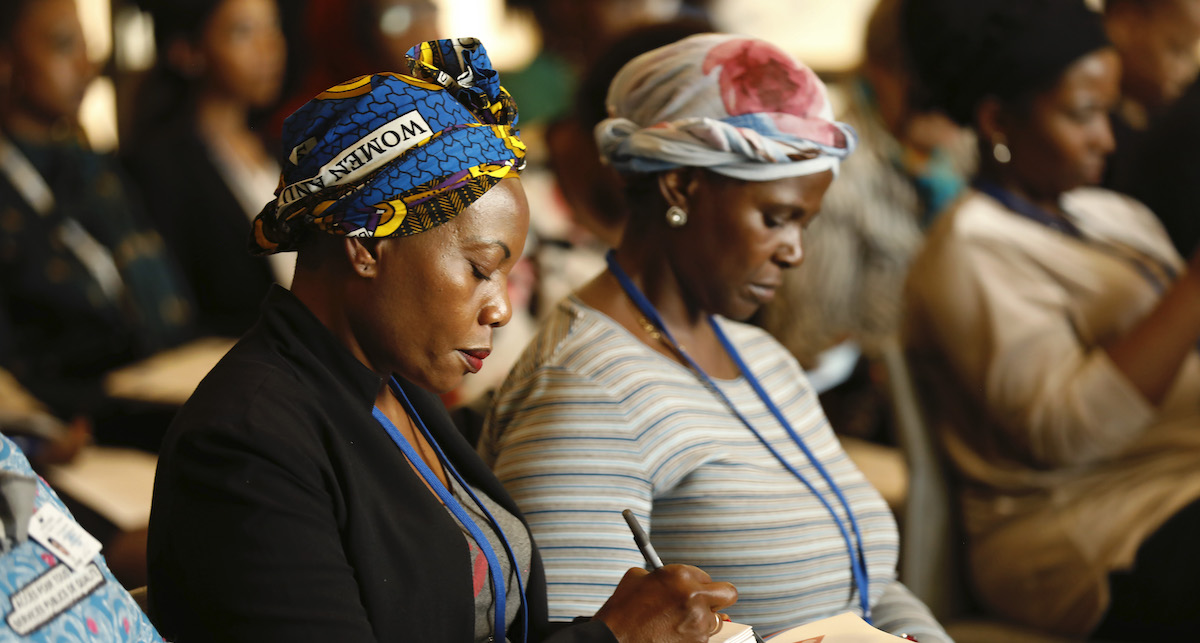 Attendees take notes at the 63rd UN Commission on the Status of Women. Photo by UN Women/Ryan Brown via Flickr, licensed under (CC BY-NC-ND 2.0).

This June, AidData’s Listening to Leaders team will field an online survey to around 100,000 policymakers in 141 developing countries.

Leaders will weigh in with their views on the most important development priorities for their country, constraints and opportunities in achieving those priorities, and the role and performance of donors (external development partners) in making progress against goals. The Listening to Leaders Survey is one of only a few to canvass these leaders on a global scale.

It will be the third wave of a survey that typically makes news: 2018 findings were reported on by NPR, The South China Morning Post, The Washington Post, and Mother Jones, and sparked conversation among development partners like Canada, UNESCO, UNICEF, and the UNDP.

“The Listening to Leaders Survey is a rare opportunity to hear directly from leaders in developing countries about their efforts to drive forward reforms and work effectively with development partners,” says Samantha Custer, AidData’s Director of Policy Analysis. “AidData’s role is to serve as an honest broker—we are not a funder of governments or development programs, so policymakers can speak more candidly about what’s working, what’s not, and why.”

Aid donors often conduct or fund evaluations of specific projects or activities, which they use largely for internal purposes. The AidData model is unique, providing an accessible report card on donors from the recipient country leader perspective, and by assessing the totality of the donor’s activities, not the performance of a single program.

“The results of this survey can help development partners in terms of strategy, planning, resource allocation, and assessing influence,” says Custer. “For policymakers in developing countries, the survey is a useful tool to understand how their priorities and concerns compare with or are shared by those in similar leadership positions in other countries.”

The survey will field until early this August. AidData will make the top-line survey results and responses (at an aggregate level to respect respondent anonymity) publicly available. The first analytical report will be published in late 2020 to early 2021.

“There are three broad topics, two of which—Development Priorities and Donor Performance—are carried over from the 2014 and 2017 waves of the survey, which give us the opportunity for some valuable trend analysis,” says Mengfan Cheng, Program Manager for the Listening to Leaders program. “The new module on Policy Environment will allow us to dig deeper to better understand the roadblocks to building a favorable enabling policy environment within developing countries, and what role international actors are best positioned to play in helping build such an environment.”

The survey is timely, with the development landscape rapidly evolving. Decision-makers must cope with sometimes fresh challenges and opportunities. While some countries remain aid dependent, others are seeing development finance play a smaller role in their overall resources. Elsewhere, countries are becoming wealthier: from 2018 to 2019, six countries graduated to a higher income-level group, according to the World Bank. (Only one fell). A similar number graduated the year before.

But all is not rosy: According to the IMF, the median public debt of low-income countries rose to 47% of GDP in 2017, up from 33% in 2013. Many face the prospect of ‘debt distress’, or are already encumbered with insupportable debt. As the Overseas Development Institute recently observed, developing countries are borrowing more from private commercial creditors, who charge higher interest rates, than public institutions and traditional lenders like the World Bank.

Meanwhile, aid flows from OECD countries are largely stagnant. Development partners—new, emerging and established—are in some cases re-visiting their strategies, to see where they can have the greatest bang for the buck and where these strategies fit in a more crowded, and in some cases a more competitive, marketplace.

The Listening to Leaders Survey is unusual in starting with a systematically-assembled global sampling frame, the design for which begins by conceptualizing common functions that virtually all governments perform. Though they may have slightly different names from country to country, these include more than 30 institution types, such as a Ministry of Finance, a Supreme Audit Institution, and a National Statistical Office.

The Listening to Leaders team next creates inclusion criteria for each organization—the positions or job titles that are of interest, and that would be translatable from one country to the next. For a Ministry of Finance, this might include the Minister, Deputy Minister, Chief of Staff, Chief Economist and others. Project managers and a team of research assistants then conduct desk research to discover the names of individuals who occupied those positions during the timeframe of interest (2016 to 2020). Using publicly available resources, they identified the contact information of around 100,000 potential survey participants who fit this criteria.

More details on how AidData built the sampling frame and survey will be available as an appendix in the analytical report released later this year. For this third wave of Listening to Leaders, AidData is fortunate to be able to leverage the investments made in developing the sampling frame for the two earlier waves. This frame is continually updated by AidData staff and research assistants.