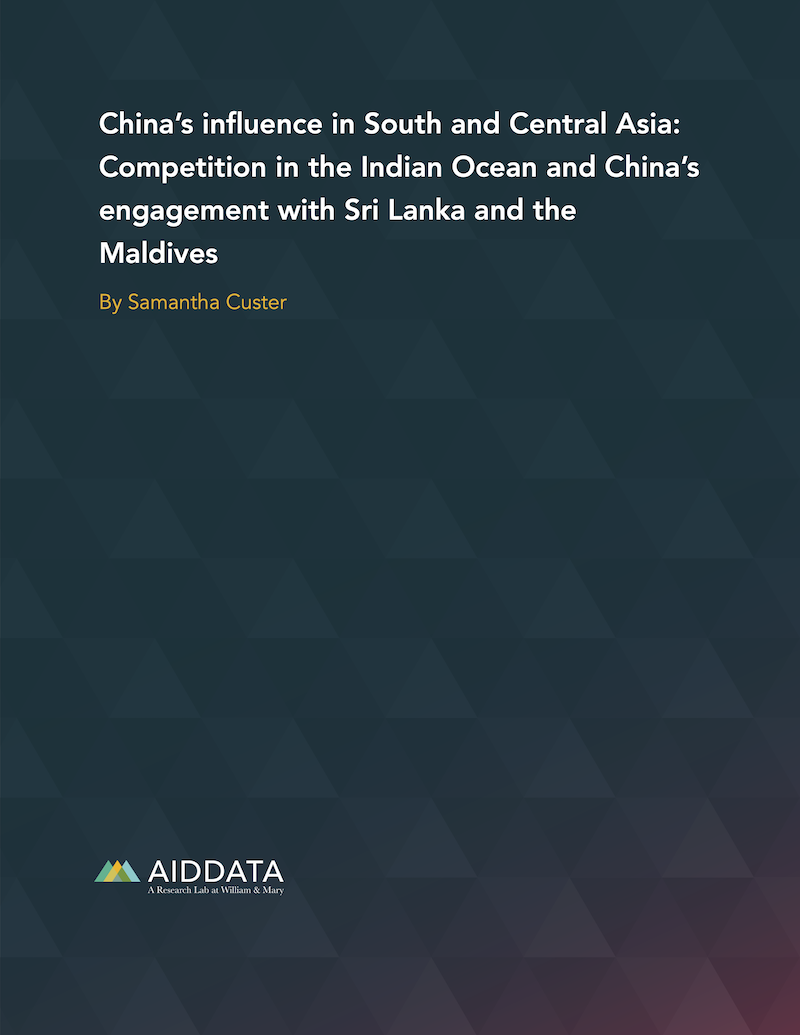 Competing visions for the Indian Ocean: China’s influence in South and Central Asia

China has positioned itself as an indispensable partner for the Maldives and Sri Lanka, adapting economic tools to advance multiple objectives. What are the implications? 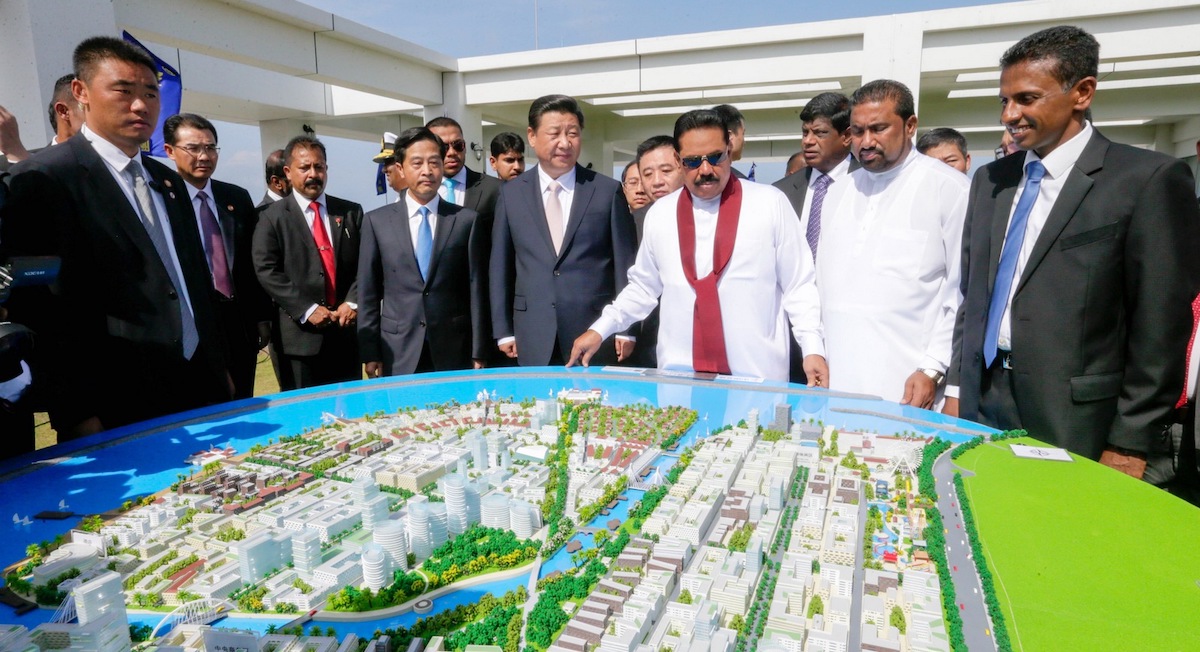 Editor’s Note: This blog is adapted from testimony given by Samantha Custer, AidData’s Director of Policy Analysis, before the US-China Economic and Security Review Commission for a hearing (livestreamed and recorded) on “China’s Influence in South and Central Asia” on May 12, 2022. The full policy brief is available online.

Economic opportunity is routinely cited as an explanation for what attracts countries to engage with China. Political leaders see infrastructure as the gateway to economic growth for their countries and increasingly view China as a lender of first resort. But these economic ties can also constrict autonomy of action for smaller countries like Sri Lanka and the Maldives, creating obligations to back Beijing’s preferred policies, avoid criticism of its actions, and grant political or security concessions.

Over the last decade, Beijing has positioned itself as an economic partner to Sri Lanka and the Maldives and has translated economic tools into leverage to advance its national interests in the Indian Ocean. China’s engagements with both countries have affected their relations with other partners, including the US; I therefore propose five recommendations for the US to consider moving forward.

How has Beijing positioned itself as an indispensable economic partner?

Over the last two decades, Beijing has bankrolled 235 development projects worth $15.7 billion in Sri Lanka and the Maldives. But Beijing is a “banker, rather than a benefactor.” It supplies much of its economic assistance in the form of loans and export credits, rather than grants. Debt financing has allowed Beijing to generate interest payment revenues and position Chinese firms as go-to exporters of goods and services.

Beijing has accumulated $3.2 trillion in foreign exchange reserves. But its state-led industrial policies have created an oversupply in its construction, steel, and engineering industries. China is highly motivated to put the excess financing of its state-owned banks and implementation capacity of its state-owned firms to productive use abroad.

The scale of its assistance gives Beijing leverage to influence smaller countries to back its policies, avoid criticizing its actions, and grant concessions. China needs Sri Lanka and the Maldives to help secure its maritime trade and project power in the Indian Ocean. The two countries may be small, but they have voting power in the United Nations to help insulate Beijing from censure for its human rights practices and assertive territorial claims.

Of course, Sri Lanka and the Maldives have their own motives to partner with China—economic opportunity, chief among them. China bankrolls infrastructure projects at a scale unmatched by traditional development partners and is critical to their tourism-dependent economies. Geopolitical considerations are a secondary concern: political leaders view Beijing as a useful counterbalance to blunt the influence of India, the US, and its allies in their domestic politics.

Beijing provided timely assistance at critical junctures—a civil war in Sri Lanka and a tsunami in the Maldives—which generated goodwill and stoked demand for Chinese development projects. China was also opportunistic to befriend leaders isolated by international criticism and bankroll their priorities.

But then public enthusiasm waned and political opposition intensified over unprofitable airports, empty stadiums, expensive roads, and mounting public debts. New presidents rose to power with pledges to root out corruption, reduce debt, and temper the pivot to Beijing. They placed projects on hold, scrutinized agreements, and renegotiated their debts on more favorable terms.

Ultimately, most Chinese projects were restarted and the public blamed local politicians, rather than Beijing, for white elephant projects and runaway debts. And both Sri Lanka and the Maldives signed new agreements with China at a smaller scale. Beijing also positioned itself as an emergency lender, signing balance-of-payments agreements to prop up reserves and boost liquidity so Colombo could secure new debt to repay old debts.

Beijing has achieved some economic gains, but these have been difficult to sustain. A 2017 Maldives-China Free Trade Agreement was steamrolled through parliament but has yet to be ratified. Sri Lanka declined IMF assistance in 2020 and rejected a $480 million MCC grant. But it began negotiations with the IMF after its debt default last month. Both countries used elections to renegotiate the terms of assistance. And leaders have been willing to say no to Beijing—canceling projects or seeking alternative funding—when other motivated partners were waiting in the wings.

Beijing has won some foreign policy concessions. Neither country recognizes Taiwan. Both are reluctant to condemn Beijing’s human rights practices or maritime aggressions. Sri Lanka voted with China in the UN 99% of the time for nearly a decade. But it is less certain that China will achieve its security aims. Sri Lanka’s willingness to grant China a 99-year lease to operate Hambantota port was more likely about Colombo’s interest in easing its broader debt situation. And the Maldives rejected China’s proposal to establish a Joint Ocean Observation Station.

How have Beijing’s economic overtures in the region affected relations with other partners?

Beijing’s ability to convert economic leverage into concessions ultimately comes down to how countries assess the viability of alternative partners. India is geographically proximate but domestic politics have splintered along pro-China versus pro-India lines. If we include both grants and loans of varying concessionality, Beijing outspends the US by 2-to-1.

But there are drawbacks to China’s assistance. Beijing supplies financing on less generous terms and requires implementation by Chinese firms and labor. The features that make Chinese projects attractive to local politicians—sourcing ideas from leaders, expedited approval, and opaque procurement processes—heighten the risk of politically expedient but less financially sound projects. They also create opportunities for local officials to collude with Chinese firms to prop up costs and pocket the illicit proceeds. These risks can compound the distress of borrowers if projects don’t generate sufficient revenues to repay the high costs of financing.

What recommendations should the US-China Economic and Security Review Commission consider for Congressional action?

Beijing’s influence is strongest in cases where countries lack negotiation leverage and political leaders succumb to pressure to take short-term actions that may not be in their national interests. To mitigate this risk, I propose five recommendations for the Commission to consider: