We break down China’s influence toolkit in South and Central Asia, as profiled in AidData’s interactive dashboard and a report newly available in Russian. 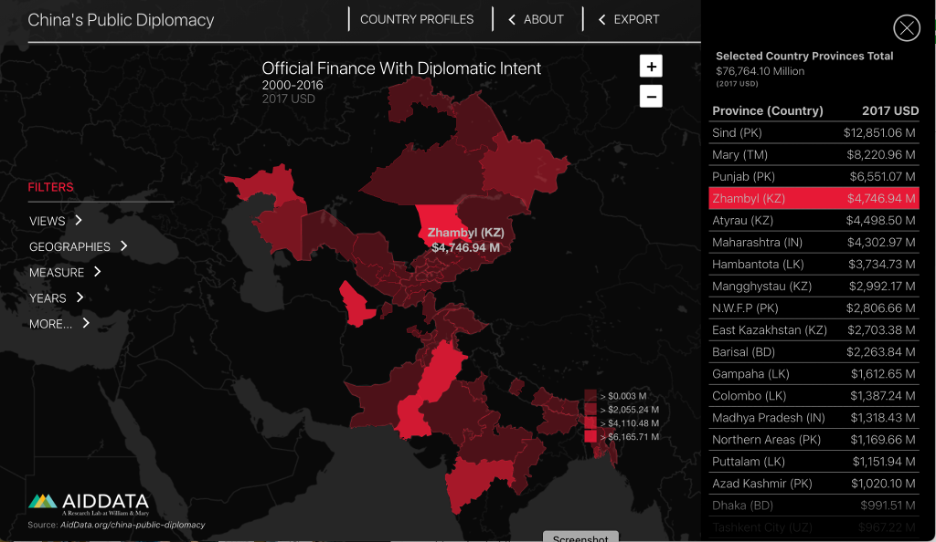 In July 2021, China made headlines by joining forces with five South Asian countries to launch a COVID-19 vaccination and poverty alleviation cooperation platform. Noticeably missing at the negotiating table was Beijing’s proximate rival for regional influence—India. That same month, Chinese leaders visited several Central Asia countries amidst an escalating conflict in Afghanistan and sought to position China as a key player and ally in regulating the conflict in what traditionally has been Russia’s backyard. Despite featuring different tools and geographies, both episodes illustrate Beijing’s healthy appetite to win over foreign leaders and publics in what China considers its “greater periphery.”

This bid to exert influence is not new; Chinese leaders have long viewed the 13 countries of South and Central Asia (SCA) as a geostrategic priority and a fulcrum of power. In fact, over the past two decades, China has sought to manage negative reactions to its growing military and economic might, while building a coalition of countries willing to back its preferred policy positions in international fora. A new AidData report indicates this strategy may be returning dividends: China was ranked 8th in overall influence, 7th in Europe and Central Asia, and 3rd in South Asia, in a global survey of nearly 7000 leaders.

This raises some critical questions. Which tools does Beijing employ to win over foreign leaders and publics? How are countries responding to these overtures? And what are the implications for rival powers such as India, Russia, and the United States who seek to compete with or counter China’s influence?

The dashboard has now been updated to include data for 39 countries in Central Asia, South Asia, East Asia, and the Pacific covering the years 2000-2017. For the first time, users will be able to visualize China’s financial diplomacy—arguably its most visible and controversial public diplomacy tool—at the province and district level for countries in South Asia and Central Asia. Also newly available are country profiles: top-level summaries of all of China’s public diplomacy activities in a given country. Additional subnational public diplomacy indicators will be incorporated into the dashboard later this year.

Historically, we’ve tended to examine public diplomacy activities through the lens of state-to-state relationships: how much attention is one country paying to another at the national level? But this can be limiting, as it obscures the full reach of a foreign power’s influence within another country. Is Beijing’s influence limited to just the capital city? Are some communities of greater strategic interest than others, due to natural resource endowments, connections to political leaders, proximity to borders or disputed regions, etc.?

By taking a subnational approach, we can better understand whether China is differentially engaging in public diplomacy at the province or district level in countries in South and Central Asia. Importantly, this also opens up the opportunity to examine how perceptions of China’s overtures at a local level compare to those at the national level.

What exactly goes into “public diplomacy”?

States interact with each other in an incredible diversity of ways. Public diplomacy—the collection of government-sponsored activities aimed at influencing the perceptions, preferences, and actions of foreign publics and leaders—can be thought of as one subset of tools in a country’s “foreign policy toolkit.” This includes efforts to export culture and language, foster people-to-people ties, cultivate relationships with other leaders, shape media narratives, and employ the power of their purse to win friends and influence people.

In the SCA region specifically, AidData’s research finds that financial diplomacy—a subset of government-directed overseas aid and debt instruments aimed towards advancing diplomatic objectives—constitutes the vast majority of China’s public diplomacy efforts (worth $126 billion from 2000 to 2017).

Financial diplomacy emphasizes what is most visible to foreign publics and leaders: money, in the form of grants and concessional and non-concessional loans. In the report and dashboard, we break this down into four key categories: infrastructure financing, budget support, debt relief, and humanitarian aid. (Note: these four categories are not exhaustive, as AidData tracks China’s investments in other areas, but they are most relevant to the lens of public diplomacy and influence).

Infrastructure financing, which includes the improvement and upgrade of existing infrastructure as well as new projects, is particularly visible to citizens, especially when publicized by advertising campaigns that position this assistance as a gift from the Chinese people to the people of the recipient country. These include the expected projects, like China friendship bridges, roads, railways, and power plants, but also encompass new and ambitious digital connectivity and telecommunications projects.

The second form of financial diplomacy Beijing regularly deploys is budget support. The most flexible form of funding that one country can give to another, budget support is both highly visible and highly desirable to leaders. Rather than being projectized, these funds are untied, giving leaders enormous flexibility in how they are spent.

A third facet is debt relief, which is visible both to leaders and citizens. Either outright debt forgiveness or a reorganization of existing debts helps countries pay down existing obligations that they previously took onboard. (As many as 1 in 4 dollars that China previously extended via overseas lending has come under renegotiation, according to a report from the Rhodium Group.)

Finally, China provides humanitarian assistance in the form of financial, technical assistance, or in-kind goods (such as a relief ship with supplies), in the context of natural disaster.

To gauge the scope and effects of these activities, it’s both important and necessary to go beyond thinking about individual outputs and activities to also look at the inputs and the larger picture. Why does China invest in certain projects or activities? What does it hope to gain? Understanding China’s foreign policy toolkit requires taking a strategic, portfolio-level view: Beijing’s overtures are rarely happening in isolation, but are often synergistic and in tandem with the use of other tools of public diplomacy.

To further explore how China is deploying these forms of financial diplomacy across the South and Central Asia region, as well as subnationally within countries, you can visit AidData’s interactive dashboard. Data on cultural, exchange, informational, and elite-to-elite diplomacy is also available at the country level for nearly 40 countries.

Austin Baehr is a Senior Program Manager at AidData.