The First Tranche
AidData's Blog
Filling the missing middle: A method for impact evaluators on a budget
Chinese-funded infrastructure in endangered forests: What is the data telling us?

New research evaluating World Bank development projects, including those that pose the most environmental risks, finds no harm to important bird habitats. 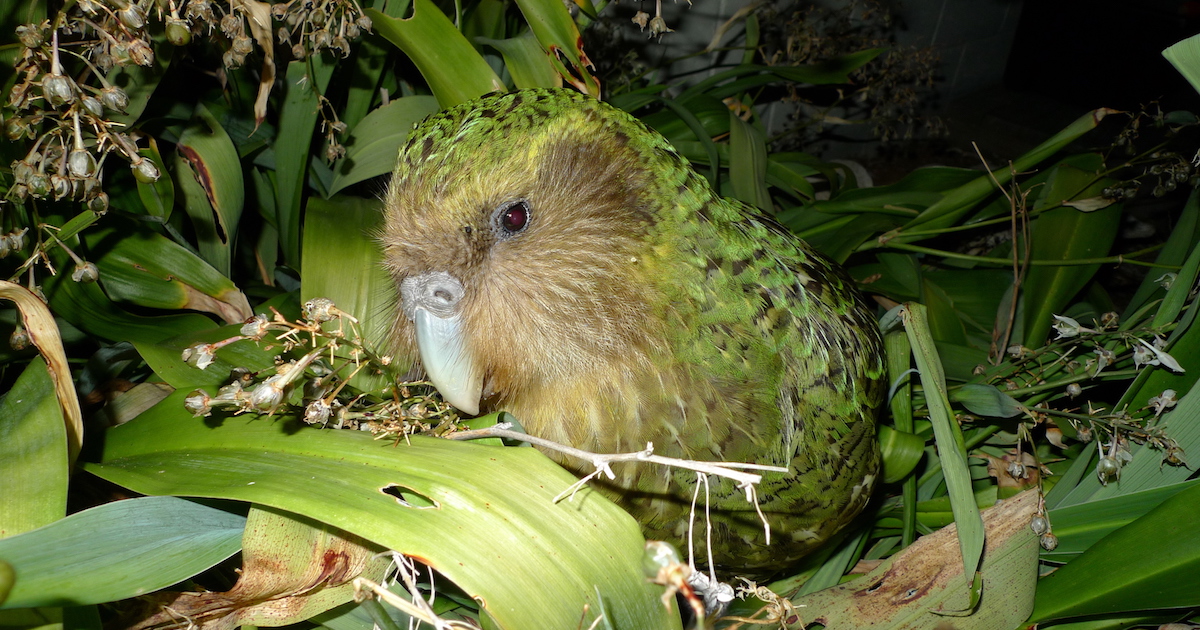 Sirocco the kākāpō among renga lilies on Maud Island, New Zealand. Photo by Chris Birmingham for New Zealand Department of Conservation via Flickr, licensed under (CC-BY-2.0).

If the world’s only flightless parrot could read, it might hop for joy at the results of a recent study finding no negative effects overall—and even some positive impacts—from World Bank development projects on the health of forest habitats for its fellow critically endangered bird species.

The bird in question, the kākāpō, is a nocturnal, ground-dwelling parrot native to New Zealand’s rainforests. It is both the world’s heaviest parrot and quite possibly the world’s longest-lived bird. It is also rapidly going extinct: the direct result of heavy habitat loss driven by human activity.

Less than 160 known kākāpō now remain in the wild. The most famous—Sirocco, a 21-year-old male—has more than 200,000 followers on Facebook and Twitter, thanks to a viral clip from the BBC series Last Chance to See in which he was filmed enthusiastically attempting to mate with zoologist Mark Carwardine’s head (prompting the series’ presenter Stephen Fry to comment, “Sorry, but this is one of the funniest things I’ve ever seen. You are being shagged by a rare parrot!”). With more than 7 million views on YouTube, the encounter was an instant hit, massively increasing public interest in the kākāpō’s plight and leading to Sirocco’s appointment by the Government of New Zealand as the country’s Official Spokesbird for Conservation.

As powerful as public support can be for helping conserve endangered species, even more impactful than entertaining TV clips and social media posts are concrete efforts now underway to protect the native forests of rare birds like the kākāpō from further habitat loss.

Conservation schemes like BirdLife International’s Important Bird and Biodiversity Areas (IBAs)—which use an internationally agreed upon set of criteria to identify areas as globally important for bird populations and set them aside for conservation—help safeguard the habitats of hundreds of bird species that are vulnerable enough to be placed on the IUCN Red List of Threatened Species.

But conservation areas are not islands unto themselves; the outside world frequently intrudes. What happens to the forest health and biodiversity of these IBAs when human development activities—like a new road, bridge, or hospital funded by an aid agency—are sited nearby?

For decades, development agencies like the World Bank have designed and implemented projects with environmental safeguards meant to reduce the risk of damaging nearby forests and habitats even as they seek to improve human lives. A popular and persistent criticism of these environmental safeguards is that they fail to produce tangible conservation benefits and constitute nothing more than the “greenwash” of harmful projects to satisfy external stakeholders. The World Bank and other development agencies have pushed back on this claim, insisting that they are taking proactive measures to protect the environment—for example, by creating nature reserves and strict protection zones alongside infrastructure corridors.

Yet, rigorous empirical evidence on the impacts of development projects near sites of high biodiversity importance has been lacking. How do the costs and benefits really balance out?

Something to crow about

In a first-of-its-kind study published in the Journal of Environment and Development, a team of researchers from AidData at William & Mary, the University of Texas-Austin, the Royal Society for the Protection of Birds, and BirdLife International analyze how measures of forest cover loss and biodiversity conservation in hundreds of Important Bird and Biodiversity Areas (IBAs) changed over time in response to nearby World Bank development projects.

In a bit of good news, they find that, on average, World Bank development projects do not have measurably negative impacts on biodiversity conservation or forest cover in nearby IBAs. In fact, a subset of World Bank projects—so-called “Category B” projects, identified as posing environmental risks that can be readily mitigated during implementation—are even associated with a reduction in the rate of forest loss in nearby IBAs.

To conduct their analysis, the researchers drew upon a publicly available dataset assembled by AidData of the subnational locations of all World Bank projects approved between 2000 and 2011. They combined this information with high-resolution satellite data on forest cover loss over time, and on-the-ground measures of biodiversity in IBAs collected by BirdLife International.

Tracing the roots of success

The World Bank’s environmental safeguards appear to be working as designed, reducing stress on biodiversity and slowing deforestation. However, this study only investigated a relatively short period of performance (about 12 years); it’s not yet clear whether the benefits associated with World Bank projects will persist over time.

But that would really give rare birds something to crow about.