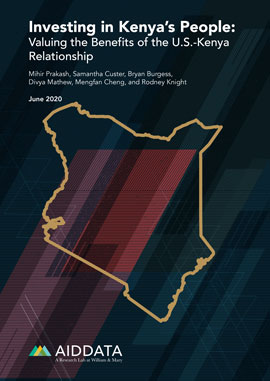 Policy Report
Investing in Kenya's People: Valuing the Benefits of the U.S.-Kenya Relationship
No items found.

U.S. contributions to Kenya estimated at over $3 billion annually, according to new AidData research

The report is the first to provide a whole-of-society view of U.S. contributions to Kenya’s economy and development. 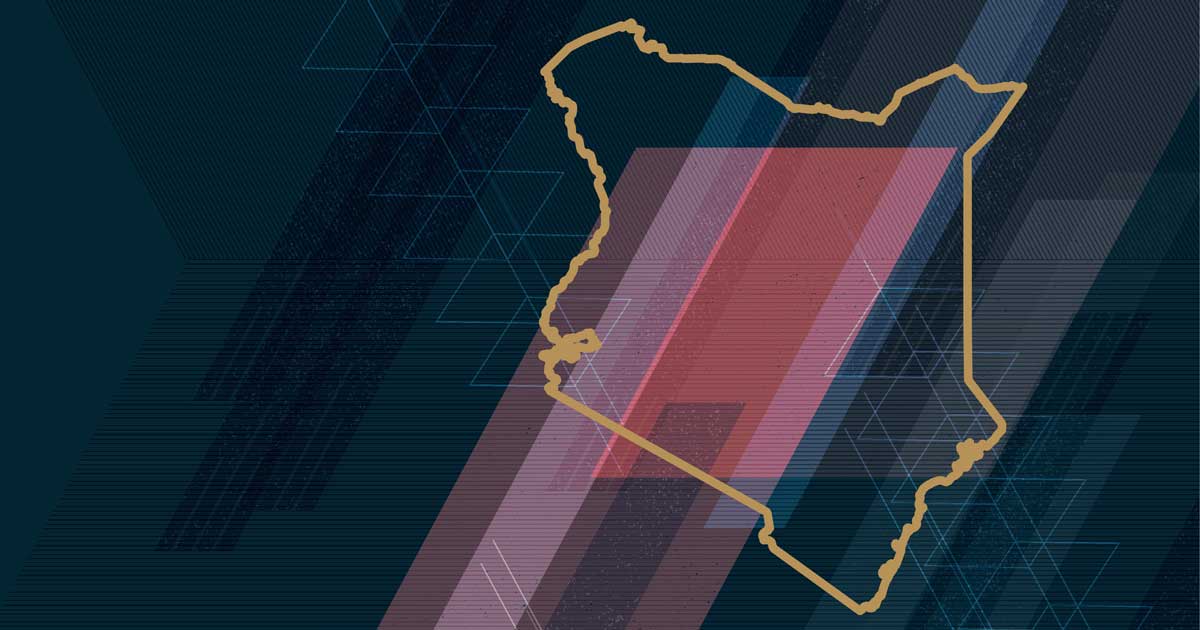 The United States’ relationship with Kenya delivers an estimated over $3 billion per year in tangible benefits to the Kenyan people and economy, according to a new report published by AidData, a research lab at William & Mary’s Global Research Institute. The report, Investing in Kenya’s People, is available online.

U.S. investment in Kenya's people and institutions traces back more than fifty years, as Kenya and the United States have been strategic partners since Kenya’s independence in 1963 and cooperate closely on economic and security issues. Since March alone, the U.S. government has given nearly $4.5 million to combat COVID-19 in Kenya and $19 million to Kenya, Ethiopia, and Somalia to fight East Africa’s worst outbreak of desert locusts in decades.

“Despite this long-standing relationship, Kenyan leaders and the public do not have information readily available to assess the value of their country’s partnership with the United States, as past research focused narrowly on individual projects financed by the U.S. government,” notes Samantha Custer, AidData’s Director of Policy Analysis. “We hope this report provides an initial baseline and paves the way for future research collaborations with Kenyan thought leaders on this important topic.”

To compile the report, AidData drew on a wide range of secondary data sources and a snap poll of 133 Kenyan leaders. The report is the first to give a holistic, whole-of-society view of U.S. contributions to Kenya’s economy and development. It not only quantifies direct U.S. government assistance, but also the value of indirect benefits from trade and other channels, such as foreign direct investment (FDI), revenue from American tourists, contributions from U.S.-based NGOs in Kenya, private foundations, and individual donors, and remittances from Kenyans working in the United States.

AidData will present the report’s findings and methodology in a virtual event co-hosted with the U.S. Embassy in Nairobi, Kenya on Thursday, June 18 at 3:30 pm EAT (8:30 am EST). The event will be live streamed at https://www.facebook.com/U.S.EmbassyNairobi/.

Only a third of the total American contribution to Kenya—roughly $1 billion annually—comes from foreign aid, the report finds. The rest includes benefits emerging from favorable trade policies and broader engagement with U.S. society. The $3 billion per year is significant, given Kenya’s yearly GDP of $99 billion in 2019.

In addition to large volumes of aid targeted towards Kenya's health sector, the United States has also been supporting Kenya on its security, peace building and conflict management priorities. Between 2010 and 2018, the U.S. government directed over $700 million in total to peace and security efforts, such as strengthening Kenya’s ability to counter terrorist threats from groups like Al Shabab, the al-Qaeda affiliated Somali insurgent group. The U.S. government also trained more than 3,400 Kenyan security officials over the same period.

“Given the challenges of quantifying non-official investments and financial flows, the estimated $3 billion per year in tangible benefits to Kenya from the U.S.-Kenya relationship are conservative estimates, and the total contribution of the United States to Kenya’s growth and development may, in fact, be far greater,” notes Mihir Prakash, Senior Research Analyst.

Kenya is now East Africa’s largest business, financial, and transportation hub, with 80% of East Africa’s trade flowing through Mombasa Port, according to the U.S. Department of State. Over the last two decades, Kenya increased its export revenues from the United States by over 285%. During the same period, the United States passed the African Growth and Opportunity Act and is now the largest overseas market for Kenyan textiles and the third largest importer of Kenyan exports across the board.

Kenya is also fast becoming a destination for foreign direct investment from U.S. companies. According to the report, American companies invested almost $300 million in Kenya’s economy and created over 1,000 new jobs each year since 2015, leading all countries in creating jobs that are occupied by Kenyans.

The report includes the perspectives of 133 Kenyan leaders in government agencies, universities, think tanks, and other prominent organizations, who were polled by AidData on how they view the U.S. impact on Kenya’s development. Ninety-five percent reported the United States as being actively engaged in contributing to Kenya’s development, and eighty-five percent of these respondents felt that the United States made a substantial contribution to helping Kenya achieve its development goals between 2010 and 2020.

After emerging from the severe 2011-2012 East African drought, Kenya's agricultural productivity has soared, from less than $4 billion in 2008 to around $20 billion in 2018. During this same period, U.S. assistance pivoted away from emergency food aid and toward mitigating climate risk, increasing yields, and boosting market access. As three in four Kenyans rely on agriculture for all or part of their livelihoods, individual incomes have risen in tandem, from roughly $1,050 in 2008 to $1,400 in 2018.

The report estimates that efforts to combat HIV/AIDS in Kenya have saved perhaps a million lives to date, as Kenya’s average life expectancy has steadily increased over the past two decades—from 51 years in 2000 to 66 years in 2018.

Commenting on the report, Kwame Owino, CEO of the Institute of Economic Affairs, based in Nairobi, notes that "....the most profound contributions come from trade and investment that have an effect on markets, on the one hand, and the extremely important confirmation that the US government has been a pillar in supporting health outcomes in supporting HIV, malaria and tuberculosis treatment, on the other hand.”

One out of every three dollars in the report’s $3 billion per year valuation of the total U.S. contribution to Kenya comes from broad engagement with U.S. society. In addition to the FDI mentioned above, examples of contributions from U.S. society include:

"We hope that this report has provided a helpful baseline for Kenyan citizens and leaders to assess for themselves the value they derive from their country’s partnership with the United States," added Samantha Custer.