The First Tranche
AidData's Blog
What would it cost for our cities to be sustainable by 2030?
The Cloudera Foundation awards AidData $1,152,000 to expand use of GeoQuery for social impact
No items found.
No items found.

Users can now access more than 60 geospatial datasets for 200 metropolitan areas across the globe through GeoQuery. 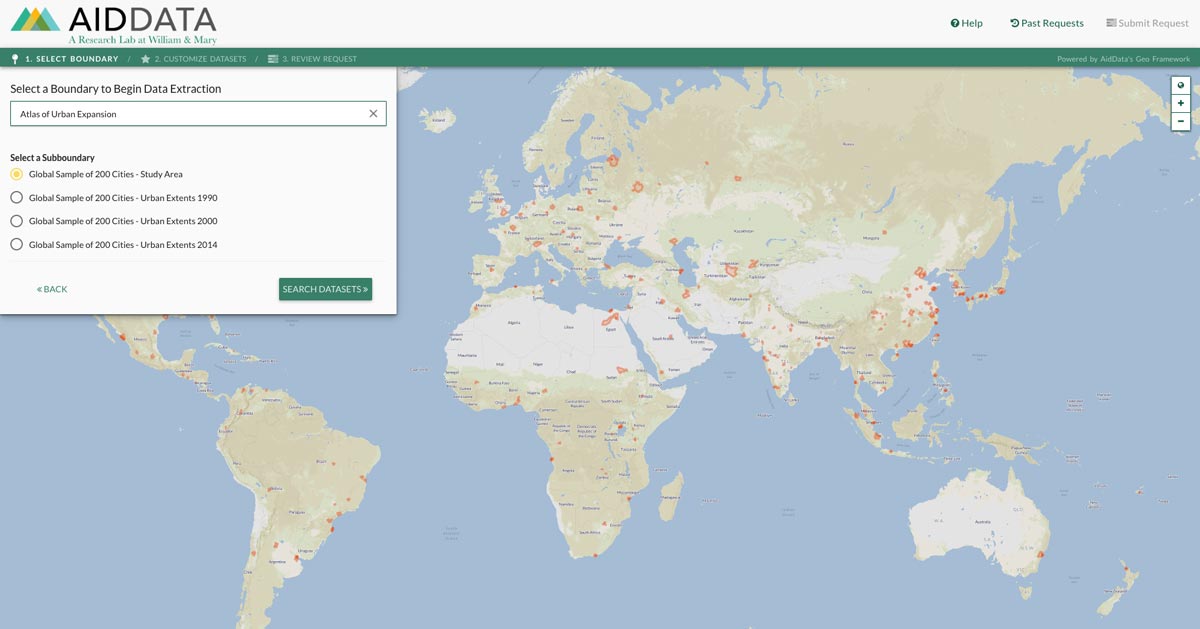 GeoQuery, AidData’s flagship platform for creating customized geospatial datasets, now contains the urban boundaries of 200 cities across the world, enabling users to get aggregated data for cities from Mexico City to Mumbai. More than half a dozen new or updated datasets on topics relevant to cities have also been added to GeoQuery, including global data on CO2 levels, travel time to cities, and yearly climate data.

To freely access and download more than sixty geospatial datasets for cities, visit GeoQuery.org and search “Atlas of Urban Expansion”.

The addition of city boundaries data to GeoQuery comes at an opportune moment for decision-makers and stakeholders seeking to transform their cities. Just over half of the world’s population now lives in cities, and rapid urbanization will bring that number to two-thirds by 2050, the majority of whom will live in developing countries. Sustainable cities and communities is therefore a key development priority, and more than 3,000 delegates from 116 countries have gathered this week in Nairobi for the inaugural UN-Habitat Assembly on innovation to transform cities, where they will discuss the challenges and opportunities that rapid urbanization presents.

Read about AidData’s efforts with UN-Habitat to estimate the cost for cities to be sustainable by 2030.

Yet, even as national leaders and city planners place renewed focus on the needs of urban communities, there remain real limitations in the information available. Decision-makers need granular, city-specific data for informed policy decisions—but much of the existing data on poverty, population, economic growth, and other key indicators only exist at the district or province level. Cities often overlap multiple district boundaries, limiting our ability to analyze historical trends in urbanization and plan for future sustainable growth.

To fill this data gap, AidData has added the urban boundaries for 200 global cities to GeoQuery, our free and open-source online platform for accessing and integrating geospatial data. This will allow researchers, policymakers and civil society and nonprofit groups to request and receive data from more than sixty geospatial datasets aggregated to city boundaries for a diversity of urban areas, from Accra to Zhengzhou, that contain at least 100,000 people.

With GeoQuery, users seeking geospatial data can already find and integrate quality-assured datasets on key topics—including aid, conflict, climate, economic development, and the environment—for more than 190 countries and territories across the world. Now, in addition to filtering and aggregating data by provinces or districts in those countries, users will be able to get data aggregated to the boundaries of these 200 cities as well. For example, a user could obtain data on average GDP, population density, and air temperature for more than a dozen major cities in India.

The urban boundaries available in GeoQuery are curated from the Atlas of Urban Expansion, a project of New York University, UN-Habitat, and the Lincoln Institute of Land Policy that seeks to monitor, map and measure global urban expansion. More than two-thirds of the 200 cities from the Atlas of Urban Expansion now added to GeoQuery are in low- or middle-income countries, where the rate of urban population growth is fastest.

In addition to the urban boundaries data, a suite of new and updated geospatial data on city-relevant topics is also now available on GeoQuery. New environmental data, on solar and wind power potential and global CO2 levels for years up to 2018, has been added. Global datasets with yearly average precipitation and air temperature have been updated to 2017; a dataset on travel times to cities has been updated to 2015; and a new version of NDVI (a measure of how green an area is) through 2018 is also now available.

As urban populations continue to expand, it is critical that policymakers, researchers, and civil society and nonprofit groups can access the data they need for informed decision-making about urban development issues and the particular challenges and opportunities that cities present for sustainable development. The addition of city boundaries to GeoQuery helps expand access to the data these organizations need to find solutions for some of the world’s most pressing development issues.

GeoQuery’s development is supported by generous funding from the Cloudera Foundation, which seeks to identify large-scale opportunities and projects where the application of advanced data analytics and machine learning can change people’s lives for the better. AidData will continue to develop GeoQuery through its partnership with the Cloudera Foundation, making geospatial data more accessible to those seeking to tackle some of the world’s greatest challenges.