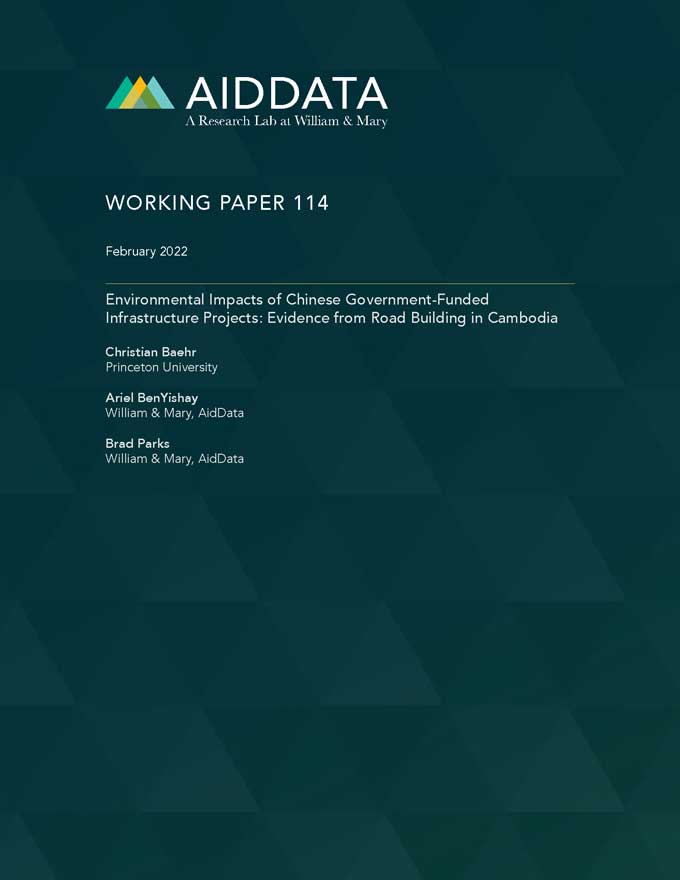 China’s international development finance commitments now average $85 billion annually, roughly double those of the U.S. Much of this funding is spent on infrastructure upgrades, yet very little is known about the environmental risks posed by these projects. We study the impacts of Chinese government-funded road improvements in Cambodia, where over the past two decades China’s state-owned banks have supplied more than $4 billion for 30 projects building, rehabilitating or upgrading over 3,000 km of major roadways. Cambodia’s forests contain some of the most biologically diverse habitats in the world, and have experienced dramatic deforestation over the past two decades. We generate and subnationally geo-reference a dataset of Chinese government financed road projects between 2003 and 2021. We then merge these project data with two decades of satellite data on forest cover. Using the spatial and temporal roll-out of the highway improvements for causal identification, we find that these led to significant declines in forest cover, particularly in nearby plantations, where more than half of tree cover was lost. These effects first appear not long after construction begins, and grow even larger in the years after construction is completed. The effects are driven by changes in market access for rubber plantations, and are magnified or dampened as global rubber prices rise and fall. The largest forest losses occur around new roads in northern Cambodia, where other foreign funders have avoided new highway construction. Thus, the Chinese government’s funding of new road infrastructure in developing countries may pose distinct threats to local environments.

Highway to the Forest? The Siting and Environmental Impacts of Chinese Government-Funded Road Building in Cambodia