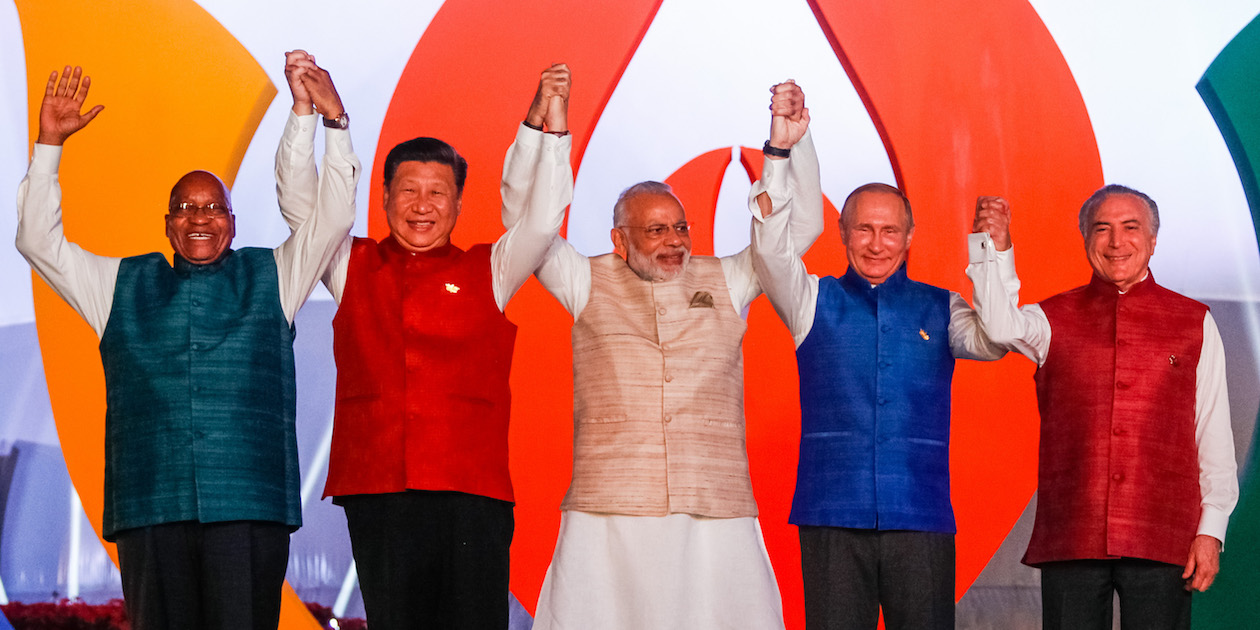 The leaders (l-r) of South Africa, China, India, Russia and Brazil meet in Goa, India for the 2016 Annual BRICS Meeting. Photo by Beto Parata/PR via Flickr, licensed under (CC BY 2.0).

New data and analysis from AidData, a research lab at William & Mary, shows that China’s expanding foreign aid portfolio is translating into greater influence with leaders in countries receiving Chinese aid, but that it still trails far behind the U.S.

While China has gone from net aid recipient to one of the most important foreign policy players in the world, little was known about how Beijing was viewed by the targets of its overtures. Drawing on a global sampling frame of more than 58,000 leaders in 126 low- and lower-middle income countries to survey their most pressing policy challenges and their views on the donors they work with, AidData benchmarked 35 donors including China on two indicators of performance: influence in shaping in-country policy priorities, and helpfulness in implementing policies.

The results, which are included in the newl Listening to Leaders 2018 report, show China leap-frogging eight places since AidData’s previous survey in 2014, moving from 29th (out of 33) to 21st (out of 35) on a ranking of the most influential development partners. This rise catapults China into the middle quintile of donors from its previous spot among the least influential donors — the only non-Western nation to make a jump of that size. At 21st place, China now nudges out Japan (25th) and India (24th) for influence.

But India rose too in influence, jumping up seven spots from its 31st position in 2014. Notably, India outperforms China on the 2017 helpfulness ranking, landing seven spots ahead of Beijing, which continues to rank in the bottom fifth of donors.

AidData additionally compared donors’ influence and helpfulness scores against the total size of aid (Official Development Assistance) they committed from 2005-2013 to survey recipients’ countries, providing one way of exploring which donors are getting value for money.

“While money may not buy love, it does give donors a seat at the table,” said Samantha Custer, AidData’s Director of Policy Analysis and lead researcher on the Listening to Leaders 2018 report. “South-South donors like China and India are just getting started, taking incremental steps to expand and professionalize their development cooperation programs. The Chinese government’s March 2018 announcement of its intention to establish a new international development cooperation agency to coordinate its foreign aid efforts is illustrative of this growing confidence and intentionality.”

As a virtual ‘customer satisfaction survey’ on foreign aid providers, “this survey is unique in seeking the perspectives of an audience usually overlooked: leaders in the countries that receive foreign aid,” Custer added. Also unusual, the survey asks leaders to assess not individual aid projects, but donor organizations or donor countries as a whole.

The assessment finds China excelling in one particular sector: infrastructure. Beijing surpassed US influence in the sector for the first time in the 2017 survey wave. “In light of the ‘One Belt, One Road’ Initiative and the launch of the Asia Infrastructure Investment Bank, it’s perhaps unsurprising that these targeted investments are “cementing” Beijing’s reputation as a premier provider of infrastructure assistance, paying off in increased influence with sector leaders in developing countries,” said Custer.

The idea that China is about to eclipse traditional donors, however, is overstated. Beijing is still middle-of-the-pack in terms of influence with leaders in aid recipient countries, failing to crack the top 20 and far behind leaders like the U.S. (3rd), the World Bank (2nd) and the EU (4th). China is even further behind on helpfulness, ranking outside the top 30 and below donors like Norway and Belgium.

“Actors like China and India often have quite different motivations for development cooperation than their Western counterparts,” said Custer. “Many of them espouse a principle of non-interference in the internal affairs of their partner countries. The fact that non-traditional aid actors are not seen as particularly influential in the domestic decision-making processes of other countries is consistent with their stated mandate.”

This new research complements AidData’s widely-reported work over the past six years tracking and analyzing Chinese aid (aiddata.org/china). In October 2017, AidData released the first-ever global dataset on China’s overseas development spending, pulling back the curtain on a program that — by Beijing’s design — had largely been an informational black hole. Years in the making, this data collection effort captured more than USD $350 billion in foreign aid and other forms of state financing that China committed from 2000-2014. The dataset comprises more than 4,300 projects in 140 countries and territories, the most comprehensive and detailed source of project-level information on China’s global development footprint that has ever been assembled.

In addition to the Listening to Leaders 2018 report, AidData has several pending milestones in 2018 on China’s international activities: