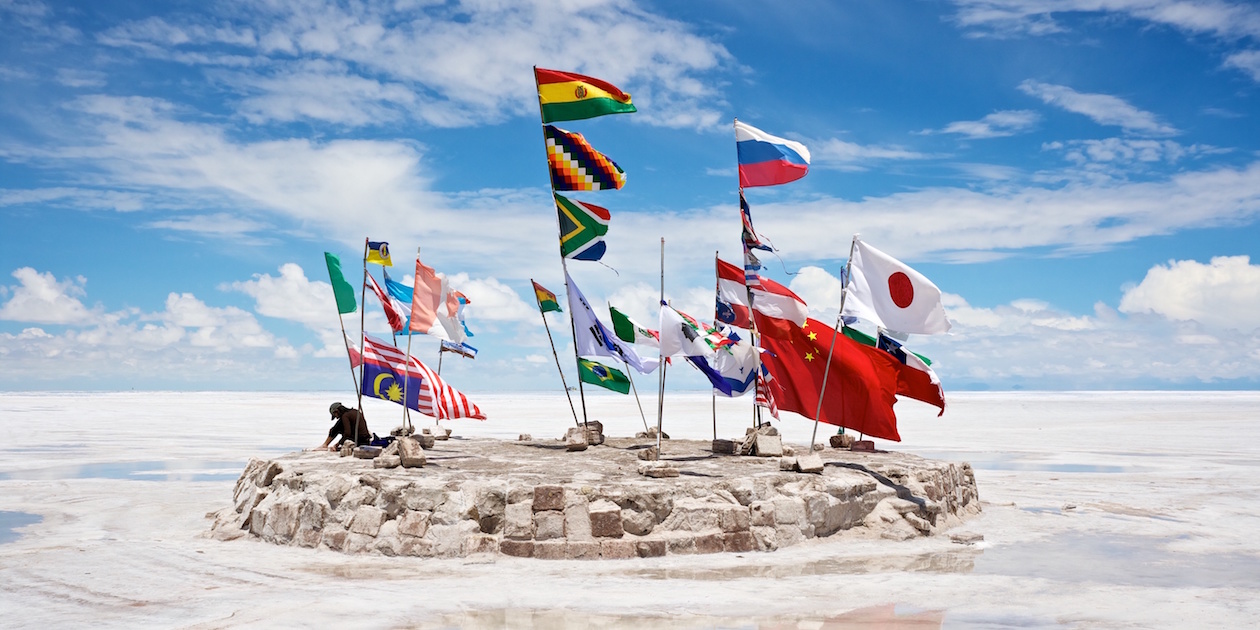 Country flags fly at the Salar de Uyuni salt flats in Bolivia. Photo by Nico Kaiser via Flickr, licensed under (CC BY 2.0).

The U.S., China, and India continue to rise through the foreign aid ranks in influence and helpfulness, according to a unique survey of nearly 3,500 leaders in the world’s developing countries. At the same time, two less well-known global health organizations are beating bigger rivals at their own game, while several European bilateral aid agencies are losing ground.

These are a few of the findings from a new report, Listening to Leaders 2018, by AidData, a research lab at William & Mary.

The U.S. rises four places (from 7th to 3rd) in the report’s ranking of influence, and places 8th in helpfulness, up five spots from AidData’s previous survey in 2014. The EU is a top-five performer on both scales; France catapults up 12 places on perceived helpfulness, the single largest gain on either index.

But developing world leaders still give their highest marks for helpfulness and influence to multilateral aid agencies like the World Bank, the International Monetary Fund (IMF), UNICEF, and UNDP. “This finding is all the more important as multilateral agencies come under increasing scrutiny from the national governments and other organizations that ultimately fund them,” said Samantha Custer, AidData’s Director of Policy Analysis and lead author of the Listening to Leaders 2018report. “What we see is that through decades of patient investment and engagement, multilaterals have earned extraordinary amounts of trust from leaders in poorer countries. We would urge caution in any shift that might jeopardize these gains or signal an intention to re-balance the relationships developed.”

The research serves as a virtual ‘customer satisfaction survey’ on foreign aid providers, and is additionally unusual because it asks leaders to assess not individual aid projects, but their perceptions of donor organizations or donor countries as a whole.

AidData benchmarked 35 donors on two indicators of performance: influence in shaping in-country policy priorities, and helpfulness in implementing policies. International organizations and bilateral aid providers with deep pockets and global reach have the most influence.

But there are also small-but-mighty players punching well above their weight. First place in helpfulness is GAVI, a Geneva-based international organization focused on childhood vaccines. The top five is rounded out by the IMF (2nd), UNICEF (3rd), the World Bank (4th), and the EU (5th).

The findings come amidst debates about America’s standing in the world, rivalry with China, and the rise of other emerging powers, and discussions in many donor capitals about whether and to what degree foreign aid should advance national interests.

In 2017 AidData reached out to a sampling frame of 46,688 individuals in 126 low- and lower-middle-income countries and across 22 policy domains (including health, finance, agriculture, water, education, etc.) who had served during the period 2010-2015. The researchers asked leaders what they think are the most important policy challenges for their countries to solve, the blockers and enablers to progress, and how they assess the contributions of the international donors with which they work. A total of 3,468 individuals responded to the survey.

“Debates about foreign aid are often dominated by experts in Western capitals,” said Custer. “What makes this survey unique is that it prioritizes the perspectives of an audience usually overlooked: government officials, civil society leaders, in-country donors and private sector representatives in countries where decisions around these issues will affect lives and futures.”

To see how leaders’ perceptions of donors have changed over time, researchers compared the new findings to AidData’s previous survey of 6,750 leaders in 2014.

The U.S. rises five places to place 8th in perceived helpfulness, and gains four places to place 3rd in influence. China jumps up eight places in terms of influence, but overall finds itself in the middle of the pack of all donors, and in the bottom fifth in terms of helpfulness. India also jumps ahead in the rankings since 2014 to place 24th on both measures.

“Donors like China and India often have quite different motivations for development cooperation than their Western counterparts,” said Custer. “Many of them espouse a principle of non-interference in the internal affairs of their partner countries. So the fact that these actors are not seen as particularly influential in the domestic decision-making processes of other countries is consistent with their stated mandate.”

The UK, Germany, and France have also made gains in influence and helpfulness over time, while the list of countries slipping includes Sweden, the Netherlands, Spain, Australia, and Belgium.

“The smaller bilaterals may have a problem of over-reach: they have fewer development cooperation dollars to work with than the blue-chip donors, but have comparably broad mandates,” said Custer. “There is another possible explanation: many of these donors have made an explicit commitment to increase their focus on fragile and failed states. It is likely that leaders in fragile or failed states may view donor performance differently (and perhaps more negatively) in light of the challenges they face in getting traction for policy reforms.”

Top issues, and failing the environment

Leaders were asked to rank their top development priorities, selecting from the UN’s 17 Sustainable Development Goals (SDGs). Throughout the developing world, leaders most frequently cite “quality education” (61 percent), “decent work and economic growth” (55 percent), and “peace, justice, and strong institutions” (55 percent) as top priorities for their countries. In a breakdown across all stakeholder groups and regions, leaders consistently identify some ordering of these three goals as their top three priorities. Eliminating poverty was only the seventh-ranked challenge to be tackled.

Health of the planet fares badly: climate action falls towards the bottom of the league tables for both citizens and leaders in every region except one group and region — leaders in East Asia and the Pacific.

“Citizens and leaders generally prioritize issues with near-term, tangible benefits for individuals such as education and jobs, as compared to less tangible challenges with a longer time horizon, such as climate change or energy policy,” said Custer.

AidData also compared donors’ influence and helpfulness scores against the total size of aid (Official Development Assistance) donors committed from 2005 to 2013 to survey respondents’ countries, providing one way of exploring which donors are getting value for money.

UNICEF, UNDP, GAVI, Global Fund (another Geneva-based international organization, this one fighting AIDS, tuberculosis and malaria) and Denmark are adept in converting relatively modest means (each gave less than US$15 billion in ODA to those countries included in the survey) into outsized agenda-setting influence.

The narrative is similar on the helpfulness metric, where GAVI leapfrogs donors with much deeper pockets to claim first place. The Global Fund places in the top seven in both rankings — high scores for two organizations with whom many will not be familiar.

“Money is a powerful tool to capture the attention of busy policymakers, but the financial size of a donor is not necessarily deterministic of its perceived influence or helpfulness,” said Custer. “The specialization of GAVI and the Global Fund may be an advantage: the more narrowly a donor defines its target constituencies, the greater ability they have to cultivate deep relationships with fewer leaders and customize their offerings to their needs.”

Japan, a large bilateral donor, held ground on influence and slightly gained on helpfulness between 2014 and 2017, but finishes in the middle of pack on both measures, despite massive ODA commitments to survey respondents’ countries comparable in size to those of the World Bank and the EU. On the plus side, Japan is the second-largest donor to the IMF and the World Bank, the top two donors in terms of influence.

“Country ownership” — the opposite of aid with strings attached — is a hot topic in development circles. Not surprisingly, then, leaders who have more say in how foreign aid is deployed within their borders generally give their development partners higher marks in influence. “Countries that can program more of their assistance dollars for themselves, rather than having these decisions made for them by the donor, actually hold development partners in higher regard, not less,” said Custer. “This finding should give ammunition to donors seeking to justify the importance of preserving the flexibility for countries receiving assistance to determine how they will use it to further their goals, rather than dictating terms.”

At the same time, AidData finds that this does not mean that leaders in poorer countries want donors to be less engaged — instead, they want their development partners to actively participate in domestic policy discussions, and work closely with government counterparts to build support for policies across the public, private, and civil society sectors.