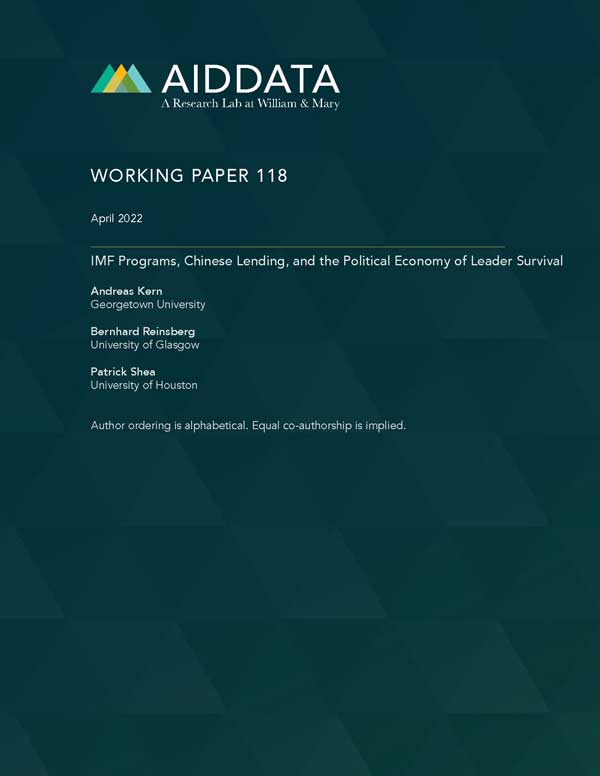 How China’s lending activities affect the political survival of leaders

A new AidData Working Paper explores how the co-occurrence of Chinese loans and IMF programs affects leader tenure, finding that Beijing’s loans prolong the tenure of leaders—especially if they are corrupt. 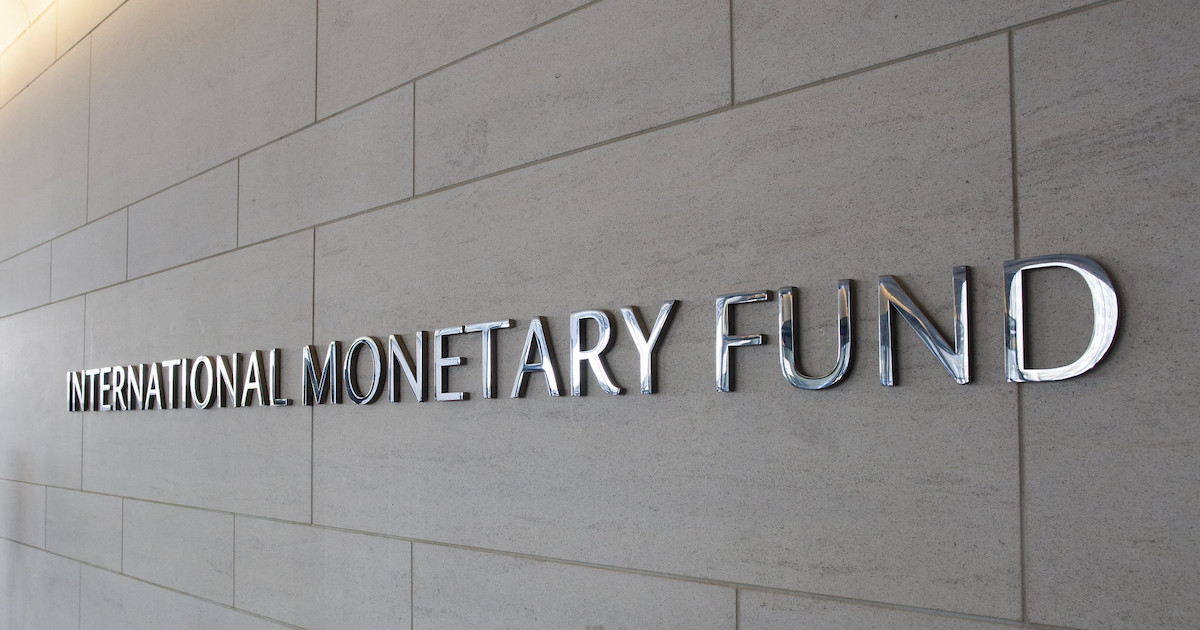 ‍Editor’s Note: This guest post by Andreas Kern (Georgetown University), Bernhard Reinsberg (University of Glasgow), and Patrick Shea (University of Houston) covers their new AidData Working Paper, “IMF Programs, Chinese Lending, and the Political Economy of Leader Survival.” The views expressed in AidData Working Papers are those of the authors and should not be attributed to AidData or funders of AidData’s work.

China has become a major global lender to developing countries, with total cumulative loans worth more than $800 billion from 2000-2017, according to AidData. While much of this lending has contributed to economic development by supporting infrastructure investments, it has also led to concerns about increased corruption,  an erosion of democratic accountability, lower levels of compliance with aid conditionality, and environmental degradation.

Surprisingly, little research exists on how the availability of Chinese credit affects the fortunes of political leaders. Political leaders matter: some, like the current incumbent of Rwanda, are celebrated for unleashing sustainable development, while others spread fear and sap their countries of their wealth. There is an extensive body of research on the determinants of leader survival in office. Previous research also confirms that leadership survival is a function of access to sovereign credit. However, to the best of our knowledge, no study has examined how Chinese loans affect the tenure of political leaders.

Our new AidData working paper addresses this knowledge gap. Our work builds on the premise that a significant portion of Chinese loans may be linked to kickback schemes that directly benefit leaders and elites. An illustrative case is the Republic of Congo, where “$1.163 billion in loans from China to Congo in exchange for minerals, a project dubbed Sicomines, had gone missing, with no evidence that the money had been disbursed for infrastructure projects.” Building upon previous research on leader survival, we expect that leaders will strategically use Chinese loans to extend their time in office—by paying off elite supporters and building infrastructure projects to foster popular support. Our first hypothesis following this argument, therefore, is that Beijing’s loans prolong the tenure of leaders—especially if they are corrupt.

The situation is different when governments are at risk of defaulting on Chinese loans. Many Chinese loan-financed projects are built on risky foundations – for example, many borrowing governments pledge future export receipts and project revenues as sources of collateral that can be seized in the event of default. At current levels of public debt exposure to China, this implies huge balance-of-payments risks. While China tends to be a patient lender, the amount of credit that it extends to countries in fiscal distress may not be sufficient to rescue governments from dire financial straits. Sri Lanka is a case in point. From an economic perspective, this leaves leaders with few options other than turning to the International Monetary Fund (IMF). However, IMF programs do not come as a free lunch, as leaders must commit to administrative reforms and market-liberalizing policies. The transparency requirements of the Fund as part of its lending programs are particularly threatening to corrupt leaders’ survival. These requirements make it harder for such leaders to conceal their illicit activities. Our second hypothesis, therefore, is that when countries have accumulated significant amounts of Chinese debt, turning to the IMF shortens the tenure of their political leaders.

Relying on a dataset that covers 120 developing countries between 1981 and 2015, we examine how the co-occurrence of Chinese loans and IMF programs affects leader tenure. We find that Chinese loans reduce the hazard of leaders leaving office by 20 percent. Further analysis shows that the effect is more pronounced for corrupt leaders but insignificant for non-corrupt leaders. In addition, we find that when leaders indebted to China conclude an IMF program, they increase their hazard of leaving office on average. Further analysis shows that more corrupt leaders increase their risk of ouster when borrowing from China and participating in IMF programs. By contrast, there is no such effect on non-corrupt leaders. These results are consistent with the argument that IMF programs—with their transparency requirements—threaten to upend corrupt schemes in Chinese loan-financed projects. In other words, the leaders most at risk when going to the IMF are those misusing China loans for political purposes.

Additional analyses lend further support to this interpretation. Specifically, as corrupt leaders have the most to lose when their misdeeds are uncovered, they should leave office relatively quickly after the arrival of the Fund. When corrupt leaders leave office, they not only lose power but also face consequences for their behavior. Many leaders accept exile in these cases, avoiding prison for their illicit activities. Corrupt leaders that accept Chinese loans and IMF programs go into exile at a rate of 17 percent, while no non-corrupt leader has gone into exile under the same lending conditions.

At the same time, corrupt leaders have incentives to build a financial “parachute” to provide resources in the event of ouster and exile, without fear that this money can be seized or frozen by domestic or international actors. Safe havens provide leaders a way to store money until an emergency. Drawing from data on bank deposits from the Bank of International Settlements, we measure the deposits in safe-haven countries as a percentage of total deposits abroad. Our results suggest that corrupt leaders are likely taking a cut from Chinese loans and storing them in offshore accounts for their post-tenure life. For example, Zambian leader Edgar Lungu—having defaulted on the country’s international debt commitments and approaching the IMF for a bailout—peacefully yielded power to his successor Hakainde Hichilema while leaving the country drowning in debt. While the Lungu administration reported $3.4 billion in Chinese loans in its annual budget, the incoming Hichilema administration was taken by surprise that the actual Chinese debt burden stood at $6.6 billion—with the difference missing and suspected to be held in offshore accounts by the ruling elite.

Our results suggest a trade-off for political leaders between long-term political survival from tapping Chinese loans and short-term financial relief when enlisting the support of the IMF. They also suggest an interesting sorting pattern in the global regime for emergency lending: the most corrupt countries (somewhat paradoxically) have the greatest incentive to turn to the IMF for a bailout. Undergoing the painful treatment of IMF conditionality effectively allows leaders to signal that they only want the best for their country. Since the IMF has no means to eliminate kickback schemes, leaders simply trade their tenure for the a financial parachute, knowing that their wealth is safely deposited in offshore havens. From a global policy perspective, the IMF is well advised to keep insisting on strong transparency and accountability frameworks before providing a financial lifeline.