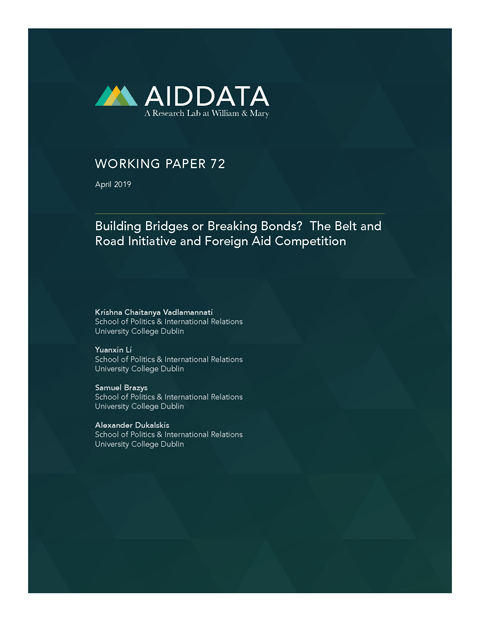 China’s renewed prominence is the most important development in international relations in the 21st century. Despite longstanding rhetoric of its own “peaceful rise”, China is increasingly viewed as a long-term strategic competitor, especially in the United States. Foreign aid is one arena where this competition may be playing out. While Western foreign aid principles have emphasized coordination and harmonization, the rise of China as a major development partner has raised the specter of a return to competitive foreign aid practices. Most notably, China’s Belt and Road Initiative (BRI) has received a wary reception by some who view it primarily as a geostrategic effort. We test if the BRI is inducing a competitive foreign aid response by evaluating if countries involved in this initiative are more likely to receive US support for loan packages from the major, Western multilateral development banks (MDBs). Using an instrumental variable approach covering 6,975 project/loan packages in 16 MDBs from 157 countries during the 2013-2018 period, we find that the United States is more likely to vote for MDB packages to countries that have signed on to the BRI, predominantly when the actual amount of Chinese aid flowing to those countries is still low, suggesting the US is competing for “in play” countries.