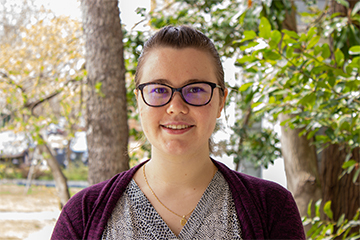 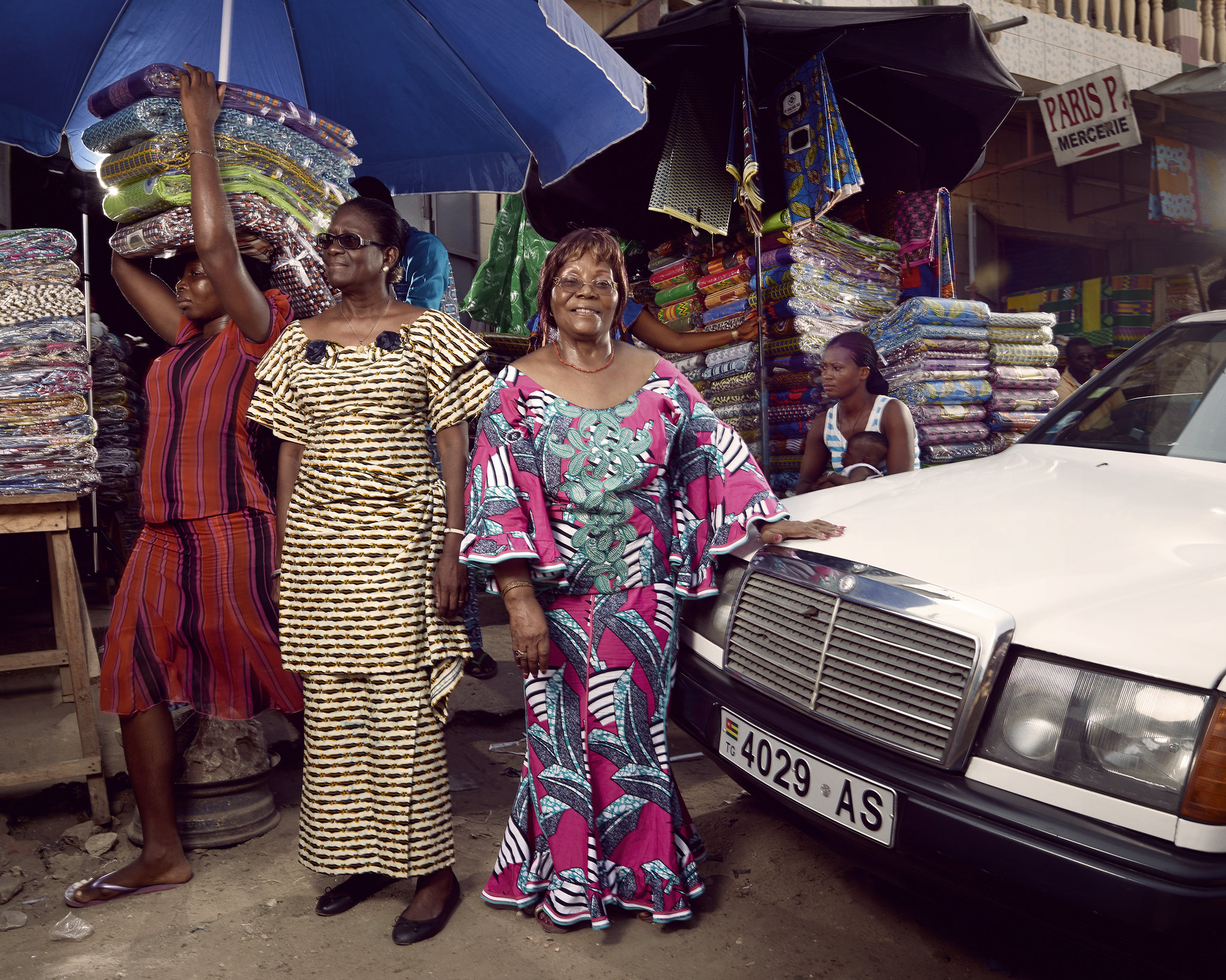 Evelyne and Adoko, seasoned fabric traders, at their shop in a commercial district of Lomé. The Nana Benz women were a group of Togolese fabric traders who became activists for women’s liberation, selling fabric prints bearing names such as “If You Go Out, I Go Out,” and “When a Woman Passes, Men Pass Away.” Photo by the World Bank/Stephan Gladieu via Flickr, licensed under (CC BY-NC-ND 2.0).

Gender inequality costs the world $160 trillion in lost human capital wealth, according to the World Bank. Even in post-Covid recovery programs currently underway, gender equality is being overlooked, risking decades of progress. Yet current measurements of development progress obscure or mask important differences in the ways women experience many development interventions.

Three researchers at AidData—Katherine Nolan, Rachel Sayers, and Jessica Wells—are turning their attention to this critical intersection of gender and sustainable development. Their new initiative on Gender Equity in Development will focus on testing and piloting innovations in research to reduce gender bias in development.

Turning their ideas into a concrete work plan, Nolan, Sayers, and Wells created a concept note with input from across AidData that serves as a shortlist of high-priority projects. They are interested in improving the measurement of gender-related outcomes; identifying gender indicators that can be measured through geospatial methodologies; exploring the dynamics of household bargaining; analyzing how farming experiences vary by gender; identifying the interactions between gender and land rights; reducing barriers to women’s employment; and exploring women’s mobility in urban spaces.

“When we look at development programming, women are often viewed as passive recipients rather than active creators. Only now are we starting to see programs focusing on women as catalysts for development in their own right. Any work focused on economic development must take women’s empowerment into account in order to be considered equitable,” says Jessica Wells, a Senior Program Manager.

The gender biases in development can run deep, potentially distorting both the questions that researchers and program evaluators ask and the answers they get. “Take, for example, machine learning-based outcome measures or poverty estimates that use household surveys. They’re becoming a staple of development program evaluations, but these outcome measures could have potential bias associated with them that is yet to be explored. The household surveys used to produce these outcome measures are often based on data that is collected from heads of households, which are more likely to be men,” says Katherine Nolan, a Research Scientist. “So a project could show a large positive impact on households, yet because the data is skewed towards men, the project may have had positive impacts on men but only a slightly positive—or even a negative—impact on women. Results that seem great on the surface may actually be less beneficial for women’s development in the long run. The key question is: how can we identify those biases, shed light on them, and attempt to correct them?” asks Nolan.

While the Gender Equity in Development initiative may be new to AidData, the work is not. AidData’s previous work on gender includes projects on how gender-based violence against children and youth affects educational attainment levels; how applying data can increase the effectiveness of HIV/AIDS prevention efforts for girls and young women; and a forthcoming project funded by the German Institute for Development Evaluation, DEval, examining how irrigation programs in Mali impact women’s empowerment.

“One of our first grants under the new Initiative is funded by Innovations for Poverty Action’s Research Methods Initiative,” says Senior Research Analyst, Dr. Rachel Sayers. “We’ll be using remote sensing to quantify the measurement error in self-reported survey data and see how error differs by gender and by owner of agricultural plots. We’ll also use lab-in-the-field games to measure how this measurement error relates to household bargaining power and income hiding. This will provide crucial information on how self-reports of assets may differ by gender among household members, and how future surveys could correct for this bias,” adds Sayers. The project will be implemented as an add-on to existing work with a local partner in Ghana, the Center for Democratic Development (CDD), which was funded by the Hewlett Foundation.

While AidData’s past work has touched on gendered analysis, the researchers involved in the Gender Equity in Development initiative bring a diversity of skills that span a wide range of sectors in development. The initiative’s founders argue that this multidisciplinarity puts AidData in a unique position to answer questions that have previously been difficult for development researchers to explore.

Having conducted more than a dozen impact evaluations of development programs, AidData has a deep bench of experience in geospatial research, remote sensing, machine learning techniques, on-the-ground surveys, and rigorous econometric analysis. What’s more, the researchers at the core of the initiative bring a wealth of additional skills to the table, including experience conducting household and community surveys, expertise in quasi-experimental causal analysis, and a strong commitment to inclusion of local stakeholders.

Nolan has more than eight years of experience conducting surveys in the field in Africa and Asia. Her past projects include working on women and children’s health, which entail gender-related modules and anthropometric measurements. Currently, she is working on a retrospective evaluation, using geospatial matching techniques and household surveys of a child and maternal health project in Bangladesh. Wells has an M.P.P. and has worked in international development for the last nine years, managing partnerships with funders and in-country organizations at AidData. Her research interests lie at the intersection of gender and development, and specifically in understanding the linkages between land rights and women’s empowerment. Sayers has an economics Ph.D. in development, with a particular interest in quasi-experimental causal identification. Her research focuses on household bargaining, labor markets, and identifying the gender disaggregated impacts of development programs and policies. Together, Nolan, Sayers, and Wells are working on a retrospective evaluation of the impacts of small earth dams on women’s livelihoods and empowerment in northern Ghana—one project of many forthcoming from the initiative.

“Moving forward, we’re exploring using machine learning techniques and ground-truthed data to better measure gendered outcomes in agriculture from space. As a specific example, take the fallowing hypothesis: the idea that female farmers may have lower yields because they aren’t as comfortable letting their land lie fallow,” says Nolan.

“Previous research on fallowing has generally been done using just household surveys in a limited time frame. A combination of GPS locations of plots, high-resolution satellite data on yields, and on-the-ground data would let us examine how men and women’s use of land differs, including how often they let their land lie fallow and how different their yields are. This is a meaningful difference in outcomes for men and women that hasn’t been well-quantified before with remotely sensed data,” Nolan continues. As part of the team’s recent work in Ghana, AidData collected this information for men and women’s plots, as well as household survey data on topics like plot decision-making, fertilizer and irrigation use, and types of crops planted. The researchers plan to use this data to examine past usage of plots and continue analyzing usage over the coming years.

“In household surveys, men and women often give different answers to the same questions about their household. Such questions include subjective measures, such as decision-making power, and also objective measures, such as household asset ownership. We understand that these differences exist, but we are still uncovering what household dynamics lead to these reporting differences and under what circumstances. Understanding this relationship will allow us to identify which households may have larger divergences in these reports and address it at either the data collection or analysis stage,” says Sayers. The team’s research in Ghana addresses this question by considering the magnitude and structure of measurement error in agricultural self-reports, and how household bargaining power and income hiding behavior influences this error.

Another key focus area for the team lies at the intersection of gender and land rights. In developing countries, women frequently have legal rights to land on paper but these are functionally abrogated because of local customs, with a significant gap between the law on the books and what is in practice. Women are often allowed to work (but not own) land, may be relegated to only certain types of land plots, or have limits placed on what types of crops they are allowed to plant in their fields.

Land tenure challenges that women face have implications for other issues, such as household bargaining power. “Are there measurable differences in bargaining power, in inheritance of assets, between women who do and do not own their own agricultural plots?” asks Wells. “What I am most interested in are these interrelated pieces between land rights and empowerment, since this is a significant barrier to women’s economic participation in many countries.” Building on this, the AidData team will look to partner with organizations that are working on land titling programs to understand their impact, especially differential impacts by gender.

The Gender Equity in Development Initiative encompasses work on gender beyond the three founders, as other teams at the lab contribute time and talent to projects. Ammar Malik, a Senior Research Scientist and the director of AidData’s Chinese Development Finance Program, is pursuing projects that explore the underlying factors behind why women’s urban mobility tends to be poorer, even when major public investments are made to improve transport services. His prior research at the Urban Institute and Harvard’s Kennedy School of Government has investigated the environment that perpetuates the harassment of women in urban public spaces in Pakistan, examined how environmental degradation disproportionately affects women’s economic empowerment across South Asia, and identified key barriers to women’s participation in more productive sectors of the economy.

“Compared to men, women generally have a more difficult time navigating urban public spaces. This is particularly true for public transportation systems where their safety considerations are seldom addressed by law enforcement. This affects their ability to access markets, gain employment, and have an impact on the economy,” says Malik.

As the Gender Equity in Development team moves forward, they’re working to incorporate a gender lens into as much of their existing workstream as possible. AidData is continuously looking to add gender outcomes and research questions to newly obtained grants, as well as seeking out new funding with a primary gender focus. “Using the methods and skills that are unique to AidData, we’re building a research agenda that has a sustainable long-term view and pushes boundaries to influence not only research outcomes, but also policy discussions worldwide,” says Wells. The ultimate goal is that these efforts catalyze new research and development on gender that ripples far beyond AidData. The team hopes that the new methods and gender-sensitive outcome measures they pioneer will be turned to by other researchers on other projects to help answer questions with real-world impact.

Monica Maher is a Partnerships Associate at AidData.