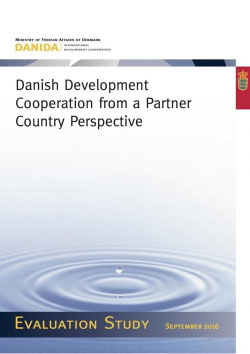 Small but mighty: Denmark ranks highly as a development partner, according to report

Denmark is one of only six countries in the world to achieve the UN's development assistance target, though this is only part of the equation for development success. How do Denmark’s development efforts measure up from the perspective of its partner countries?

The Danish flag flies over the skies of Copenhagen, Denmark. Photo by Jacob Bøtter, licensed under (CC BY 2.0).

Denmark is one of only six countries in the world to achieve the UN's development assistance target of 0.7% of gross national income (GNI) to foreign aid, and it has been doing so continuously since 1978.

This financial assistance, though essential, is only part of the equation. How do Denmark’s development efforts measure up in other areas — such as the usefulness of its policy advice, its influence in setting reform agendas, and its helpfulness in reform implementation — from the perspective of its partner countries?

In a new study, Danish Development Cooperation from a Partner Perspective, AidData finds that leaders from 40 low- and middle-income countries rate Denmark as a high-performing development partner. To better understand past performance and inform future strategy, Danida, the Danish International Development Agency, commissioned AidData to evaluate Danish development efforts using insights from a survey of public, private and civil society leaders who had previously worked with Denmark between 2004 and 2013 —179 in total.

The survey finds that Denmark performs well compared to a cohort of 12 other multilateral and bilateral development partners, placing in the top third on three dimensions -- agenda-setting influence, usefulness of policy advice, and helpfulness in implementation (see the chart below). This may indicate that Denmark’s strategy of long-term partnerships and focused investments in a limited number of priority countries is paying off in terms of its perceived performance.

Performance on usefulness of policy advise, agenda-setting influence, and helpfulness in reform implementation

Despite its small size, Denmark communicates with host-government counterparts at a frequency comparable to large multilateral organizations such as the World Bank and the United Nations. This higher frequency of communication may generate a performance dividend: Denmark is seen as more influential and providing useful advice in countries where survey participants reported communicating most often with Denmark.

In addition to Danida, DEval (the German government’s evaluation agency) commissioned AidData to conduct a study of German aid from a partner perspective, and will publish its results soon (update: study now available here). These studies draw upon a 2014 survey of over 6,700 decision makers in 126 low- and middle-income countries. Later this year, AidData will field an updated version of the survey as an outlet for policymakers to share their perceptions of development partners and the most pressing priorities in their countries.