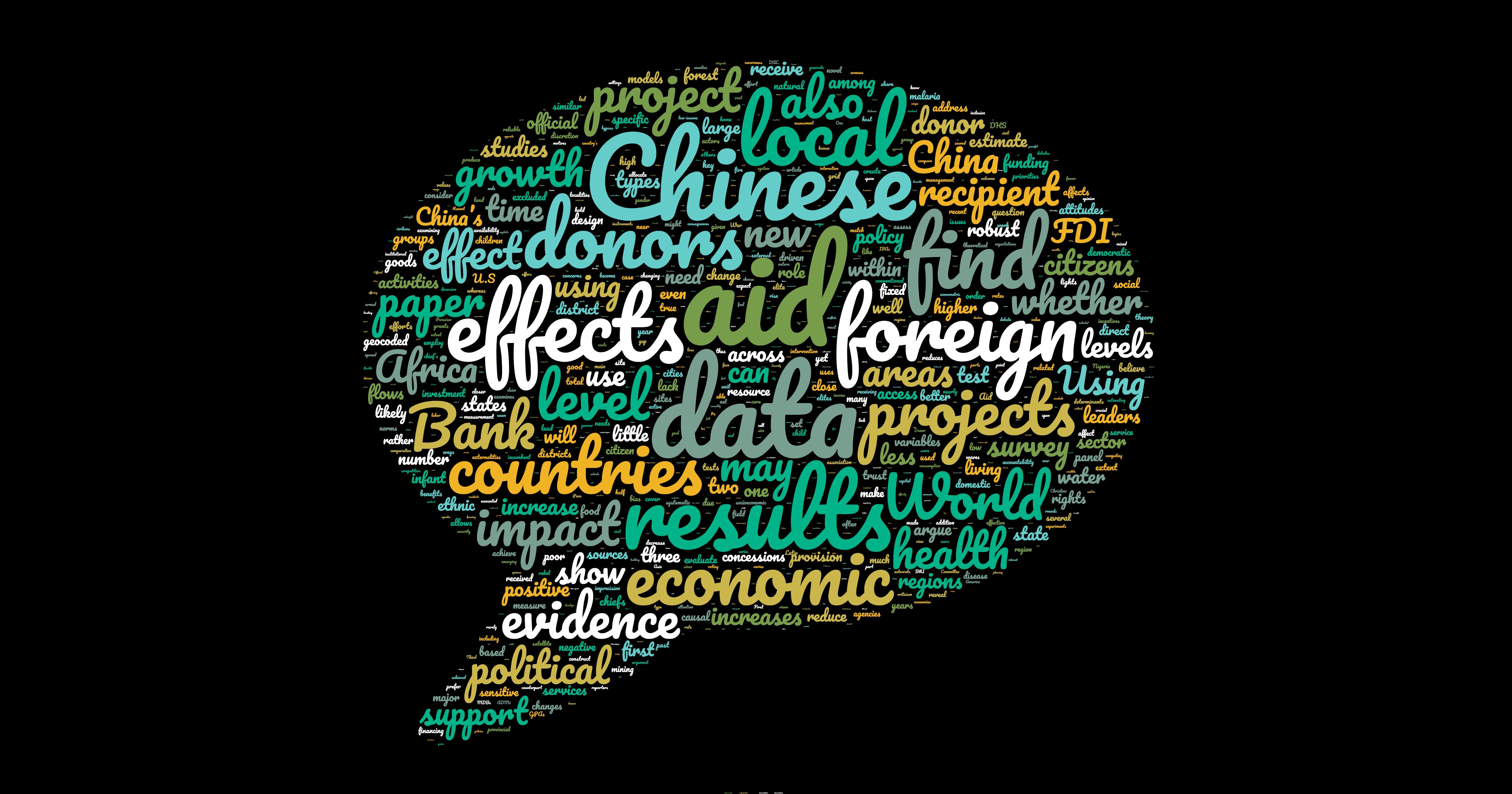 This word cloud shows the frequency of keywords in abstracts of all AidData Working Papers.

Today, AidData publishes the one hundredth entry in our working paper series. When we published the first working paper nearly six years ago, we did not know exactly where this journey would lead us.

We originally launched the series as an outgrowth of our partnership with USAID's Higher Education Solutions Network. We convened a network of over 125 scholars from around the globe to design research projects that would yield new insights about how aid is allocated and its impacts. Our goal was to enable this community of researchers to make their work freely available to each other and the public, advancing the field without waiting the years it can sometimes take for an academic publication.

Six years later, these papers have now attracted a global readership and authorship. Since late 2017 (when we launched the new version of AidData.org), the working papers have been viewed over 75,000 times, with about 36% of viewers coming from the United States. Nearly 200 authors from over 100 institutions in 20 countries have contributed papers. Over 30% of working paper authors are women. More than a third of papers have already appeared in peer-reviewed journals such as the Journal of Political Economy, the Review of International Organizations, International Studies Quarterly, the Journal of Development Economics, the Journal of Politics, and World Development.

Back in 2014, we foresaw there would be a geospatial revolution in development research. Looking at the subnational impacts of aid was a novel idea with transformative potential. And, indeed, our work to geocode data sources such as World Bank projects, Chinese official finance, and Afrobarometer surveys has opened the door to many interesting and important research investigations. Today, the development field has caught up to the idea of examining subnational aid allocation and its impacts.

What we couldn't have predicted were the follow-on ideas that those data and studies would spur. The working paper series has investigated a wide range of trends, many of them at the cutting-edge of development research. More than twenty papers have sought to measure the impact of China's rise in the international development finance landscape and the political, economic and environmental consequences. Other papers have examined the impacts (or sometimes, the lack thereof) of transparency initiatives and access to information on development.

One idea that took hold midway through the series is leveraging remotely sensed and other “big data” sources (often in conjunction with machine learning techniques) to perform quasi-experimental research, now known as geospatial impact evaluations. These methods are more relevant today than ever, as they depend on satellites that continue to orbit the earth while a virus circles down below, making field work and primary data collection difficult.

Over the last six years, the research that has appeared in the working paper series has changed. We’ve observed great leaps in the scale of many research efforts, enabled by an explosion in the availability of large-scale, remotely-sensed datasets on development outcomes. Also of note is that, increasingly, working paper submissions come from scholars not within our immediate networks, reflecting important growth in the diversity of scholars and institutions. Our goal is to have increasing submissions from researchers in the developing world, hopefully helped by our efforts to lower the barriers to using our data (and the aforementioned outcome data).

Going forward, we expect some trends in the working paper series (such as a continued focus on China and greater use of remotely-sensed data) to continue. In a similar way to how China’s rapid entry into the development sphere led to a major shift in the development arena, we expect that the shock of covid-19 will lead to a greater share of new research on the development-health nexus, especially around pandemic response and impacts. Working Paper 99, Do WHO Epidemic Declarations Matter? Evidence from the Meningitis Belt, already presages that.

Researchers who publish in AidData’s working paper series today are starting from a very different place than some of the early pioneers in the series. In 2020, they may not need (or be able) to raise much funding for primary data collection or work in the field. At the same time, there is more rigorous and robust evidence than ever on the allocation and impacts of foreign aid for these scholars to draw from and build on.

For scholars who want to make an impact on the field, the benefit of submitting a working paper to AidData’s series is that it provides a megaphone to a focused set of people who are interested in these issues. We look forward to seeing what the next one hundred AidData working papers will bring.