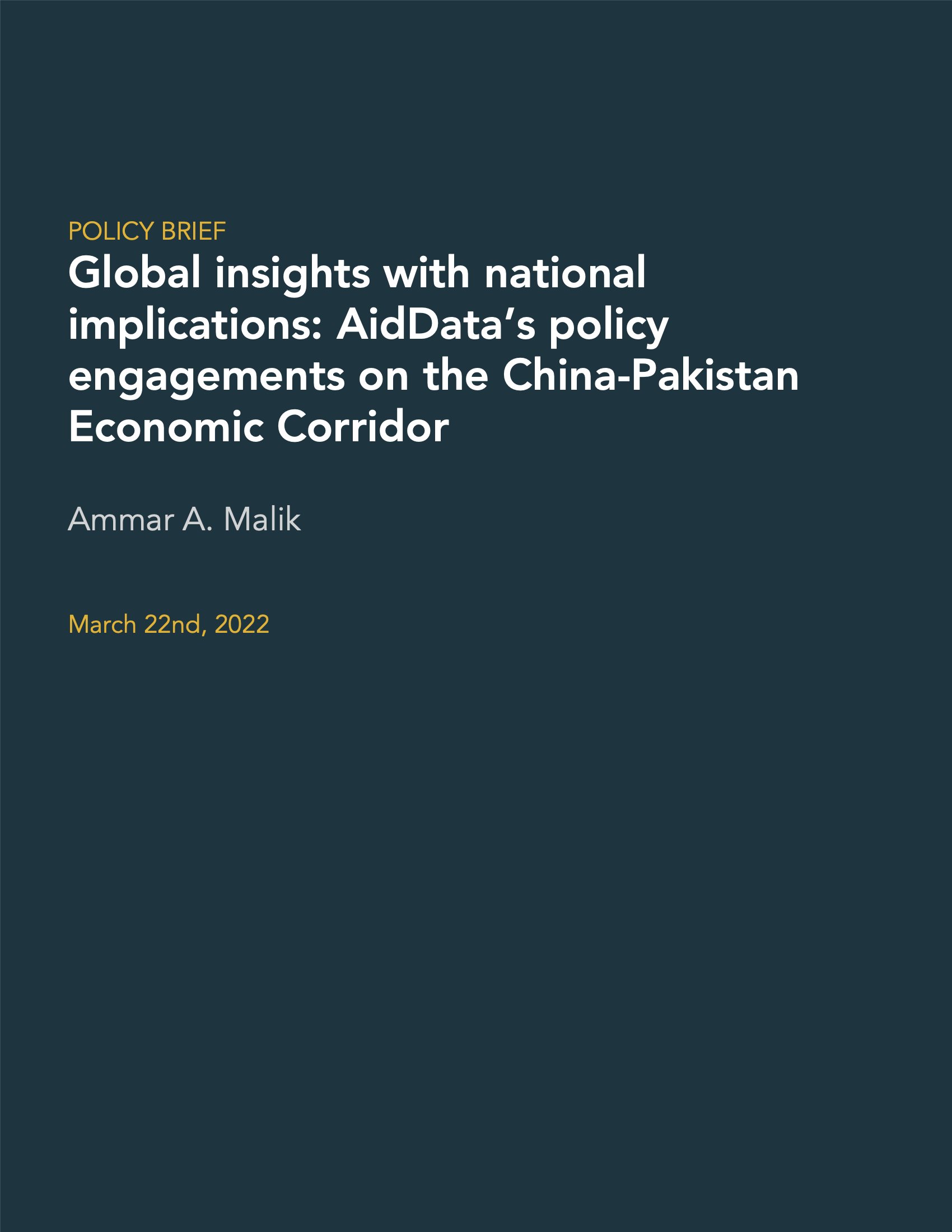 A new AidData policy brief explores the growing debt sustainability challenges of CPEC, a portfolio of Chinese-funded infrastructure projects in Pakistan worth $62 billion. 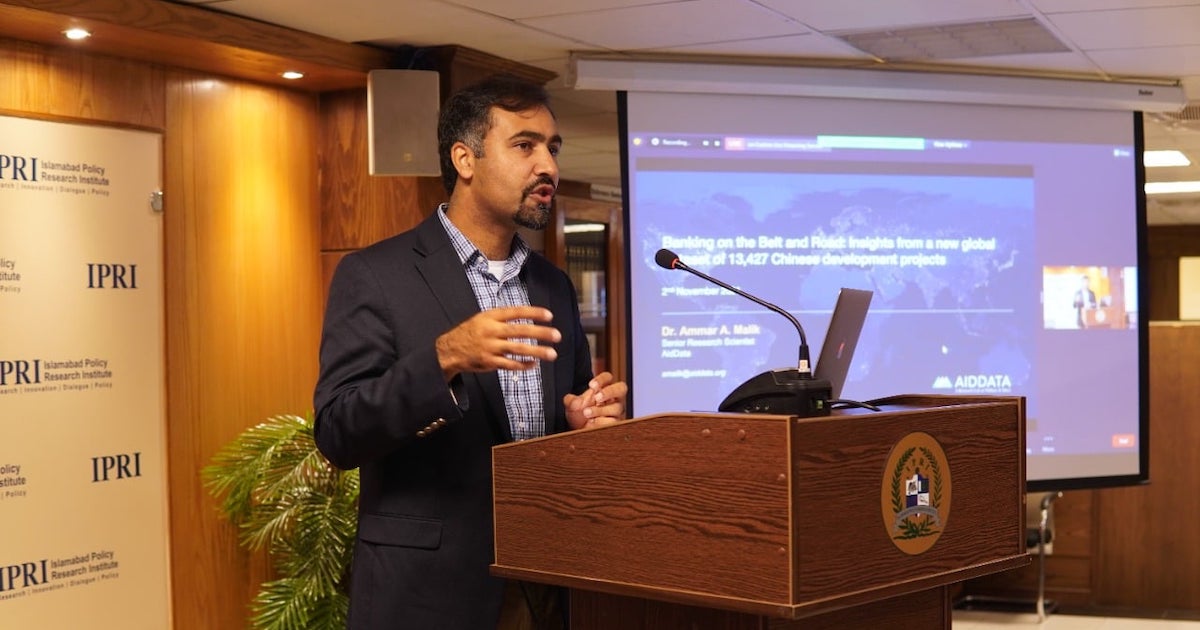 On November 2, 2021, Dr. Ammar A. Malik, senior research scientist at AidData, delivered a seminar in Islamabad, Pakistan hosted by the Islamabad Policy Research Institute, presenting key findings from Banking on the Belt and Road, including policy implications for Pakistan. Source: https://tinyurl.com/ya8ob6qy

The release in September 2021 of AidData’s latest report on Chinese global development finance, Banking on the Belt and Road (BBR), was covered by media worldwide, including more than 400 articles from outlets including the BBC, NPR, The Economist, The Financial Times, The Wall Street Journal, Die Welt, and Le Monde. The data and analysis also catalyzed vigorous debate within several countries—Indonesia, Laos, and Uganda to name just three—around the performance of big-ticket infrastructure projects that Beijing has funded in those nations.

Another such country is Pakistan, where the BBR release prompted more than a dozen news stories and editorials, focused mainly on the $62 billion China-Pakistan Economic Corridor (CPEC). A hard hitting editorial by leading English-language daily Dawn titled “Transparency needed” raised alarm over the government’s refusal “to make public the costs or conditions of the CPEC deals.” The newspaper deplored the fact that Pakistanis “get information on Chinese investments from foreign sources [AidData] rather than their own government.”

Fueled by fresh evidence from AidData, leading news anchors in Pakistan (here, here, and here) questioned why Chinese companies were not required to go through a competitive bidding process for acquiring multi-billion-dollar contracts; how the lines had been blurred between public and private debt; and whether debts from energy projects alone were sustainable for Pakistan. Media also lamented the current administration’s decision not to publish the details of CPEC agreements, despite having a history of being severely critical of previous administrations for doing the same.

Having a front-row seat to all this was Ammar A. Malik, a Senior Research Scientist who leads AidData’s Chinese Development Finance Program. Malik himself is relatively new to AidData: he joined in 2021 from Evidence for Policy Design, a research program at Harvard University’s Kennedy School, where he was director of research. Since arriving at AidData, Malik has served as one of the lead authors of Banking on the Belt and Road and overseen the launch of the report and dataset.

His team uses a data collection method called “TUFF”—for “Tracking Underreported Financial Flows”—that was pioneered by AidData. It is designed to track and report on the activities of international development financiers who have chosen not to share detailed information about their overseas activities with the Creditor Reporting System (CRS) of the Organization for Economic Cooperation and Development (OECD) or the International Aid Transparency Initiative, which were put in place to increase coordination among external funders and their host country partners. China is the single-largest official source of underreported financial flows in the world, with more than 330 government ministries and agencies, policy banks, state-owned commercial banks, and SOEs bankrolling the world's largest overseas development program.

But Malik is motivated less by the macroeconomics of the Belt and Road Initiative (BRI), and more by its local impacts on citizens in host countries. As the country inches toward political uncertainty ahead of the no-confidence motion against the Prime Minister on March 25, 2022, the Special Assistant to the Prime Minister (SAPM) on CPEC Khalid Mansoor has warned that political instability in the country could cost “huge [Chinese] investments ranging from $20 to $30 billion.”

“The Belt and Road Initiative presents a huge opportunity for low- and middle-income countries to change the trajectory of their economic development, but for me the north star is and always will be the potential for welfare gains for their citizens,” he says. “They are the true recipients of the BRI and the initiative’s ultimate success, or lack thereof, will depend on the positive differences it can make on the lives of hundreds of millions around the world still living in appalling conditions.”

Domestic media coverage in Pakistan resulted in further editorials, dialogue, statements and speeches involving civil society and high-level policymakers. Sensitive to negative coverage of the CPEC, Pakistan’s Minister for Planning Asad Umar and the Prime Minister’s Special Assistant on CPEC Affairs Khalid Mansoor responded with a press conference which was broadcast live, and several national television appearances (here and here). While acknowledging that Pakistan’s debt-to-GDP ratio was reaching unsustainable levels, the Minister proclaimed that “we do not have a China debt problem.” Criticizing the local media for reporting on public policy issues “without due verification and understanding,” the Minister claimed that CPEC projects were operating under “parliamentary oversight” and that there were no secrets in Pakistan’s dealings with Chinese state-owned financiers and contractors.

Into the fray stepped Malik, traveling to Pakistan in October 2021, where he keynoted events at the Islamabad Policy Research Institute (recording) and at Tabadlab (recording), an Islamabad-based think tank. During the visit, Malik also met with and briefed cabinet-level officials and their advisors from several ministries and agencies, engaged with Senators and former Ministers who initiated the CPEC, spoke to the media and foreign diplomats stationed in Islamabad.

“This is a tremendously rewarding aspect of our work,” says Malik, “the impact on policy in partner countries. It gets to the heart of what my team hopes to achieve: agenda-shaping, catalyzing debate with policy-relevant data and analysis that supports transparency and accountability.”

For Malik the CPEC issue is also personal.

“My interests in becoming a researcher stem from my own experience growing up in Pakistan, and seeing first-hand the vast differences between the haves and the have-nots. I grew up wondering why there are such huge discrepancies in the social and economic wellbeing of people living side by side in large cities like Lahore and Karachi. What explains these differences, why does the government consistently fail the poor, and what can be done to improve people’s living conditions? These questions have always animated me. This is partly why I began my career studying cities and urbanization in South Asia—they represent employment and greater economic opportunity, while exacerbating underlying inequities, with those same haves and have-nots living in close physical proximity.”

Today, Malik is publishing an AidData policy brief that explores the context in which CPEC was established, the CPEC theory of change, and an analysis of what has worked and what hasn’t. The brief distills from Pakistan’s experience some policy recommendations that other countries should consider if they are pursuing Special Economic Zones of their own.

Malik inherits an AidData research program that has been tracking and analyzing Beijing’s overseas efforts for more than a decade. His team includes faculty, five full-time staff members, and more than 75 research assistants. The Chinese Development Finance Program conducts primary data collection, as well as analysis and research that is designed to support decision-makers.

“Our focus is on creating a first-rate evidence base, as well as underlying methods, that are transparent, well-documented and publicly accessible for other researchers and policymakers to use.” The previous version of AidData’s global Chinese development finance dataset, released in 2017, was used or cited in more than 250 scholarly and policy research publications. (AidData’s latest global dataset of Chinese projects, released alongside BBR, can be downloaded here).

Malik’s prior research, which has focused on women's economic empowerment—with a particular focus on factors that prevent them from experiencing urban mobility (including sexual harassment) and its impact on macro-level economic outcomes—informs other cross-cutting efforts at AidData, including the newly launched Gender Research Initiative. While previously at Harvard, Malik focused on evidence-based policymaking and human capital acquisition and labor policies in the Middle East. Earlier, he earned his PhD in public policy from George Mason University, researching urban economic development and public transportation policies.

The Chinese Development Finance Program that Malik leads is one of several teams at AidData working on issues related to China.

Samantha Custer is the Director of AidData’s Policy Analysis Unit (PAU), which has recently conducted several high-profile policy-relevant research projects looking at China’s public diplomacy footprint across Asia. To implement this work, Custer has built a network of research organizations based in some 30 countries across Asia. Custer is also organizing a high-level, three-day convening in June 2022 that will bring together scholars, policymakers, media, philanthropies, and business and civil society leaders from around the world to William & Mary to better understand China’s growing reach and influence. Convening sessions will explore the implications for countries on the receiving end of Beijing’s overtures, and possible response scenarios for the U.S. and its allies.

Ariel BenYishay is the Director of AidData’s Research and Evaluation Unit (REU), which has undertaken several studies that evaluate the forest cover impacts of Chinese government-financed highway construction and rehabilitation projects. His team is now seeking to leverage its expertise in geospatial data and analysis to evaluate the impacts of Chinese government-financed energy projects and other infrastructure projects on the environmental conditions and livelihoods of local communities in host countries.

AidData’s Executive Director Brad Parks has spent the last ten years studying the aims and impacts of China’s overseas development program. Frequently consulted by the media, his latest research focuses on Chinese lending practices and the future of the Belt and Road Initiative. Much of this work is undertaken in collaboration with a network of researchers from the University of Hong Kong, Heidelberg University, the University of Göttingen, the Center for Global Development, the Peterson Institute for International Economics, and the Kiel Institute for the World Economy. Parks is one of five co-authors on a highly-anticipated new book, Banking on Beijing, which will be published by Cambridge University Press in April 2022. He is also a coauthor of How China Lends, Bargaining with Beijing, Banking on the Belt and Road, and Hidden Debt Exposure to China.